Two anonymous volunteers at Arlington National Cemetery are being lauded for their compassion on social media, after photos were posted... 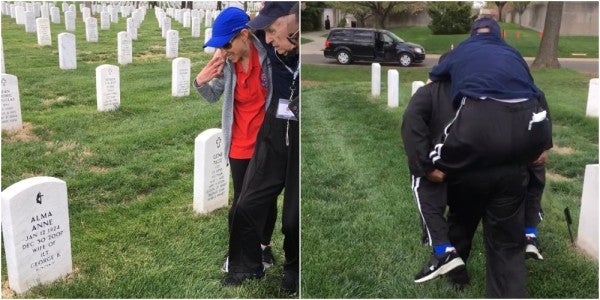 The vet was George Boone, who served as a B-25 pilot during World War II and became a prisoner of war when he was shot down over Romania in 1943, reported WTTG Fox.

He was at the cemetery in Washington DC with his son, Jon, visiting the grave of his wife, Alma, who died in 2007, the station reported. In their rush, the two forgot Boone's wheelchair, said Fox News.

EXCLUSIVE: @ArlingtonNatl employee carries 96yo WWII veteran to visit wife’s grave after they forgot his wheelchair in rush to get him back to his group. The veteran reflects on the emotional reunion at 8 on #FOX5Plus. @fox5dc pic.twitter.com/qHAeSKdf1J

George Boone figured that 70 yards away was the closest he could get to his late wife's gravesite, but then two observers stepped up to help him, reported CNN. The couple was married 56 years, according to WTTG Fox. His wife was eligible to be buried in the cemetery as a military spouse.

The two made a chair out of their arms and lifted Boone all the way to his wife's resting place, where they held him up for 10 minutes while he paid his respects, CNN reported. The male volunteer then carried the veteran back to the car on his own, CNN reported.

One was an employee of the cemetery and the other was a volunteer, reported WTTG.

Jon Boone's photos of his father being carried piggyback has prompted hundreds of responses on social media.

“That's about a picture of America if there ever was one,” posted Martin Braspennix.

“Compassion is very much alive in this country,” said Thomas Anderson on Facebook.