Army 1st Lt. Max Pippa is, by definition, Army strong. At the peak of his powerlifting career, he could bench... 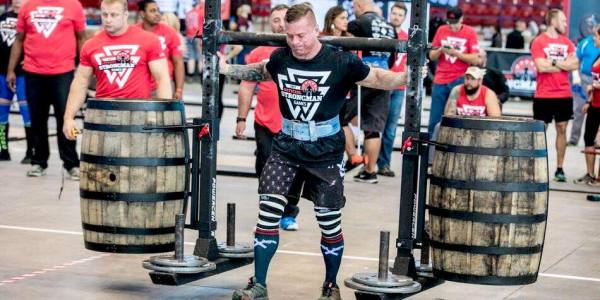 At the peak of his powerlifting career, he could bench press eight times the average infantry rifleman’s load (405 pounds x 2), front squat an underweight male grizzly bear (495 pounds), and deadlift the equivalent of the B61 nuclear bomb (700 lbs) that was once the backbone of the U.S. stockpile. He weighed 285 at the time, with guns on par with legendary bodybuilder and Arnold Schwarzenegger mentor Reg Park — and in December, he came second in the Under 90 kilograms class at the 2017 Official Strongman Games in Raleigh, North Carolina, where his feats of strength included deadlifting a Jeep Wrangler and hauling a 650-pound metal frame around the arena.

Pippa, now 27 (and 225 pounds) and currently assigned to the 1st Battalion (Airborne), 501st Infantry Regiment at Joint Base Elmendorf-Richardson in Alaska, says being “strong” doesn’t actually make you Army strong, the type of strong you need to hump gear miles before kicking down doors. And although Pippa’s been powerlifting since he was 15, he only discovered the real definition of ‘Army strong’ when he joined the ROTC program at the University of Missouri.

Task & Purpose caught up with Pippa to chat about his workouts and the meaning of strength in the modern Army. Answers have been edited for brevity.

Task & Purpose: You mentioned that your powerlifting regime and Army PT were somewhat incompatible.

Pippa: When I joined the ROTC, I realized that I needed to take a break from powerlifting for PT simply because I was horrible at endurance. I had such an anaerobic bias towards short-duration, high-intensity workouts that the first time I did my two-mile I couldn’t do anything for about 10 minutes afterward. I was dead.

I knew I was going to have to lose some weight and come down from 230. And that meant, at least for a time, putting something I loved on the backburner.

You were coming from a powerlifting build and slimming down. What did you do to maintain that core strength?

It was very simple and basic movements: squatting, overhead pressing, deadlifting. These are all things that anyone who is a human being who wants to be able to do human being things better or more efficiently should do. Carrying anything, putting anything over your head, triple extension movements, jumping — all of that translates into real life.

There are no secret training tricks, really. Everything is functional movements. I recommend focusing most of your energy on core movements. If you only have an hour a day to train, spend 50 minutes of that hour on something that matters: trap deadlift, squats, a compound movement. You’ll get more bang for your buck out of that … hell, you’ll get more out of five hard sets of squats than 10 to 12 sets on different leg machines.

How do you find the time to maintain while on active duty?

Here’s a trick for the average dude who wants to get more out of the gym: Spend 15-20 minutes the night before actually prepping your food the next day.

Food is honestly the biggest challenge with being active duty, and not because you’re getting not enough time to get a meal. You only need 2 cups of rice and 8 oz meat and vegetable, and that takes maybe 10 minutes to eat. Food prep and sleep are the two biggest things that people in the military botch the most. Even if you're stuck in the barracks with no kitchen, microwaveable packs of Uncle Ben’s rice and tuna with almonds are better than going 5 or 6 hours without eating.

Look, it’s about managing expectations. A lot of soldiers see their idols and the meals they post on Instagram and the shit they do in a magazine and they get disheartened about what they can and can’t do — they believe it’s not worth the struggle. Christ, there are fucking guys in prison eating nothing but Ramen and walking around built like a mountain.

Wait. How strong are you … really?

The most I’ve lifted on 2-inch axles is 330 from the ground to overhead.

Could you… could you punch a man’s heart so hard it explodes in his chest?

Do you think civilians have an image of the uber-bulky, Arnold-Schwarzenegger-in Predator view of combat troops, still?

The Arnold … man, that's nobody I'd want on my fireteam or the platoon. Dude, if he goes down it would take that entire fireteam to carry that guy.

Each person brings something different to the table with their own physical talents —guys in my platoons or companies who are 160-pound dudes growing up on a farm and can ruck as hard as any of the big boys, and I've seen big guys who are huge pussies who crawl out after an hour or two. There is no body type that is the best — there is no super soldier.

Look at the top-tier units in the U.S. military: Most of those guys who are the biggest badasses… they look like normal dudes. There’s no way a dude who’s 250-260 with insane abs is going to be able to go the distance day and night with only an hour of sleep. He’s going to be too much of a debt.

I have a dumb question.

If you could fight any historical figure, living or dead, who would it be?

In their prime? Or, like, FDR on his deathbed?

He’s … not a historical figure.

He’s as historical a figure as there has ever been. Rewatch the first three minutes of that movie and you’ll rethink that statement.

Do you have one last piece of fitness advice?

Look at everything you’re doing and think about how you’re going to apply it to your end product, whether you’re an athlete or you’re thinking about your fireteam. Have a reason for what you’re doing. Do you really need to squat 500 pounds to be an effective soldier?

If you don’t have a reason for doing something, then it’s just fluff. And if you’re doing it just to be in the gym, then what the fuck is that doing for you?