Behind The Military Spouse Stereotypes, There’s Always Some Truth

I recently read an article on military spouses calling for the end of spouse bashing. The piece, published here on... 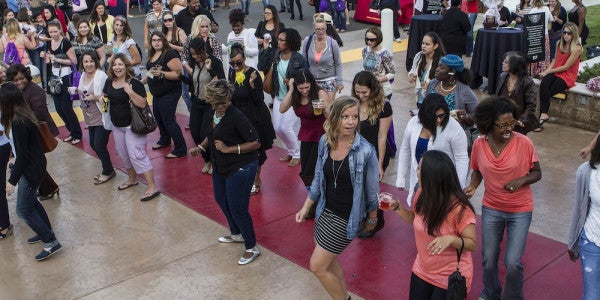 I recently read an article on military spouses calling for the end of spouse bashing. The piece, published here on Task & Purpose, was refreshing as it offered an alternative perspective from the usual beat down military wives receive in the media. The author instead put these spouses on a pedestal, glorifying them into an almost saint-like position. But here’s the thing: military wives cover both ends of the spectrum. I know. I was one.

For nearly 15 years, I was the spouse of a Navy submariner. It wasn’t just any submarine, but the big boats, the Tridents. I was one of the “lucky” ones. My husband only went to sea three months at a time. Three months out, two-and-a-half months in port. I say lucky because my husband never deployed to a combat zone. Regardless of his career choice, I was a Navy wife nonetheless. I had to take care of the car and the bills, and put my life on perpetual hold while he was away. We never had kids so I don’t know the struggles of taking children to the clinic, alone. That didn’t make me less of a spouse, or less entitled to voice my opinion.

I lived and worked on base for a good deal of my time as a spouse. I got to know many other spouses, from the Navy, as well as the other branches. That also means I got to witness the very stereotypes some are hoping to prevent from spreading. What do I mean? At the enlisted club on the very night a boat or ship pulled out, I witnessed spouses pocket their wedding rings and to go hit on other sailors. I had a coworker email her husband in the middle of a West Pacific deployment to tell him she was leaving him for another man. I’ve been on the receiving end of an unbraiding because I didn’t give special treatment to the wife of “Lieutenant Commander So-and-So.”

These were not isolated incidents. I’ve seen them play out over and over during my years as a spouse, to the point where I believe the “stereotype” of the military wife. It even exists outside the military. I was recently called a name by a woman because my husband was enlisted, whereas she came from a family of officers.

Despite being in the deep end of the stereotype pool, I did know plenty of strong, admirable wives. I still do. One friend put herself through college, had a child, began a career and volunteered as ombudsman throughout her husband’s career in the Navy. Another childless wife and her husband made it a point to host single sailors during holidays, even when her husband was deployed. I currently know an Army spouse who is raising three beautiful, bright children, despite her husband’s frequent travel. I could go on.

There is a middle ground. Military spouses fit the negative stereotypes, as well as the strong, saintly depictions we want spouses to be. What we need to do is be realistic about all of it. Military spouses are a special breed of people trying to endure the military lifestyle, from a three-month sea deployment to a year’s tour in Afghanistan. But the thing is, spouses are still just people, and there will be good and bad people everywhere. As with any community, there will be gossip, jealousy, and a perceived hierarchy. Military spouses don’t have superpowers; they just know when to be strong. Or not.

Some military spouses, or member of the military community may disagree. Some may tell me I don’t know what I’m talking about because my husband was never in a war zone, or because I didn’t have children. The thing is I don’t care. This is my experience as a military spouse. And I know when to be strong.