New Air Force recruiting pitch: It doesn’t matter what you look like, just that you can kick enemy ass 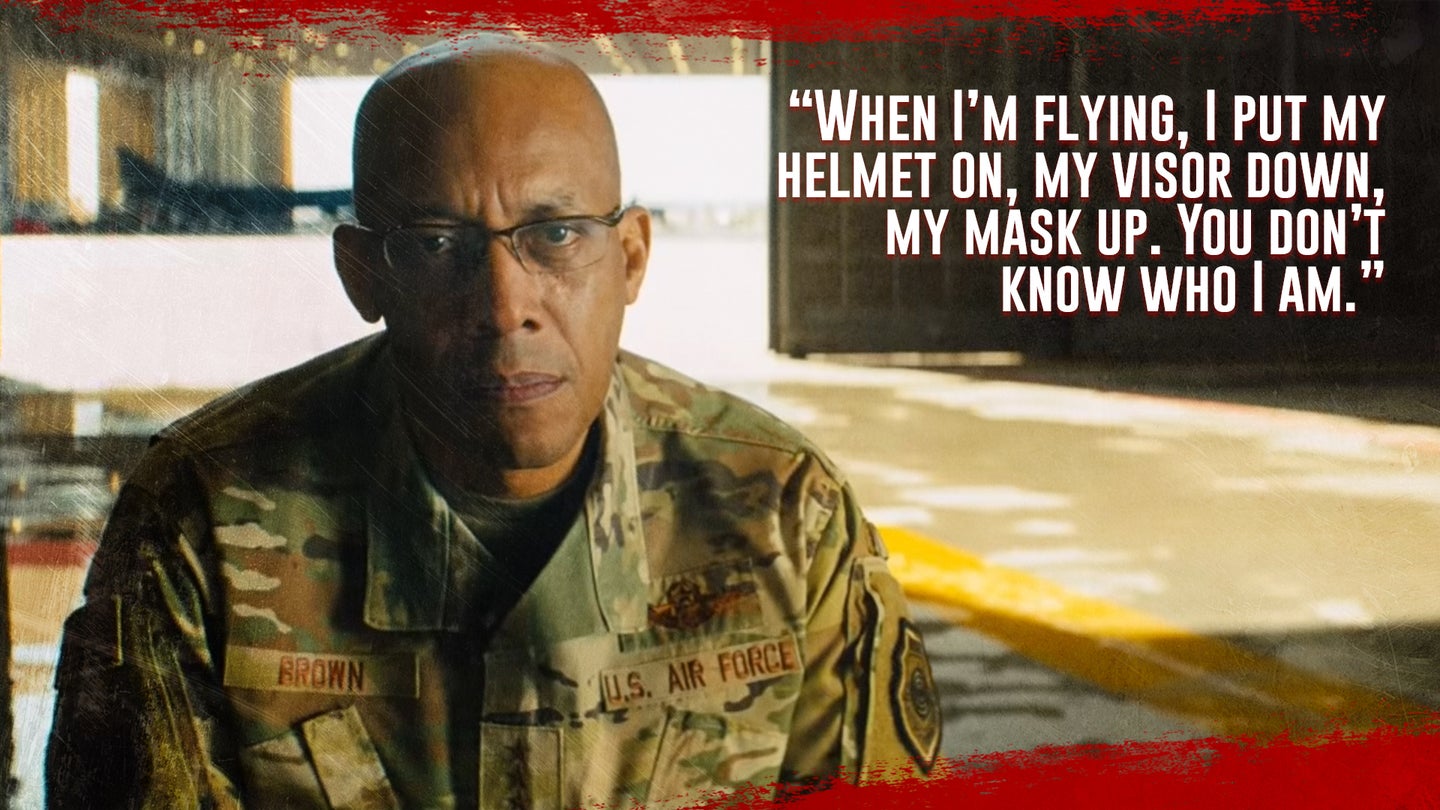 The Air Force’s top general delivered a laser-guided kick to the feels this weekend with a 30-second recruiting commercial that emphasizes the branch’s commitment to diversity in its ranks.

In the brief 30-second ad spot, which first aired on Saturday during the NBA Finals pregame, Gen. Charles “CQ” Brown Jr. sits alone in an aircraft hangar. As the camera slowly zooms in towards him, he says that the color of his skin doesn’t matter when he’s in the cockpit.

“When I’m flying, I put my helmet on, my visor down, my mask up,” said the F-16 fighter pilot, who became the first Black service chief in U.S. history last August. “You don’t know who I am — whether I’m African American, Asian American, Hispanic, White, male or female. You just know I’m an American airman, kicking your butt.”

In between shots of Brown’s face are flashes of Air Force jets, helicopters, gunships and the legendary A-10 attack plane, along with a very cool drumbeat playing in the background. The visual emphasis on the aircraft, rather than the airmen flying them, seems to underscore Brown’s point that it doesn’t matter what you look like or identify as, just so long as you can “kick butt.”

And the commercial certainly seemed to resonate with some on YouTube, most of whom responded with variations of “Freaking Badass!” and “Hell yes!”

The appeal isn’t much of a surprise. The ad’s message plays to a common sentiment in the military: When you’re in a fight, it doesn’t matter where you came from, what you look like, what your politics are. What matters is the job you’re there to do, and how well you can do it.

The Air Force commercial, titled “Helmet,” also stands out two months after another military branch, the U.S. Army, came under heavy fire for highlighting diversity in its own recruiting efforts. In a short video titled “Emma,” Cpl. Emma Malonelord describes how growing up with two strong moms influenced her decision to join the Army.

The ad was one of several Army commercials that were produced as part of a campaign called “The Calling,” a series that focused on non-White male soldiers. Almost immediately, it faced criticism — to the point that the service shut down the comment section for the videos on YouTube because people were making “borderline abusive” remarks towards the soldiers in them, said Laura DeFrancisco, a spokesperson for Army marketing.

The controversy picked up steam when Sen. Ted Cruz (R-Texas) joined the discussion, tweeting “Holy crap. Perhaps a woke, emasculated military is not the best idea….,” along with a video that included snippets of Russian military propaganda.

Where the Army ads emphasized the faces and personal stories of the soldiers themselves, the Air Force took a different tack by focusing on the personal experience of Gen. Brown and interspersing it with examples of what “kicking butt” looks like in that service.

“If you can do the job, we’ve got an opportunity for you,” said Barry Dickey, director of strategic marketing for the Air Force Recruiting Service, in a press release about the ad. “At the same time, I also get the message that the Air Force is about winning with airpower, period.”

It appears to be working so far, since the YouTube comments section for the ad is still alive and kicking. But what’s interesting about the Air Force commercial’s emphasis on diversity is that it focuses on one aspect of military life: combat. While that aspect is arguably the most important part of service, it’s becoming more of a rarety in a military that is pulling out of its longest-running combat theater in Afghanistan.

The advertisement works to portray the Air Force as a diverse and inclusive space by emphasizing that airmen are measured by their skill in combat rather than by how they appear or identify themselves. However, this approach fails to take into account that many of the Air Force’s incidents of racism or discrimination don’t occur while wrapped up in ‘helmet, visor, mask,’ combat situations, as Brown puts it. Instead, they unfold on the ground, in the offices, barracks rooms, parking lots, hangars and court chambers on military bases at home and abroad.

Back in December, a sweeping review by the Air Force inspector general outlined the scope of the problem facing the service. Among the report’s many findings were that Black airmen are disproportionately punished and promoted more slowly when compared to their White peers:

The review was part of Brown and other top Air Force officials’ larger effort to get more female airmen or airmen of color in the service. In particular, the branch needs pilots as the military struggles to keep its aviators from leaving for lucrative commercial airlines contracts.

“When that person walks out the door with all that knowledge — sure they can take off and land an F-16 — but they have all that wealth of knowledge and experience, and they walk out the door with it, it’s a huge blow,” Tobias Switzer, a fellow with the Center for Strategic and International Studies and an Air Force colonel and special operations helicopter pilot, said in June.

If the commercial’s message reaches its intended audience, then diversity in the Air Force pilot corps has nowhere to go but up. Only about 2 percent of the 15,000 active duty Air Force pilots are Black, and Black service members are underrepresented in the upper enlisted and officer ranks, according to the branch’s December racial disparity review. Brown himself sometimes struggled with being the only Black pilot in the room.

“I’m thinking about wearing the same flight suit with the same wings on my chest as my peers and being questioned by another military member ‘are you a pilot?’” he said in a 2020 video. “I’m thinking about being a captain at the O-club with my squadron and being told by other African-Americans that I wasn’t black enough since I was spending more time with my squadron than with them.”

Not that it stopped him from gathering more than 2,900 flying hours, 130 of which were in combat. One could say he ‘kicked butt,’ and branch leaders hope others like him will achieve a similar effect on target.

“As airmen, we’re committed to ensuring we have the most capable and lethal air power in the world,” said Maj. Gen. Ed Thomas, commander of the Air Force Recruiting Service. “We want America’s best — the best from all of America — to come join us.