A 71-year-old white woman has been arrested for assaulting two uniformed Army Reserve captains — one of them pregnant —... 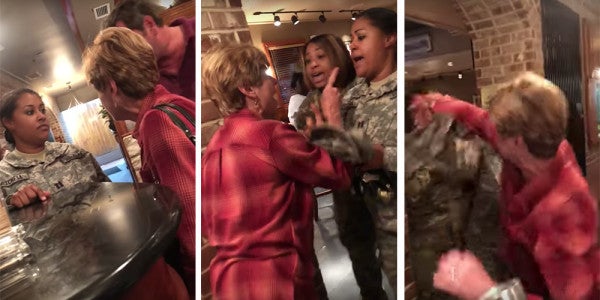 A 71-year-old white woman has been arrested for assaulting two uniformed Army Reserve captains — one of them pregnant — in a Macon, Ga., Cheddars after she and her large son taunted the officers as “black lesbian bitches” over a parking-space dispute — an incident that one disturbed restaurant patron captured in a now-viral video.

That woman, Judy James Tucker, was charged with battery and left the custody of the Bibb County Sheriff's Office on $650 bail after the incident Saturday; she “told deputies it all started because she's white and it was a race issue,” the New York Times reports.

Embroiled in the bizarre incident were Cpts. Stephanie Mitchell, 34, and Treasure Sharpe, 27, who have served for 17 years and 10 years, respectively. According to the Daily Dot, their uniforms and their relatively civil demeanors did nothing to endear them to Tucker and her towering adult child:

The report from the arresting deputy, Stephen Phipps, states Mitchell and Sharpe’s car was backing into a parking space when Tucker’s son approached them and told them to “learn how to park” before calling them “dumb bitches”…

Once inside the restaurant, the son again approached the women and called them “Black lesbian bitches,” at which point Mitchell tried to calm the situation by telling him to refrain from swearing and name calling.

Tucker then approached the women, too, telling them, “You were getting in our way while we tried to park”…

The aggrieved white folks then slathered themselves in honor by lunging after Sharpe's cellphone, which escalated things quickly:

Tucker came back at the women with “rage and force,” and began “swinging at [Sharpe] striking her in the face.” She later admitted to the deputy that she hit one of the women, but only because “they hurt her hand,” referring to when Mitchell holding her arm back from Sharpe. When Sharpe told the Tuckers she was pregnant, the son asked, “Oh really, by her?” pointing to Mitchell.

By that point, a disgusted restaurant full of people was trying to calm down Judy James and her boy and taping the whole thing. Local deputies concluded in their report that “With all of the lunging and slapping happening, it was never shown through cell phone video that Mrs. Mitchell or Mrs. Sharpe did anything wrong.”

In a statement to the Daily Dot, a spokesman for the Army Reserve confirmed that the service is “aware of an incident that occurred over the weekend involving two of our Soldiers in Macon,” but added that it “is the subject of an ongoing police investigation and it is improper for us to comment on the outcome.”

Cheddar's, however, is far less sanguine about the redneck rampage at their restaurant's hostess stand. “We were appalled by the behavior of the individuals who confronted the two female service members,” a spokeswoman told the Macon Telegraph. Such behavior flies in the face of our values and those individuals are no longer welcome in our restaurant.” Local Mercer University also quickly registered its disapproval of Judy James Tucker, who apparently dabbles in art education there: “She has occasionally taught an art class in the past,” a spokesman told the Telegraph, “but will not be teaching at Mercer in the future.”