One of the great parenting myths is that you can shape your life events until you’re ready. The truth is,... 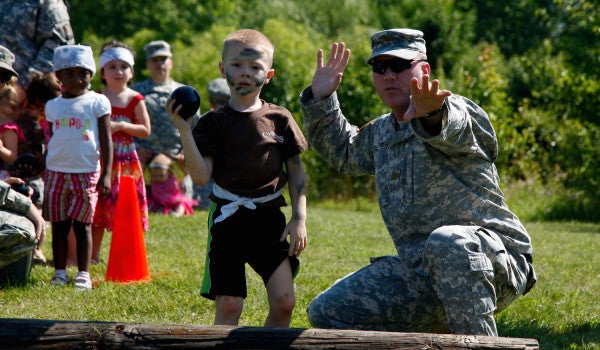 One of the great parenting myths is that you can shape your life events until you’re ready. The truth is, no good time to have a child. As an adoptive parent, I found out 48 hours prior to picking up my daughter at the hospital that I was going to be a dad. My wife and I immediately went into crisis action planning, and with a little help from Amazon and one-day shipping, we were barely ready to embark on this adventure.

All of the births viewed on Skype during deployment or just missed out on entirely are testament to the resolve of strong military families. Luckily for service members, there are a few useful skills that the military intentionally or unintentionally taught us that are critical for both new and seasoned parents.

An unfortunate part of the military endeavor, even for pilots who get crew rest, is that the military wreaks havoc on your sleep. From staff duty to overnight- and multi-day missions in the hinterlands of Afghanistan, your body becomes accustomed to sleeping anywhere at any time whenever you get a chance.

With my newborn daughter, I had the night rotation because I would typically doze off as she ate and could half-asleep rock her back to sleep without complete loss of my abilities the next day. I worked a late shift and would often half sleep at the foot of our bed until the newborn woke up needing to be fed. I spent a lot of time rocking in a lazy boy catching up on Netflix.

2. We’re well-versed in Murphy’s Law: Be prepared for the unexpected.

We do pre-combat checks and utilize checklists to make sure we are ready in the event of an unplanned occurrence in combat. I used to carry extra radio components in addition to batteries so that I didn’t lose radio connectivity when I needed it the most.

As a parent, having extra wipes and diapers, food, coloring books, batteries available at any given time comes in handy. My family car looked like a post-apocalypse preppers dream, if they were preparing for babies and not the zombie apocalypse. On a seemingly quiet night on I-81, the most epic diaper blow out of all time resulted in going through our basic load of counter-poo ammo and luckily that reserve in the trunk bailed us out of a nasty situation.

3. We know how to pack light and improvise.

There’s a timeless scene in the movie “Platoon” where a squad leader unburdens the extra junk from Charlie Sheen’s character before an ambush patrol. New parents are no different.

Even though you need to be prepared, nobody wants to carry a full nursery on their back to the zoo, the store, or the playground. Service members know how to be resourceful, invest in lightweight kit, and if in doubt, run home for a resupply. Regular resupplies through recurring subscription-based services are necessary to keep ready. I went from having a pretty bulky backpack to a manbag/tactical diaper bag to stuffing a baby bottle in one back pocket and some cheerios in a ziploc in the other. After strapping the baby to my chest in the ingenious Scandinavian baby battle rig, we were ready to roll out the door. For extended patrols, a small bag of top five items comes in handy, but don’t go crazy. Use the tools available, and if necessary improvise.

4. We’re skilled in managing the message.

Information warfare and crafting the message are all important at both the tactical and strategic level, whether influencing village elders, media, or your higher headquarters. What you say is only partially as important as how you say it.

For all of the PSYOPs and information warfare folks who’ve crafted the counterinsurgency message, managing information flow to pesky relatives, friends, and in-laws keeps the parents happy and bother free. A few Facebook posts of cute baby activities will usually keep the message positive and also maintain the appearance that you and your baby battle buddy know what you are doing. This will keep the never-ending stream of suggestions from dragging you down.

In basic training, we’re all taught how to crawl, bound between objects, and rush to avoid targeting or gunfire. In combat, we learned how to hide from projectiles fired by various baddies trying to ruin our days. Babies and toddlers are no different in their targeting.

As a new dad, I quickly learned the value in quick reflexes and sensing impending projectiles in order to dodge their damage. Better to clean it off the floor than your face. Individual movement techniques and quick reflexes as well as an available cloth will protect you from projectile vomit and other substances during those sick days or diaper changes. Also low-crawling technique is useful in teaching your child to initiate movement.

After years of soldier shenanigans and Afghan antics, I didn’t think I could be surprised by people anymore. There are numerous stories of the often stupid and humorous things that service members will do especially when alcohol is involved.

Often we attempt to protect and shape our environment to protect these individuals from hurting themselves via safety briefs, mandatory training, and safety stand down days. Even the best baby-proofed house will have vulnerabilities and eventual surprises when the kid decides that the dog food looks extra yummy one day. When I looked down as my daughter tasted and rejected the dog kibbles, I knew she was at the top of the food chain.

In mission command, the ultimate goal of the military commander is not to overly control his forces, but to let the subordinates take charge of their individual mission within the commander’s intent. As a commander, you can’t control everything and have to learn to let go.

When the kid eats the dog food, or decides to cover herself head to toe in sun lotion, while you are calling poison control take a deep breath and laugh. The ridiculousness of child raising in the modern world is best solved with a lot of laughter. Letting go is important because eventually your little bundle of trouble is going to grow up and embark on a world where you can only guide their interactions, not control them. I learned that expectations of a child’s actions can cause a ton of stress, but by appreciating their development, I was able to have some joy in the process.

8. We’ve had enough resiliency training to know when to focus on the good stuff.

If you’ve been in the Army in the last five years, chances are you’ve suffered through some resiliency training. While a well-intentioned program, it’s become the butt of many jokes in the force. Two highlights of the training: a reminder to be like the honey badger and roll with the punches.

My favorite tenet is to remember to focus on the good things that happen. The joy of being a parent for me has always outweighed the craziness even on the worst days. I might have a soul-crushing day at work, or learn I lost a friend overseas or to suicide, but at the end of the day, I get to come home to the craziest, funniest, future warrior princess.

As military leaders or service members, we have to trust that our training and ethos will influence our subordinates and peers to do the right thing. We are also taught that we can’t be everywhere at once or micromanage our way to success.

I learned this lesson at the playground, which is the ultimate battlefield trainer of the toddler. It teaches motor skills, social skills, and a fearless attitude to leap between structures. Furthermore it presents the ability to deal with conflict and enter a mosh pit of toddler mayhem. It also teaches parents to embrace rule seven and avoid hovering over their kid. I learned that I was holding my kid back; she was ready to leap off of a platform and I wasn’t, but only through experimentation would she learn her limits. This doesn’t mean you should be the parent with your nose in a smartphone, but like the military taught you, let your kids learn from their mistakes.

10. Our families and loved ones are equipped to handle anything.

Beyond platitudes, I learned during my two deployments the strength and value of the military family.

My wife and partner over ten years of military misadventures and tireless mom to our daughter deserves a lot of credit — much more than I could ever impart. She works fulltime from home for a defense consultant while our kid creates mayhem in the background. She’s managed this while I’ve been deployed and away at training. Our partners, families, and friends deserve a ton of credit and they truly do help each service member out. I try to keep that in mind when I complain about what a “rough” day I had, less I have to use rule five and dodge a bottle of wine being thrown at my head by an rightfully irate spouse.

The adventure of being a military professional has been frustrating on a daily basis, but ultimately rewarding. The lessons of being a parent and the patience it has taught me have only made me a better military leader. Where I once saw cogs in the great Army machine, I now see sons and daughters who are looking not only for a capable leader, but someone that will ensure that they can see their families again.