The Grass Isn’t Always Greener: Why Life Is Harder As A Dual-Military Family In The Reserves

Welcome to The Bridge, a regular column from Andrea N. Goldstein on the experience and challenges of transitioning from the military to civilian... 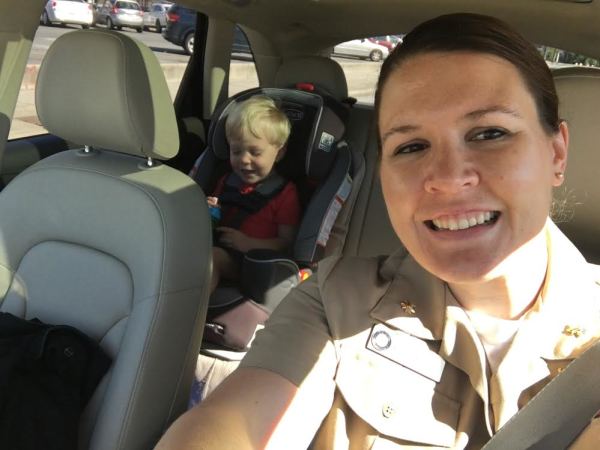 There is an age-old saying, “If the Navy wanted you to have a family, then it would have issued you one in your seabag.”

But in a force where women are substantially still the minority group, it’s becoming more challenging to recruit and retain women in both the officer and enlisted ranks without provisions and accommodations that provide women the support and ability to grow their families while serving.

Many service women in dual-military marriages leave active duty service and transition to the Reserves in order to raise families with the hopes of finding better a work-life balance. But the reality is that being an active duty-Reserve family with children can be even more challenging than if both members serve on active duty.

My husband is an active duty naval officer and I’m an officer in the Navy Reserve. Together, we have two toddlers.

When I transitioned to the Reserves, I thought it would be fairly manageable to balance a Reserve career with my husband’s active duty career and build a family. But as I’ve progressed through the ranks, had two children along the way, all the while having to carefully balance it alongside my husband’s military career, I’ve come to realize that it’s, in fact, much harder than many people realize.

And when I discuss these challenges with my fellow Reserve service women who also have active duty spouses and children, I’m finding that rather than having policies in place to support us, like our active duty sisters do, we are often left to fend for ourselves with either absent or vague guidance.

According to the Defense Advisory Committee on Women in the Service 2017 Annual Report, almost one quarter of active duty women are in a dual-military marriage.

When I polled my own community of female Navy Reserve officers asking why they left active duty service, the overwhelming response was because they were in a dual-military relationship or marriage and wanted children.

The majority of military women don’t see raising a family and having two active duty parents as a feasible, stable structure on which to raise a family.

And though the Reserves may appear to be a good opportunity to “off ramp” during a time when women are looking to build families, pursue other professional passions and support a spouse’s military career, the Reserves don’t offer the same maternity policy support, or even dual-military support that women on active duty experience.

The Department of Defense set the tone with its announcement of a 12-week paid maternity leave policy several years ago. Bravo, DoD.

The Navy launched the Military Parental Leave Program this year that enhances both parents’ abilities to take parental leave. It’s a great step in the right direction.

But that policy is for active duty women and reservists serving on active duty. The Navy Reserve policy (COMNAVRESFOR 6000.1E) only addresses the medical classification a woman receives when she’s pregnant and then her mobilization deferment for the 12 months following birth.

Rather than having set policy, we are reliant on our leadership being supportive and understanding a mother’s need for “time off” while still having to complete the same annual operational requirements.

A policy that denotes that Reserve women are exempt from drilling for the six weeks during maternity convalescent leave (MCL) after delivery and the six weeks of primary caregiver leave (PCL) after an adoption, but also are entitled to the equivalent paid drill periods that would have occurred in that timeframe, would ensure that a Reserve service woman is provided the time to focus on her new child, while also ensuring she’s paid for the equivalent amount of work that would normally be conducted.

Since we are not dual active duty families, our children don’t qualify for dual-military precedence at base childcare facilities. I recognize that childcare is an issue throughout not just the military, but society in general, and the challenges we face are not unlike that of any other dual-working families.

But Reserve orders are often short-notice and don’t allow the ample waitlist time, thus forcing us to take the expensive childcare route. As military families, we often don’t have access to extended family in the area or must resort to either transporting children or extended family in order to have coverage to satisfy Reserve requirements.

Quite often, the cost of childcare often cancels out the cost of serving. The ability to have access to installation CDCs for drill weekends, annual training periods and longer orders would enable us more flexibility to support our mission and be vital contributing members of our units who aren’t continuously limited by finding childcare.

One of the hardest parts of military life is managing the deployment tempo. Double that tempo for dual-military families. In the time that my husband and I have been together, we’ve endured countless deployments, one of those being my own before we had kids.

However, now as a Reservist, I’m creeping to the top of the deployment list and the timing is coinciding right in the middle of when we anticipate my husband going back to sea in a command position. Two deployed parents is one of the leading reasons why I left active duty service and it seems like we’re right back where we started. But the challenging part is that if I were on active duty, the likelihood of being in this position would be fairly slim unless we voluntarily chose to be in deploying roles at the same time.

The Military Couple and Single Parent Policy (MILPERSMAN 1300-1000) states that military couples will not be involuntarily assigned to simultaneous sea duty tours. If a similar policy existed for Reservists with active duty spouses, this would allow the Navy family to remain intact, rather than having two simultaneously deployed parents and alleviate an inordinate amount of stress during an already stressful time due to the active duty member’s deploying environment.

I love my Navy, my sailors and the work I have the privilege of doing. I also love being able to support my husband’s military career and support the military spouse community with my unique perspective and experience. But for decades, female Reservists, especially those with dual-military spouses, have just been “making it work” without truly bringing to light the administrative, logistical and operational challenges we face. And because of that, we deserve a voice and an advocate to raise awareness and create policies that enable us to serve, support our spouses and raise a family.

Alison served as an active duty naval officer for almost five years before transitioning to Navy Reserves. Life is often hectic and frantic as she and her active duty naval officer husband balance their careers with raising two toddlers. When not chasing after one child or constantly feeding snacks to the other, Alison enjoys advocating for women serving in the Reserves who also face challenges as dual-military families. You can usually find her reading a good book, running on a Saturday morning or soaking up all the snuggles she can from her children.