Military Children And The Effects Of 14 Years Of War

For most of our daughter’s five-year life, it seems she has been saying goodbye. Three states in five years. Three... 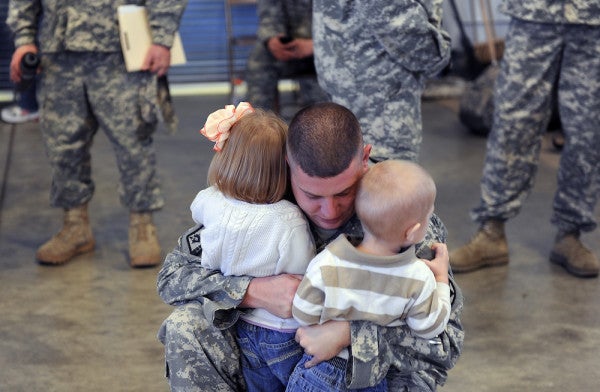 For most of our daughter’s five-year life, it seems she has been saying goodbye.

Three states in five years. Three deployments (Four, if you count that I found out I was pregnant with her a week into her father’s first deployment). I catch myself watching her, comparing her behavior to that of other kids because she wants so badly to be liked and to be the best at everything. Is she clingier than other little girls her age? Does she get attached too quickly or get her feelings hurt too easily when others don’t reciprocate? How much have her father’s absences played in her gravitating toward the male in the room? How much of her obsession to please everyone around her and make them happy has to do with having what essentially amounts to a single mother for a majority of her life?

Our son is in much the same boat. He was 8 weeks old when his father left for two months to attend a course in residence that he had already done by correspondence. Two states of residence and two six-month deployments later, our son is outgoing and playful at 3 years old, but if his father is gone longer than expected, or isn’t there when he wakes up in the mornings or from naps, he wanders the house, asking, “Where is my dad? Is he gone again? Did he leave us?” During this last deployment, his preschool teachers and I had to start monitoring him because not only was he grinding his teeth, but he started biting himself and his clothes.

Guilt comes easily to parents, but as a mother who started off as half of a military duo and then evolved into the stay-behind parent, guilt often became a near-constant companion. During these last three deployments, I would find myself lying awake at night, wondering about the decisions we made and the ripple effects they have and will have on our children. They didn’t sign up for this. They took no oath, they made no promises — and yet they live with the consequences of our choices. We chose to have each child; they weren’t unplanned or accidents, and yet at the time we made each choice, based on the information available, we had every reason to believe that the operational tempo was settling down and that we could have our chance at normal.

The research regarding post-9/11 military children covers a broad spectrum: It seems to either argue that military children are happily resilient or that they have higher rates of suicide attempts, lower academic rankings, and more behavioral issues. As a researcher, I can accept that all conclusions are possibly true, simply based on subgroups and sample sizes and variables not considered. As a parent, I only hope we can somehow overcome the influence on our family of repeated deployments that seem to have a larger impact on children under the age of 5, and that whatever damage might have been done hasn’t been too significant. Like many, I am waiting to see what the latest RAND study on how deployments affect military families says since it follows military families for three-year periods and covers all four Department of Defense branches.

In many ways, our family has been fortunate. During my husband’s third deployment, as I was doing a research project on military family resiliency, I ran across a study that linked the stress level of both parents with the psychological outcomes of the children. For his fourth deployment, I insisted on half-day preschool for both kids. While this will sound selfish to many, it was my lifeline — it was my opportunity to get a workout in every day and to get school work and household chores done, so that in the afternoons, my children could generally enjoy a much more relaxed mother. Additionally, having them at preschool gave me experienced childcare providers who could assist me in monitoring how the children were handling stress.

The kids and I pared our schedule to the bone, taking off most activities except for my daughter’s weekly ice-skating lessons and church on Sundays (Not only did this give me spiritual comfort, but it extended my support network, gave me time with other adults, and having a senior pastor who is a former British Navy chaplain certainly helped), leaving plenty of time for walks to the splash pad and visits with friends. One of my closest friends is not only a mother of seven — six of her children are boys, God bless her — but also holds a master’s degree in social work, so her assistance and insights were invaluable. It wasn’t always a perfect system and I realize that not every family is in the position to do what we did, but it functioned well enough for us in that most days were stress-free; however, I view the long-term results as still pending.

Our experience may or may not be typical or the definitive experience of military children in a post-9/11 era. There are pockets of the military that still do not experience the deployment tempo and the accompanying fatigue that has nagged at those in operational fields for the last decade plus (or more; some Air Force operational units have maintained a high tempo since the days of Elf One). Their children enjoy a much more stable home life and they view the military as a superb place to raise a family — and they are certainly entitled to their viewpoint.

There are families who seem to thrive on near-constant deployment cycles. And then there are families who view every April, when the Department of Defense celebrates the Month of The Military Child, as a bit of a slap in the face. For every heartwarming anecdote about a little one pausing to salute the flag, there is the painful knowledge that little ones are going to sleep with an absent parent yet again, and the question lingers of what long-term repercussions their families will face.

I asked a friend to write down her experiences. Her husband has deployed five consecutive holiday seasons of the last five years — and these are not “short” 90-day deployments. They have a 5-year-old and a 1-year-old. During his father’s fourth deployment, her then-4-year-old son became violent, lashing out not just at her, but at other children at his school, hitting, biting, and scratching. My friend took him to a counselor who bluntly told her that her family is considered “broken” and that his father’s extensive absences are to blame. She told me in an email:

Sometimes we end up crying together. Sometimes it all comes down to the same three words that are heartbreaking to hear from a little boy who should be happy, and know how to swim, camp, hike and tie his shoes by now. His sister, thankfully, is still living in baby oblivion, but he knows what time is all about now. He knows if I say that Daddy is gone, but only for a little while, that it’s a lie. He knows what “a little while” means compared to “a long while”, as we now measure deployments by days or Hershey Kisses or deployment chains made of colorful paper. He has a visual representation of how long Daddy is gone for this time—and when it damn near wraps around your entire ground floor, it’s overwhelming to a boy of five who is angry at his father for never being around.

“I miss Daddy.” Those three words melt my heart more than the words, “I love you.” They are the hardest words to hear, because other than, “I know, I miss him, too,” I’m not sure how to answer them anymore.

The research on what, exactly, to do to help military children learn resiliency is mixed, with many researchers openly confessing that either there isn’t enough data on military children, or that there isn’t enough strong scientific evidence that programs are working. This lack of strong scientific evidence is particularly crippling; without evidence that programs are working, it makes funding efforts more difficult, leaving military children and families essentially in limbo. Those families fortunate enough to build strong support networks — whether through extended family, friends, religious organizations and/or schools — will continue to do so, but those without the resources or knowledge will continue to falter, potentially putting an entire generation at risk. Until the data sets are there and policy is formulated, everything remains theory. In the meantime, families are left to simply continue doing what they have always done: survive the deployment while causing as little stress as possible for their deployed service member, and be there when they return.

One day, our children will ask why we each left active duty. We will tell them of how their mother tired of seeing people who had given everything to their service leave the military, only to find their families had grown so used to them being gone that they had simply moved on without them. We will tell them how their father began to worry whether the retirement he was working so hard toward would be even be there, so the constant sacrifice of family time seemed less worth it. Ultimately, we made a choice — perhaps not the choice others might make — but a choice that is probably going to be faced by other military families in the near future, especially if the DoD continues tinkering with military pay and benefits.

This should probably be where I would insert a heart-warming anecdote about how the kids — all kids, not just my kids, not just my friend’s kids — may be all right, after all. But the truth is that we just don’t know. No one knows. The one thing we do know is that deployments are hard on everyone, but the littlest, the most vulnerable among us, are the ones left paying the cost for commitments they didn’t agree to and wars they didn’t vote for.

As a nation, we are only beginning to realize the costs of being at sustained war for more than a decade. It is our children who may truly reap the consequences.