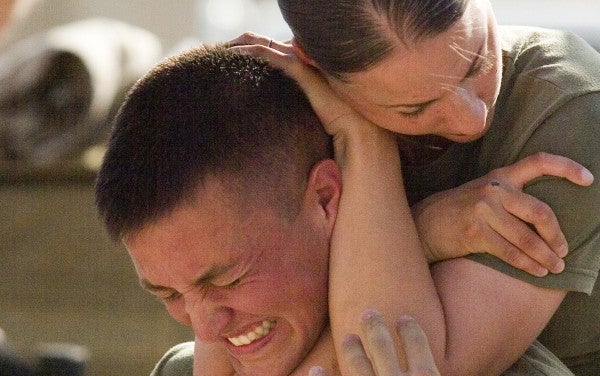 You should swallow your Lucky Charms before reading this stat: 1.9 million women are assaulted in the United States every year. That's why Tim Larkin, a member of the Black Belt Hall Of Fame and New York Times bestselling author of “Surviving The Unthinkable: A Total Guide To Women's Self-Protection,” is such a passionate advocate for teaching girls to kick the shit out of anyone who messes with them.

In Larkin's opinion, not equipping your daughter with self-defense skills is “like knowing she's going to be around bodies of water and not teaching her to swim.” But he knows plenty of parents need convincing, which is why he has the story of a former student in his back pocket at all times: a 105-pound girl he describes as “like the Reese Witherspoon character in Legally Blonde,” who hated the class and complained throughout. While she was in college a few years later, a serial rapist broke into her dorm room and her training kicked in. She let the 230-pound man get close enough to grab the back of his head, and with a solid yank, she thrust her thumb all the way to the back if his eye socket. Then she fell off her top bunk with the guy, landed on his neck, and crushed his windpipe.

Was she terrified? Of course. What she physically harmed? Nope.

This isn't just Larkin's business; as the father 2-year-old twin girls, he's given it plenty of thought. Here's his advice on how to raise ass-kicking girls.

Larkin's formal training for girls begins at 11 years old. Unfortunately, that's right about the time that many girls might wind up exposed to physical threats. There's only so much you can do with little kids, of course, but he doesn't shy away with rough physical play with his own daughters, and plans to introduce some basic self-defense moves around 8 or 9 years old.

If you're wondering if introducing “basic self-defense moves” means “sacrificing your own groin to get the point across,” the answer is yes.

2. Find the right kind of training.

Once your girl is old enough to start training, don't mess around with martial arts classes at the local Y. The majority of these are focused on competition, physical fitness, or meditative practices. That's fine for recreation, but you're looking for more practical applications of this stuff.

If Larkin's own Target Focus Training classes aren't held in your city, try something like Krav Maga, which was developed by the Israeli military to focus on real-world scenarios and efficient counterattacks.”When you're training women, make sure you're training them to injure,” Larkin says. Girls don't need to learn how to throw a punch; they need to disable rapists in five seconds and get the hell out of Dodge.

3. Find the right kind of trainer.

“The most important thing is to find an instructor that doesn't treat women differently than men, because that's ridiculous. You have to treat them the same,” Larkin says. “There are some great instructors that are out there, and there are some condescending instructors.” So weed out the Danny McBride types.

4. Have her train with men.

“You want her working against mostly male bodies because that's the threat,” Larkin says. This may feel awkward for tween girls, who are especially adept at feeling awkward even when not wrestling strangers in slow motion. Fortunately, the kinds of training and trainers that Larkin recommends often hold father-daughter classes, which are a great way for her to train less self-consciously and for you to beam with pride when she knocks you on your ass.

5. Have her train with weapons.

Larkin's not suggesting your daughter carry nunchucks in her purse, but he plans on familiarizing his own girls with various weapons for a simple reason: “If they have to face a situation like that, they're not going to freeze because of the unfamiliarity.”

Even if you have no intention of keeping weapons in your own home, you don't want your kid’s first interaction with a knife or a gun to be when someone's trying to wield it against her.

“A female is just as capable as a male in inflicting injury on the human body,” says Larkin. “In fact, I've found females to be far easier to train. We get caught up in all these ideas of 'Bigger, faster, stronger,'” but what really matters is sharper, quicker, and more prepared.

“If you're talking about a thumb to the eye, the person on the receiving end of that doesn't care if that's an XX or an XY chromosome behind that thumb; it's still going to have the effect,” he says.

This article, “A Self Defense Pro On Teaching Girls To Kick The Crap Out Of Attackers,” originally appeared on Fatherly.