A member of San Francisco’s board of supervisors is seeking to ban the Blue Angels from flying over the city,... 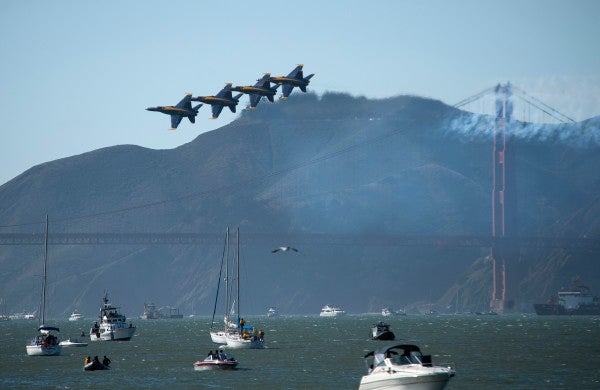 A member of San Francisco’s board of supervisors is seeking to ban the Blue Angels from flying over the city, less than a week after a Marine pilot, Capt. Jeff Kuss, died when his F/A-18 Hornet crashed during a Blue Angels rehearsal flight in Smyrna, Tennessee, on June 2.

The initiative was introduced by Supervisor John Avalos, a far-left progressive who represents District 11. It would ban the Blue Angels from flying over the city, limiting them to flying over San Francisco Bay, according to the San Francisco Chronicle.

RELATED: After tragic crash, Blue Angels return to Florida to grieve and regroup »

The Blue Angels were scheduled to perform at San Francisco during its annual Fleet Week Oct. 6-9, a tradition dating back decades. An estimated one million people come out to see the jets perform.

“It’s about them crashing and hitting a building — a place where people live,” Avalos told the San Francisco Chronicle. “It’s about the terror that they cause in people when they strafe neighborhoods. That’s something I hear about all the time when Blue Angels fly overhead.”

As Dan Lamothe at the Washington Post notes, “strafing” means to do a low pass with an aircraft while firing a weapon at a target, something the Blue Angels certainly do not do. Avalos either did not know the meaning of this word or intentionally sought to connote violent imagery.

Through his word choice, Avalos suggests there is more to the equation than the minimal risk of the aircraft crashing. Avalos appears to be using the Blue Angels as a thinly veiled critique of the military as a whole.

Additionally, a supervisor apparently agreeing with Avalos, Eric Mar, told the San Francisco Chronicle that the Blue Angels presence in the city, “goes against the values of peace that San Francisco stands for. … They promote militarism, and I don’t think a city like ours should be promoting that.”

These remarks from Mar and Avalos ignore San Francisco’s long close history with the U.S. military, one deeply tied to its identity and culture. San Francisco’s Fleet Week has persisted for 25 years, but for 2013 when it was canceled over the government shutdown. During World War II, San Francisco was the final port of embarkation for troops deploying to the Pacific Theater. San Francisco’s status as a Mecca for the LGBTQ community began after service members in World War II made it their home after being discharged. Even the LGBTQ community’s iconic symbol, the rainbow flag, was designed in the 1970s by a U.S. Army veteran.

Avalos does a disservice to San Francisco’s reputation as a city of tolerance by distastefully politicizing Kuss’ death and by disrespecting the service of millions. At last year’s Fleet Week in San Francisco, Avalos took to Twitter to dismiss the Blue Angels as “war planes” buzzing San Francisco with “feel good jingoism.” Whatever actual concern Avalos has over the safety of his constituents takes a back seat in his rhetoric to his own anti-military ideologies. Now, he’s using the tragic death of a U.S. Marine to promote those positions.

At best, Avalos’ initiative is a distasteful display of political opportunism over the death of a U.S. service member. At worst, it amounts to fear mongering and a shameful misuse of his stature as a public servant for the people of his community.

Before Kuss could even be buried, and a full five months before the Blue Angels were scheduled to appear in San Francisco, Avalos introduced his amendment, clearly trying to capitalize on the publicity created by Kuss’ death. His initiative does not seek to bar any other aerial demonstrations — including the Air Force’s similar squadron, the Thunderbirds — only the Blue Angels. Additionally, his initiative doesn’t address the military flights that occur regularly from the numerous military installations in the San Francisco area.

Avalos efforts are unlikely to be successful. In 2007, he was a legislative aide for then-supervisor Chris Daly, and authored a similar proposal banning the Blue Angels. That initiative failed to make it out of committee, according to the Chronicle.

The official website for San Francisco’s Fleet Week presently contains only a memoriam for Kuss.