Gen Welsh’s Love For Airmen Will Be His Lasting Legacy

August 2012, The Pentagon. I had just reported for duty on what would become my last assignment in uniform. Gen.... 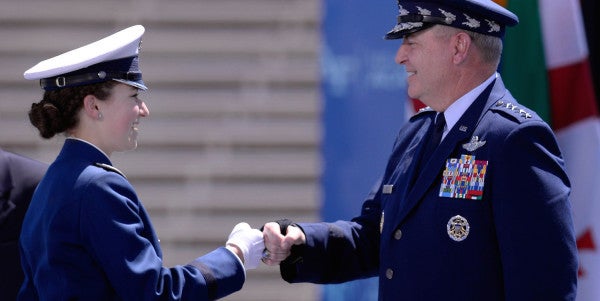 August 2012, The Pentagon. I had just reported for duty on what would become my last assignment in uniform. Gen. Mark Welsh had just taken over as Air Force chief of staff. Having recently served in Germany, I was very familiar with him; he was the commander of U.S. Air Forces in Europe for part of my tour there, and I’d heard him speak on numerous occasions.

On this day, I was showing my kids around the building — they were excited to see what the legendary Pentagon looked like inside. Walking them down the Air Force command section, Welsh’s executive officer was conversing in the doorway of the command suite. When he saw my kids, he asked if they wanted to come in and “see the chief’s office.” Their eyes got wide as we walked into the suite and were loaded up with all kinds of Air Force swag to take home.

Air Force Chief of Staff Gen. Mark A. Welsh III hosts Maj. Jack Nelson and his family prior to Nelson receiving the 2015 Koren Kolligian Jr. Trophy at the Pentagon in Washington, D.C., May 25, 2016.U.S. Air Force photo by Andy Morataya

The biggest thrill came when Welsh emerged from his office. My kids knew who he was and that he’d just taken over. He extended his hand to both and said, “Hi, I’m Mark.” He asked them about school, and what their favorite airplanes were. Then Welsh noticed my daughter’s new Air Force lanyard, and said, “Wow, I work here and even I don’t have one of those!” My daughter’s response? “Well, you can have mine if you want.”

Welsh served as chief of staff in arguably the most difficult and stressful budget environment in Air Force history, but one thing he always placed above all else was his love and respect for his airmen and their families. Many in similar leadership positions would have walked right past a couple kids and their dad to address bigger and more important things. Not Welsh. He truly loved his troops and their families, and would espouse it often and passionately when he spoke, evoking images of his own father who served before he did. His sentiment was palpable and real, and it’s a side that we frequently saw as airmen, but few outside the service really understood or appreciated if they ever noticed it at all.

Welsh had his share of headaches during his tenure. The insanity of a debilitating sequestration effort unfolded under his command, which devastated flying hour programs and weapons systems across the service. Welsh frequently testified on Capitol Hill how negatively the effort would impact the force — not just combat capability, but also people.

Never willing to compromise either, one of Welsh’s biggest gambles was advocating for the retirement of the fabled A-10 in favor of the F-35 joint strike fighter. This was significant, because the bristling Warthog weapons system was one of the first aircraft on which he trained and flew. Without a serious replacement aircraft to provide close air support, Welsh received vitriolic venom from many elected officials for the recommendation, not the least of whom was Sen. John McCain. But what might have looked like an ill-informed effort on the part of Welsh proved in reality to be a very effective play to keep the A-10 flying, especially in its successful combat against ISIS. He laid out options to Congress to reduce spending, and all were operationally debilitating. Retiring the fighter, in Welsh’s opinion, was the least painful of them. But many inside the Pentagon, confident Congress would probably never go for its retirement, saw it all as a play to keep the A-10 operational. Welsh’s effort to mothball it ultimately saved the legendary Warthog from extinction, and many believed it was an effective “deception” that worked. Congress directed the Air Force not to retire it, and the A-10 remains airborne today as a result of Welsh’s work.

Also under Welsh’s tenure, the F-35 Lightning II, the most expensive military weapons program in history, suffered delay after delay, and budget overruns that cost taxpayers millions. Granted the F-35 was bigger than the Air Force, with versions being acquired for the Navy and Marine Corps as well as foreign allies, Welsh still took heat over his staunch support of its further development. In 2012, the Government Accountability Office found that the F-35’s unit cost had nearly doubled, and the following year, C-Span reported a total program cost of $400 billion, twice the initial estimate. The cost of the F-35 helmet alone was a whopping $400,000 a copy.

In addition to cost issues, safety and functionality have also been highlighted as major program issues, some which seemed like no-brainers that should have been addressed in the design phase, such as the fuel system’s vulnerability to lightning strikes, which a paltry fire suppression system did little to address. Test pilots also reported the cockpit design was so poor that visibility to the rear suffered, and the result could be pilots “gunned every time.” In 2015, it was revealed that the F-35 was less maneuverable than 40-year-old F-16s with wing mounted tanks.

Despite these facts and many more that continue to plague the F-35 program today, Welsh continued to be a staunch supporter of the aircraft’s acquisition, and even called it the future backbone of the Air Force. Maybe. But with cost, safety, and operational effectiveness in serious question, the entire program remains in real jeopardy, and Welsh’s label of the F-35 as any future combat centerpiece (at least in the near term) is questionable at best.

Gen. Mark Welsh retired on June 24 after 40 years of service to the United States. What’s his legacy? Despite his plugging of the F-35 in the face of glaring problems, Welsh’s biggest legacy remains one of a man who has remained steadfast in his dedication to airmen, which was shown time and again through support and advocacy for them: Whether it was through the backing of personnel programs or maintaining of systems like the A-10 to ensure troops were able to get home safely from war.

Welsh served in incredibly difficult conditions under an administration that has regularly put the military on the back burner.