Commandant To Industry: You Need To Deliver Gear Faster And More Efficiently 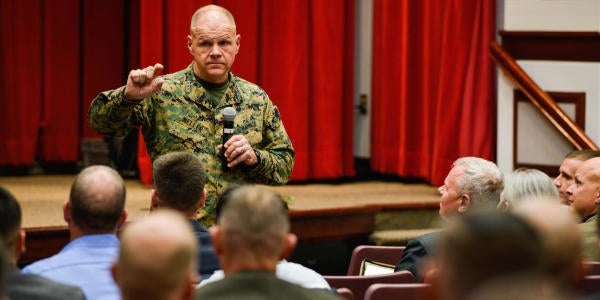 “There is the tension: How do you go faster in this world when you’ve got rules that are designed to allow everybody here to compete, and even if you don’t win the bid, you get to protest,” he said. “OK, I understand that; that’s business, that’s money, that’s what you need to do … But we’ve got an obligation to men and women in our service to give them new gear as soon as we can.”

Neller agreed with Chief of Naval Operations Adm. John Richardson, who faulted the military for “monstrous” lengthy requirements documents and red tape that slowed the acquisition process, to the chagrin of businesses. But he insisted that contractors bore responsibility to fulfill its end of the bargain as well.

“The other side of the coin, though, is, once we decide what we need to do and receive the product, it’s got to work,” he said. “And I’ve got to have parts.”

Neller didn’t mention any specific acquisition programs. But the F-35 Joint Strike Fighter, variants of which are being fielded by both the Marine Corps and the Navy, has been publicly cited for delays in reaching key milestones, and ongoing struggles to work out bugs in software.

And Marine officials have also spoken publicly about efforts to accelerate the process of getting spare parts for the F-35B, set to deploy to the Pacific in January.

Deputy assistant secretary of the Navy for Expeditionary Programs and Logistics Management Thomas Dee also recently testified before a Senate panel that award protests had delayed initial operational capability of the Joint Light Tactical Vehicle, a Humvee replacement for the Army and Marine Corps, by a year. Protests have also resulted in more minor delays for development of the Marines’ Amphibious Combat Vehicle 1.1.

Richardson and Neller concurred that military and industry were “too polite to each other,” failing to address major problems in their working relationship.

Another problem on the military side, Neller said, was an unwillingness to be flexible in accepting gear that meets most requirements, or adapting existing programs instead of holding out for a new solution complete and a new acquisition process. The testing and evaluation process was also needlessly unwieldy, he said.

“We don’t want anything we buy, if we put that investment in, it doesn’t work,” Neller said. At the same time, if it works in ten years, it may already become obsolete at that time.”

But these problems, he added, did not absolve industry of its responsibility.

“Fair enough, we’ve got some guilt and sin in this deal with requirements documents and the process, but once we start cutting steel and doing it, it’s got to work and we’ll have a conversation about that,” Neller said. “If we’re not happy, don’t worry about it, I’ll tell you. We’re in a partnership, so we need each other. But the stuff’s got to work, and it’s got to be on time, and the one thing we don’t have is a lot of time.”