Obama Warns Against Privatizing The VA

As efforts to reform the Department of Veterans Affairs continue, there’s an ongoing debate about the best way to fix... 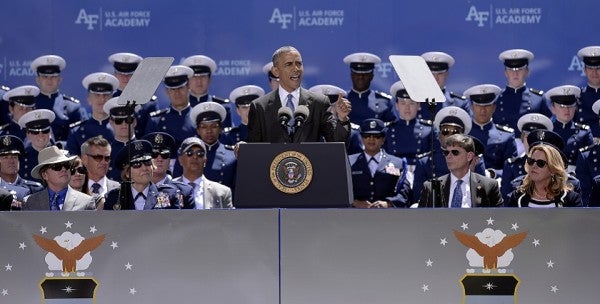 As efforts to reform the Department of Veterans Affairs continue, there’s an ongoing debate about the best way to fix a system mired in bureaucracy and haunted by past scandal. While some argue in favor of VA privatization, either in part or in full, others and most recently, the president, are in favor of continued VA reform.

“The notion of dismantling the VA system would be a mistake,” said President Barack Obama during a June 2 exclusive interview with The Colorado Springs Gazette. “If you look at, for example, VA health care, there have been challenges getting people into the system. Once they are in, they are extremely satisfied and the quality of care is very high.”

The president said attempts to privatize the VA would delay the progress his administration has made toward modernizing the department.

“It's a big ocean liner, and on any given day, given how far-flung the agency is, we're still seeing problems crop up that we have to correct,” said Obama, who spoke to The Gazette’s Megan Schrader while visiting the Air Force Academy in Colorado where the president delivered the commencement speech. “I think the main message is that we've still got a lot of work to do. It's an all-hands-on-deck process.”

Related: Should The Government Privatize The VA? »

Currently, the VA does allow for some private care, though it’s limited to specific situations due to the Veterans Access, Choice And Accountability Act, which Obama signed into law in 2014. The bill created the Choice Program which required the VA to contract with private providers if veterans lived more than 40 miles from a VA clinic or had waited longer than 30 days for an appointment. However, the initial launch of the Choice Program was fraught with confusion, with both patients and care providers unclear on the requirements for eligibility.

The subject of whether — and to what extent — veterans are able to obtain health care from private industries has been the subject of contentious partisan debate. Sen. John McCain of Arizona has proposed a new plan that makes the Choice Card universal and permanent, which would allow all disabled veterans to receive care from community doctors, regardless of distance or wait time.

Alternatively, others, including Democratic Sen. Jon Tester of Montana who would rather see VA policy and plans further reformed instead of repealed or replaced by private care.

In May, the Veterans First Act was passed allowing for greater latitude in dealing with bad actors, and safeguards for whistleblowers within the VA, as well as provisions designed to provide patients with greater flexibility.

“The mission for the VA is clear: Make sure veterans can get the care they need in a timely manner,” Tester wrote in an op-ed for Task & Purpose. Tester helped write part of the bill. “With the Veterans First Act, I believe we give the VA the tools it needs to succeed and Congress the tools it needs to ensure the VA keeps its promises.”