Editor's Note: This article was updated from its original form on Wednesday at 6:18 pm to reflect the Senate vote... 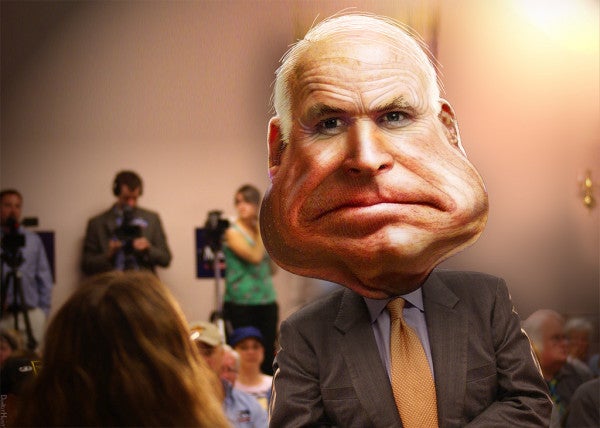 Editor's Note: This article was updated from its original form on Wednesday at 6:18 pm to reflect the Senate vote passing new VA reforms.

The recent firestorm ignited by revelations of systemic corruption throughout at least 69 Veterans Affairs hospitals has led to a flurry of congressional panels condemning the VA’s broken management culture and its seemingly endless stream of scandals. The outrage has been distinctly bipartisan, and contrasts with the sharply drawn political lines over the Benghazi and IRS scandals and virtually every other issue in Washington these days. But for all the protestations that veterans are a priority, some lawmakers cannot help but lard VA reform bills with amendments on other political issues that virtually guarantee their failure.

In February, Congress failed to pass a sweeping VA reform bill over Senate Minority Leader Mitch McConnell’s insistence that an amendment be added on Iran sanctions, something neither side agrees on. Senate Majority Leader Harry Reid promptly blocked the amendment.

Furthermore, Senate Republicans could not agree to waive VA spending limits to accommodate the bill’s price tag, estimated to cost $21 billion over 10 years.

That failure was a perfect example of why Congress can’t work together. Despite having the same stated goals, and a bipartisan willingness to sign any budget the VA asks for, when it comes down to the wire, petty disagreements and totally unrelated amendments become poison pills for veterans.

“Republicans blame Democrats. Democrats blame Republicans. And veterans are caught in the crossfire,” said Paul Rieckhoff, founder of Iraq and Afghanistan Veterans of America. “Veterans don’t have time for this nonsense.”

“We would oppose non-germane amendments like Iran, but this partisanship and gamesmanship has got to stop so that American people can get the laws back that we need to help veterans,” said Louis Celli, a legislative director with The American Legion.

This time, the unlikely duo of Sen. Bernie Sanders and McCain came up with the new bill, which expands even further on the old. Along with elements from the February bill, such as authorizing the construction of 26 new VA hospitals, it greatly expedites disciplinary and firing proceedings, provides hundreds of millions for hiring new medical staff, and authorizes private care when local VA facilities are overwhelmed. The bill also includes new provisions concerning care for military sexual assault victims who enter the VA system.

Late Wednesday, the Senate voted 93-3 to pass the Sanders-McCain VA reform bill. “This bill is a beginning – not an end – to the efforts that must be taken to address this crisis. Still, the bill includes some of the most significant changes to the VA in decades,” Sen. John McCain said after the vote. “This bill is a compromise, so none of us got everything we wanted. However, the Veterans’ Access to Care through Choice, Accountability, and Transparency Act is a significant step forward to dealing the with crisis at the VA and immediately helping our veterans in Arizona and across America.”

McCain conceded there might be one other procedural hurdle for the VA measure, since it would open the floodgates of federal funding to address the claims backlog highlighted by the existence of secret waiting lists. The bill would not only authorize but also appropriate funds through fiscal 2016.

Congress may be in a period of epic dysfunction, but a key point of cooperation has been trying to do the right thing for veterans. That is, until a chance to play politics presents itself. Then it returns to the gridlock that leaves most Americans, and especially veterans, with such a low opinion of Congress. That these reforms have almost universal support, but previously have been blocked by partisan politics, is adding insult to real injury.

Fueled by the tragedies wrought by an agency eternally playing whack-a-mole with indifference, incompetence, and notoriously bad management, Congress has a historic chance to institute reforms in a health care system considered impervious to reform. That is, unless politicians continue their record of never missing an opportunity to miss an opportunity.

Stephen Carlson served two tours as an infantryman with the 10th Mountain Division. He lives in Washington D.C.