VA Secretary Nominee Tells Senate He Can Make A Difference

Robert McDonald, the nominee for Veterans Affairs Secretary, sat for hours of Senate questioning at his confirmation hearing, but if... 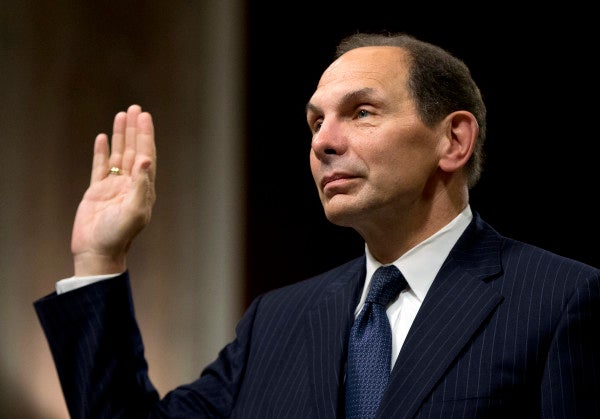 Robert McDonald, the nominee for Veterans Affairs Secretary, sat for hours of Senate questioning at his confirmation hearing, but if you want to know what he is going to do to fix the VA, you will have to wait.

“For me, taking care of veterans is personal. I come from and care deeply for military families,” McDonald told the Senate Veterans' Affairs Committee on Tuesday. We have heard that before. But, it is not enough to care, you have to be able to tackle huge and systemic problems.

McDonald might have shown great success in the private sector, and his tenure as CEO of one the world’s largest and most respected company’s shows he knows how to manage. But selling toothbrushes and laundry detergent, albeit in over 180 countries, is a far cry from a gigantic federal agency notorious for its systemic dysfunction.

McDonald’s record is undoubtedly impressive. He graduated from West Point in the top 2% of his class, and spent five years of active duty as an infantry officer with the 82nd Airborne. After leaving the Army, he secured an entry-level marketing job with Procter & Gamble in 1980, and after rising through the corporate ranks, culminated a 33-year tenure with the company as CEO.

Some have wondered why a man who made $16 million in 2013 during his final year with P> would be interested in what may be the most thankless job in the federal government.

Even a top-flight CEO could be bewildered by a department with a budget of $163.9 billion and over 300,000 employees, let alone one riddled with scandal.

What followed was a litany of ills affecting the VA, from fraudulent wait times, stories of retaliation against whistleblowers, and a VA claims system with official numbers that look anything but accurate. McDonald had few concrete answers, but he had little doubt that fundamental problems exist.

“The department’s problems with access, transparency, accountability and integrity have been well documented,” he said. “There is a lot of work to do to transform the department and it will not be easy, but it is essential and can be achieved.”

McDonald’s answer to provider shortages was better recruiting and making better use of outside talent to relieve appointment backlogs. “Two-thirds of health care professionals in the U.S. have at least trained with the VA, if not actively involved today. That would be something we want to look at.”

He emphasized that the Defense Department and VA need to “remove the barrier” between their healthcare systems. “I had a meeting with Secretary of Defense Hagel. We both agreed that it is not the veterans’ fault that there is a seam between the DoD and the VA.”

The chronic lack of communication between the two agencies has been a common complaint, with veterans who were receiving treatment while on active duty having to start from scratch once they transitioned out of the service and into the care of the VA.

The Senate hearing was almost uniformly positive for McDonald, the questions and answers mostly pro forma. The acceptance that Robert McDonald is as qualified as anyone to whip a large, troubled organization into shape seemed universal.

“What we will try to do is have a vote on your confirmation tomorrow, and I believe based on what I heard that you will be confirmed, and I hope that is the case,” Sanders said as the hearings closed.

The job is as good as McDonald’s, and a formidable job it is. A still fresh scandal, a notorious bureaucracy, and a divided Congress await him. Godspeed, Mr. Secretary.