On Thursday, in a short ceremony at Fort Belvoir, Virginia, before a crowd of soldiers and surrounded by key members... 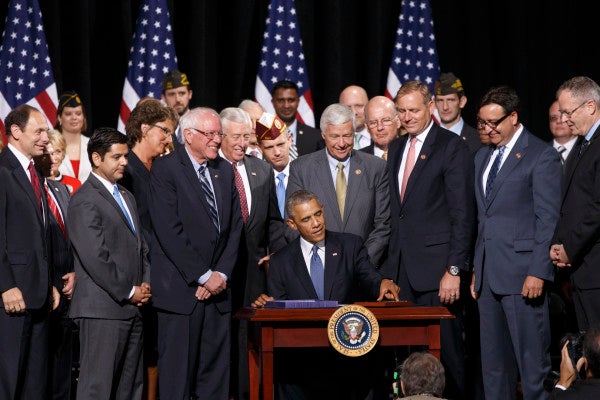 On Thursday, in a short ceremony at Fort Belvoir, Virginia, before a crowd of soldiers and surrounded by key members of Congress, President Barack Obama signed the Veterans' Access to Care through Choice, Accountability and Transparency Act of 2014. This follows months of wrangling in Congress over desperately needed reforms in the face of the Department of Veterans Affairs scandal.

“We’ve already taken the first steps to change the way the VA does business,” the president said. “We’ll take another step forward when I sign into law the VA reform bill that was passed overwhelmingly, with bipartisan majorities — and that doesn’t happen often in Congress.”

The 50-page bill — the result of a last-minute compromise brokered between Sen. Bernie Sanders of Vermont and Rep. Jeff Miller of Florida, both chairs of their respective veterans committees — will inject over $16 billion into the VA system, $5 billion of which will go toward the immediate hiring of new medical staff.

Sanders was in attendance at the signing. Miller, who is visiting VA hospitals in Texas, released a statement saying, “I am pleased President Obama has finally recognized what we have been telling administration officials for years: that VA’s widespread and systemic lack of accountability is jeopardizing the health of veterans and contributing to all of the department’s most pressing problems.”

Ten billion dollars of the new funds will go toward providing access to doctors outside the system if veterans have to wait more than 30 days for an appointment, or if they live more than 40 miles from a VA facility. The bill also seeks to improve access to mobile VA clinics.

It would also require the VA secretary to provide a publicly accessible database showing the wait times for medical care at every VA facility within the next 90 days.

But what may be the most important element of the bill is the expanded powers the recently confirmed VA Secretary Robert McDonald has acquired to fire senior VA executives. In the past, appeals with pay could drag on months or even years. Now the suspensions can be executed immediately and without pay, while an appeal against termination can take no longer than 21 days.

“Over the last few months, we’ve discovered some inexcusable misconduct at some VA health care facilities — stories of our veterans denied the care they needed, long wait times being covered up, cooking the books. This is wrong. It was outrageous,” Obama said.

“The good news is, we’ve cut the disability claims backlog by more than half. But let’s now eliminate the backlog. Let’s get rid of it.”

The VA has claimed that it cut the backlog of claims older than 125 days by 55%, leaving 275,000 pending. Undersecretary for Benefits Allison Hickey stated on July 14 that the VA was on track to process 1.3 million claims this fiscal year, and the backlog should be eliminated in 2015.

But that same day, a hearing by the House Committee on Veterans’ Affairs received testimony that this goal was met at the expense of newer claims and appeals. The VA’s Office of the Inspector General reported that in the Baltimore VA facility alone, more than 8,000 benefits claims had been hidden in order to make the backlog look smaller.

“Whatever win you attempt to take credit for in 2015, you will not be celebrated,” Miller said at the hearing.

At Thursday’s signing ceremony, the president made clear that this is only the start to reforming an agency renowned for its imperviousness to change. In a swipe at Senate Republicans, Obama said, “Congress needs to do more, also. I urge the Senate, once again, to finally confirm my nominee for Assistant Secretary for Policy at the VA, Linda Schwartz; my nominee to lead the Board of Veterans Appeals, Constance Tobias; my nominee for CFO, Helen Tierney. Each of them have been waiting for months for a yes-or-no vote.”