So Far, The Big VA Reforms Have A Failing Grade

Secretary of Veterans Affairs Bob McDonald was sworn into office in July inheriting an avalanche of problems and scandal that... 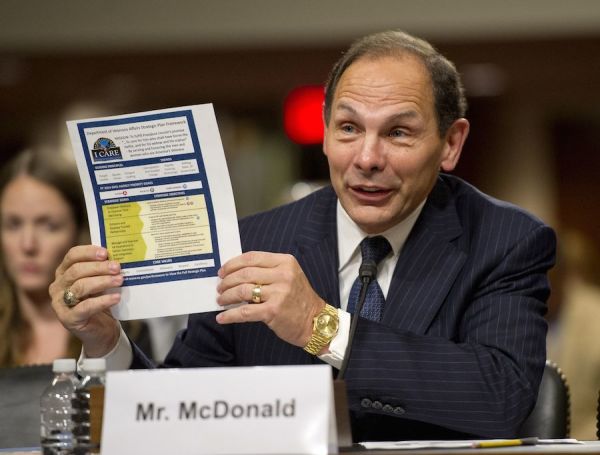 Secretary of Veterans Affairs Bob McDonald was sworn into office in July inheriting an avalanche of problems and scandal that forced his predecessor, Eric Shinseki, to resign.

On Sept. 8, McDonald rolled out the Road to Veterans Day initiative, which outlined his three core strategies for fixing the VA. These included rebuilding trust, improving delivery of services, and initiating long-term reforms. In the week leading up to Veterans Day, McDonald went on a media blitz, giving a speech at the National Press Club and appearing on 60 Minutes, along with other cable outlets.

McDonald claimed to be doing everything he can to live up to his promises. “I am personally convinced that this job can be done, that these reforms can be executed, that we can care for the veterans the way we should be caring for them,” he told the National Press Club.

While McDonald might get an A for effort, we’ve drummed up a report card assessing his ability so far to implement his objectives.

Rebuild trust with veterans and the public

The VA’s reputation and credibility, which was already less than stellar among many veterans, took a massive hit from the scandals this year, in addition to older problems such as disability claims backlogs. McDonald has said that rebuilding that trust was his highest priority.

A key part of this effort is the identification and firing of the employees and executives who were complicit in fraudulent wait lists, whitewashed performance reviews, and other dirty tricks that came to light over the last year. For many, that process has dragged out far too long.

House Veterans Affairs Committee Chairman Rep. Jeff Miller in particular has been critical, pointing out that the director of the Phoenix VA is still suspended with pay despite overseeing one of the most dysfunctional VA facilities in the country. “If VA has the evidence needed to fire Sharon Helman, which it says it does, it should fire her,” Miller said in a statement.

But according to both McDonald and Deputy Secretary Sloan Gibson, even with expedited appeal procedures, they still have to take into account due process that is grounded in existing case law. The Merit Systems Protection Board, which handles the appeals, requires a high standard of evidence.

“It's important to understand what the new law does do and what it does not do,” Gibson testified to the House Veteran’s Affairs Committee on Thursday. “The law does not give VA leaders the authority to remove senior executives at will. Any removal must still meet stringent evidentiary standards and provide due process,” Gibson said.

So far, only four senior executives have been let go, with two of them allowed to retire, a move that has also raised criticism. Under current law, federal pension benefits are sacrosanct except in extreme cases such as treason or terrorism.

It is clear that although a large number of employees and many executives have been identified as a problem, the reforms put in place to shorten the appeals process did not address the main roadblock: the process itself. This issue is hardly restricted to the VA, considering in some federal departments where employees are more likely to die than lose their jobs. With the law and precedent involved, swift justice might be too much to hope for.

If there has been an ongoing trend through the VA’s troubles over the past few years, it is wait times, from pending disability claims to incredibly long wait times for specialty care.

Under McDonald, the VA has had a fair amount of success improve wait times, considering the size of the agency and the sheer number of people it has to serve. The department has ramped up its scheduling process and is utilizing far more outside care to cut down on wait times.

“Wait times are decreasing. VA has scheduled more than 1.2 million more appointments in the past four months than in the same period last year,” McDonald said at the National Press Club.

Outsourcing to private medical providers is playing a significant role in tackling the immediate backlog. The VA spent $4.8 billion for non-VA care last year, but that figure has been increased by $10 billion included in the reform bill passed earlier this year.

A new program launched earlier than month that issues choice cards to veterans more than 40 miles from a VA facility or who have been waiting for appointments longer than 30 days, allowing them access to private care.

McDonald also pointed to the perennially backlogged disability claims system, which surged to a high of 900,000 claims in March 2013, with over 600,000 pending past 125 days. This backlog has been greatly reduced over the last 18 months.

“We've reduced the claims backlog by 60%, which is really significant progress. I think it's frankly one of the most profound transformations of government business that I've seen in my career,” he said.

But there is still a great deal to be done. More than 600,000 veterans are waiting month or more to get an appointment, and 23,000 of them have been waiting four months or more for specialty care. The VA is making progress on the issue, and the results have been good for such a vast and plodding bureaucracy known for resistance to change. For hundreds of thousands still waiting for care, however, the change could not come fast enough.

McDonald’s first few months in office have been spent mostly putting out fires and fixing immediate problems, but it is the long game that will really matter to people who may use the system their entire lives. How that process will play out is still to be determined.

Much of the VA’s problems stem from the chronic shortage of medical personnel at many of its facilities, and McDonald has made it clear that he is focusing heavily on recruitment. He plans on hiring 28,000 additional medical workers, and has been visiting medical schools across the country to spread the word.

It is hoped that incentives such as student loan forgiveness and competitive salaries will help overcome the misgivings of medical workers who might have second thoughts about working for an agency that has been the object of so much scandal and dysfunction. McDonald has approved raises as high as $35,000 dollars for some medical specialties.

By next year, the 12 different websites veterans currently use to access information and benefits will be consolidated into one, and the 23 medical regions and nine different organizational structures are going to be revamped. A chief customer service officer that reports directly to McDonald will also be appointed.

In a memo announcing the structural changes to VA employees, McDonald cautioned that the process is going to be a long one. “Please keep in mind this is a long-term process and we are just beginning to plan how all this will all unfold.” He urged employees to be open with their thoughts, with a new website being opened for submission of ideas.

The VA is a giant agency, with over 340,000 employees and a requested 2015 budget of over $163 billion. Any change to an organization that large is going to be slow by nature, as federal bureaucracy is not known for being light on its feet. It will be years before many of the long-term changes can come into effect, so for now, it’s a waiting game.