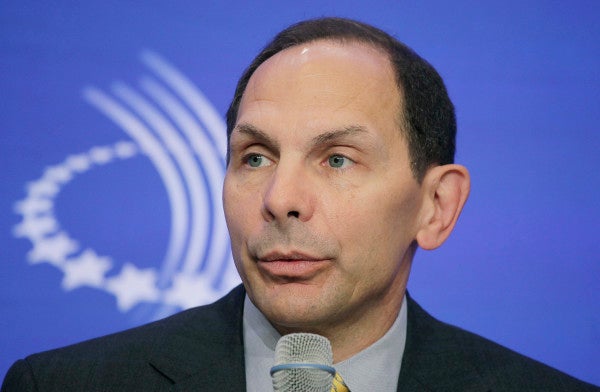 In a pick that surprised much of Washington last month, President Barack Obama tapped former Procter & Gamble executive Robert McDonald to lead the Department of Veterans Affairs, which is reeling from a series of scandals over the last few months. On Tuesday, in a vote that comes just days before Congress's five-week recess, the Senate confirmed McDonald as the new secretary with a unanimous 97-0 vote.

His selection indicates a shift away from the trend of selecting career military officers for the post, in the hope that his long history of corporate managerial skills will be enough to stem the bleeding, and bring systemic change to an organization notorious for its resistance to it.

McDonald’s task will not be easy. The VA has long been plagued with administrative problems and bureaucratic backlogs, but recent revelations over veterans’ deaths while languishing on secret wait lists, and reports from whistleblowers over endemic incompetence and corruption, have led to a national uproar. His predecessor Eric Shinseki, long a respected leader, resigned a month ago today.

McDonald was born in Gary, Indiana, and raised in the Chicago area, the son of an Army Air Corps veteran of World War II. He graduated from West Point in 1975 in the top 2% of his class with a bachelor of science in engineering. From there, he went on to serve as an infantry officer with the 82nd Airborne Division.

During his five years in the Army, McDonald was clearly interested in more than simply serving out his time. He completed the Airborne, Ranger, Jungle Warfare, Northern Warfare, and Jumpmaster schools. He also obtained an MBA from the University of Utah in 1978.

On his decision to leave the Army, McDonald later said, “I loved the Army. I loved what I was doing. I met my wife and I felt a conflict because, if I want to be in the Army, then I want to be in a Ranger unit, I wanted to be in an airborne unit. That meant I was going to be gone all the time. It became a question of the tradeoff, the sacrifice involved.”

He went on to describe the great value of a military career. “When your life’s in danger — whether it’s war or peace — where you’re jumping out of an airplane with a parachute, it makes anxiety real. So as you remember those situations, future situations may become less anxiety-ridden. And you learn to depend upon the people around you. You learn to love the people you work with.”

After leaving the Army, McDonald joined Procter & Gamble in 1980 as an entry-level brand assistant. This led to a 33-year career with the company, working on P>’s prominent laundry brands in Asia and Europe. After 15 years working overseas, he returned to the United States and eventually became CEO of P> in 2009.

During his tenure as CEO, there was a great deal of controversy among investors over the company’s loss of market share to competitors and the fact that McDonald sat on the boards of so many outside companies. He abruptly resigned in 2013, being replaced by the man he had previously succeeded.

He continues to serve on the boards of directors of Xerox Corp. and U.S. Steel. He has previously served as an appointee by presidents George W. Bush and Obama on trade advisory committees.

But before McDonald can give much thought to firing, he first has to deal with a lot of hiring in his senior staff. Five of his future assistant secretary posts are held by interim replacements after several resignations in light of the scandal. Several potential replacements, such as Linda Schwartz and Helen Tierney, have both been waiting nearly a year for their nominations to be confirmed.

Bob McDonald is undoubtedly a man with a great deal of experience in managing a large, scattered multinational corporation, but whether he is capable of facing an entrenched culture of corruption and ineptitude at the VA, and a notoriously recalcitrant Senate, is a different matter entirely. McDonald is about to a get a first-hand lesson in the stark differences between profit-driven business and a government agency caught in a political maelstrom.