Democratic U.S. Sen. John Walsh of Montana, a retired brigadier general and adjutant general of the National Guard, and the... 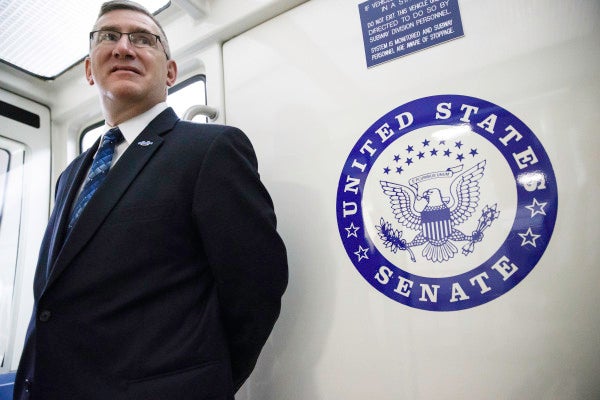 Democratic U.S. Sen. John Walsh of Montana, a retired brigadier general and adjutant general of the National Guard, and the first veteran from the Iraq war to serve in the United States Senate, is currently under investigation by the Department of Defense for plagiarizing the final paper of his master’s degree at the Army War College.

The conclusions at the end of his paper “The Case for Democracy as a Long Term National Strategy” was taken virtually verbatim from a document on the same topic from the Carnegie Endowment for International Peace. Several other passages were improperly cited, according to a comprehensive report from the New York Times.

The War College will hold an academic review panel no earlier than August 15 and, if found guilty, Walsh could have his degree rescinded. This decision would be forwarded to the DoD Inspector General, where further action could be taken.

Walsh was appointed to the senate to fill the vacancy of longtime Montana Democrat Max Baucus, who now serves as the U.S. Ambassador to China. His appointment was viewed This is embarrassment enough, considering it has happened during an election year where he is trailing his Republican opponent by more than 10 points in recent polls. But the official response from the Walsh camp has only succeeded in compounding the issue.

After Walsh initially denied that the plagiarism was intentional, his campaign said it was a simple mistake. “At the time, Sen. Walsh was prescribed medication used to treat PTSD. This does not excuse the mistake, but provides important context for the circumstances which the Senator was working in,” his campaign staff told Politico on July 24, the day after the story broke.

“He had persistent nightmares, deep anxiety and problems sleeping. The same month that this was due, a soldier he led into combat in Iraq committed suicide,” his aides said.

Walsh had been prescribed Paxil, which is a standard antidepressant often used for treating PTSD.

In a fact sheet released to the press, Walsh’s campaign team also claimed that “While commanding the 1-163rd Infantry Battalion in Iraq in 2004 and 2005, Walsh survived hundreds of IED explosions while in a Humvee, and he was targeted – by name – by al-Qaeda in Iraq, and his unit endured hundreds of rocket attacks.”

If that sounds ridiculous, it is. His campaign team later followed up by saying Walsh survived one IED explosion in October 2005, while claiming it was referring to his unit as a whole.

Walsh commanded the 1st Battalion of the 163rd Infantry Regiment of the Montana National Guard in Iraq from 2004 to 2005. The paper was submitted in 2007.

Over the past week, Walsh has been keeping a low profile concerning the scandal. He was scheduled to speak on a suicide prevention panel at a Defense One/IAVA veterans conference in Washington on Wednesday, but claimed Senate votes created a conflict in scheduling and he gave a short speech instead.

Appearing nervous and awkward, he delivered a rambling 13-minute statement concerning veteran suicide, citing his service as a battalion commander in Hawija, a notorious hotspot near Kirkuk. To make matters worse, when talking about the trauma that soldiers face, even ones that never left the base, he made a bizarre comment concerning women in the military.

“I have really had a big concern for our men and women in the medical field. Because every time these men and women, I really had a concern for the women, I don’t know why, but I was really concerned for our young women. They were in our medical career fields, they were in our medical tent, and they would see these injuries come in on a daily basis.“

In light of hundreds of thousands of female veterans deployed to two wars over the last 12 years, this is a remarkably ignorant statement. Women have been treating American soldiers in combat for the better part of a century. Despite whatever patronistic impulses some might feel over women, the reality is that they are already in combat, and they are not likely to stop, given the modern realities of war.

And Walsh’s use of PTSD as an excuse for plagiarism has raised some eyebrows in the veterans community. Alex Horton, a former Army infantryman who served in Iraq, wrote in the Washington Post, “As a retired general officer, Walsh is the sole Iraq veteran in the Senate. He has set a standard for others to follow, and without swift condemnation across the veteran community, Walsh’s behavior signals to veterans that professional and personal accountability can be suspended at will … PTSD causes certain behaviors, but ethical violations are not one of them.”

More concerning, at least from a political campaign standpoint, is that many veterans from his home state of Montana are less than impressed when it comes to his reasons for plagiarism.

Rick Gale, a Vietnam veteran who lives in Bozeman, who also has a son wounded in Iraq, said much the same. “He will have to work hard to restore the public’s trust during the days and weeks ahead. Hopefully, Montanans will look at his entire record of service to this country before giving up on him.”

Veterans compose 11.4% of Montana’s voting age population, which could be crucial in a race as tight as the one Walsh is facing. Walsh’s military service has been one of his key selling points.

But the reference to the suicide of a former subordinate may be the most surreal excuse of all. Walsh has spoken passionately about veterans’ suicide in the past, and he recently introduced a bill in the Senate to help prevent veteran suicide, so it makes it all the more strange that he would use a suicide from his old command as an excuse for plagiarism. According to a recent IAVA survey, 40% of all Iraq and Afghanistan veteran’s know at least one person who has committed suicide.

There is no evidence that 40% of those veterans cheated in school.