Hemingway posing for a dust jacket photo by Lloyd Arnold for the first edition of “For Whom the Bell Tolls”,... 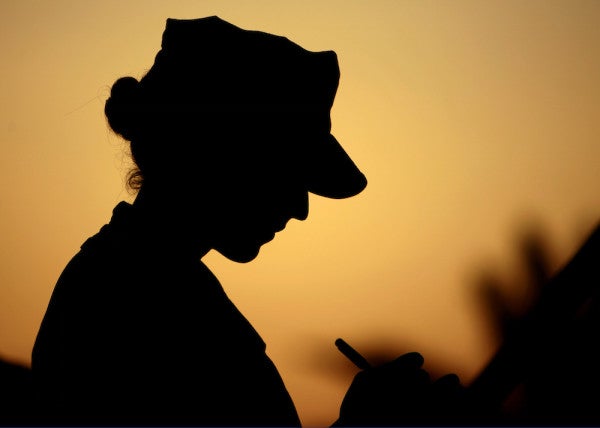 Hemingway posing for a dust jacket photo by Lloyd Arnold for the first edition of “For Whom the Bell Tolls”, at the Sun Valley Lodge, Idaho, late 1939.

A short story by Ernest Hemingway from his 1925 anthology titled “In Our Time,” could very well have been written in our time, even though the author wrote it 90 years ago. The title of the story was “Soldier's Home.”

When Hemingway wrote “A Soldier's Home,” he was in his mid twenties, and recently returned from the first of several wars he survived before taking his own life. He first served in World War I on the Italian front, where he volunteered as an ambulance driver, and was wounded. Of all the reviews and critiques of Hemingway and his alcohol intake and suicidal heritage, I have yet to see one that examines whether his combat time accounted for potential post-traumatic stress. He may well have suffered bouts of PTSD in silence, as so many vets of earlier wars did. That said, Hemingway certainly was familiar with the concept as a working writer. This nearly century-old story offers key insights into what our own servicemen and women experience when they return home, many of them finding that they have not come home at all.

Harold Krebs, the soldier in Hemingway's story, fought at Belleau Wood, Soissons, and the Meuse-Argonne; names synonymous with the savagery of infantry combat where men were cut down in the woods and wheat fields with machine guns and rapid-firing artillery. They were mutilated and burned, and sometimes felled by poison gas, one of the Great War's contributions to what we now call weapons of mass destruction.

In the story, Krebs has returned home to his Midwest town, but cannot get interested in human contact, with the pretty girls walking past, with his father who earns a living in real estate, with his mother who wishes he would find a job, and gives him reluctant permission to use the family car as if he were still in high school. When mother Krebs asks her son if he loves her, he answers, “No,” meaning that he cannot feel emotion toward anyone anymore. She is shattered. Below is a passage from the story:

His mother looked at him across the table. Her eyes were shiny. She started crying.

“I don't love anybody,” Krebs said.

It wasn't any good. He couldn't tell her, he couldn't make her see it. It was silly to have said it. He had only hurt her. He went over and took hold of her arm. She was crying with her head in her hands.

His mother went on crying. Krebs put his arm on her shoulder.

“Can't you believe me, mother?”

“All right,” his mother said chokily. She looked up at him. “I believe you, Harold.”

Krebs kissed her hair. She put her face up to him.

“I'm your mother,” she said. “I held you next to my heart when you were a tiny baby.”

“Would you kneel and pray with me, Harold?” his mother asked.

They knelt down beside the dining-room table and Krebs's mother prayed.

So his mother prayed for him and then they stood up and Krebs kissed his mother and went out of the house.

This story written 90 years ago speaks to hundreds of thousands of American families as if it were written today. It conveys the mystification and disconnection between family members who cannot understand how the wars we send them to fight have changed their sons, or daughters. And they cannot understand how the experience of the wars have altered, or even ruptured, their family bonds forever.

Many of us would go to our knees and pray for a returned veteran like Harold Krebs of Hemingway’s story, or Clay Hunt of recent real life, and tragic death. But beyond prayer, we must quickly respond with more effective mental health resources, and actively assist our returning sons and daughters, husbands and wives, who have served and sacrificed, to change the narrative that was defined the veteran’s war story for so long.