It's silly to assume that everyone who serves on the line is cut from the same cloth. 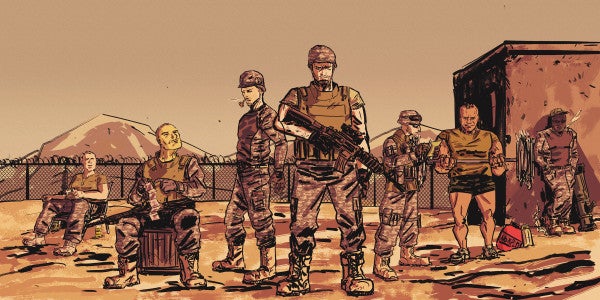 Most civilians picture the infantry as a bunch of dog-faced meatheads who love breaking shit and shooting guns. But does every college kid in America listen to Tame Impala and play ultimate frisbee? Of course not. So it's just as silly to assume that everyone who serves on the line is cut from the same cloth. From the left-leaning idealist who dreams of writing the next great war novel to the patriotic computer nerd, here's an illustrated guide to the modern infantry platoon.

If this guy had a coat of arms, it would be an image of piss bottles and filthy socks. His barracks room is a hellish labyrinth of soiled clothing, moldy ramen bowls, and empty cans of Mountain Dew, which he calls “gamer fuel.” His breath smells like a rodent crawled down his throat and died there. The only thing worse than the stench that trails Stinky wherever he goes is his PT score — the lowest in the platoon.

This guy usually grew up in either Ohio or Michigan. He learned how to shoot a rifle before he learned how to wipe his own ass, and he knows how to do things like skin squirrels and tie butterfly knots. His father fought in Vietnam; his grandfather stormed the beaches of Normandy; and his great grandfather practically defeated the Ottoman Empire single-handedly in World War I with a cutlass. At night, when everyone is asleep, he sneaks off to the latrine to stare at pictures of his F-250, which has a name. It's Mary Beth.

Neither a patriot nor a fighter, this guy joined the infantry because he read “A Farewell to Arms.” As the only liberal in the platoon, he can often be found smoking his pipe and talking about podcasts to no one who cares. The peace sign on his helmet is not intended as an anti-war symbol, but rather a signal to the world that, yes, he's seen and appreciates Stanley Kubrick's “Full Metal Jacket” (“but the book is better”).

Fallujah, Sadr City, the Korengal — this guy's been to them all. He's like the Anthony Bourdain of war zones. No matter how shitty your current deployment is, you better fucking believe 5 Deployments has been through worse. He's got kids in Clarksville, Leesville, Baumholder, and Alaska, and his profile picture on Facebook is of him in BDUs. When he's not telling war stories, he's reminiscing about the good old days when noncommissioned officers were allowed to do fun things like waterboard privates, back “before the Army got soft.”

Don't be fooled by his gregarious demeanor, or by the fact that he has six kids, or by his mustache. Old Man is only 25. But here, in the platoon, he's the father figure we never had; the guy we turn to for guidance when our girlfriends cheat on us or we come down with a case of the clap. At unit functions, his entire family shows up and eats all of the food. His wife is exhausted from raising so many children so young, but she'll always pick you up from the bar when you get too drunk, and some of the younger guys even call her “Mom.”

Remember how on the first day of basic training or boot camp (or “holiday” if you're in the Air Force), there was that one guy who somehow already knew all of the rules? That's Li'l 1st Sergeant. As the most squared away private in the barracks, Li'l 1st Sergeant's primary self-appointed function is to serve as the acting noncommissioned officer when actual NCOs aren't around. The only thing tighter than his high-and-tight is his grasp of military regulation, which he wields like a battleaxe, making life hell for all of his fellow Joes.

This guy joined the military for one reason and one reason only: to “get swole.” While everyone else hates waking up at the crack of dawn for PT, Gunz lives for it. The PFT isn't just a measure of physical fitness; it's a measure of success, which is why he despises weaklings and fat people. During the week, his diet consists of hard-boiled eggs, protein shakes, and NO Xplode. On the weekends, it's jaeger bombs and poon.