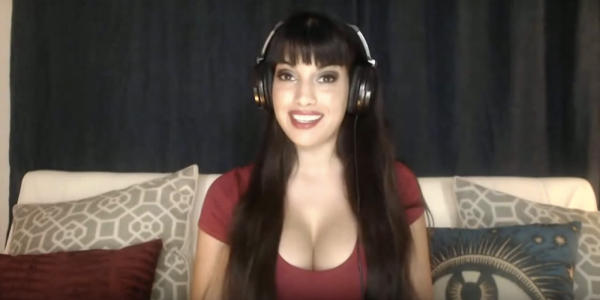 When Mercedes Carrera took a uniformed Army sergeant to the 2016 Adult Video News Awards, it wasn’t a publicity stunt. After all, Carrera’s success as an actress hardly hinges on her reputation as a humanitarian. So when the 33-year-old porn star — whose portfolio includes roles in such films as “Nutz About Butts” and “All About Ass 2” — appeared alongside Sgt. Anthony Berg, a happily married Army reservist and Iraq War veteran, on the red carpet for the AVN Awards in Las Vegas, some were quick to call her motives into question. But Carrera’s support for the military is sincere. The daughter of a Vietnam veteran, she’s well aware of the difficulties service members face when they return home from war. She also knows that many of her fans wear or have worn the uniform.

“Veterans are very supportive of our industry,” she told Task & Purpose. “I get emails from guys all of the time saying, ‘Hey, your work helped me get through deployment. Thank you.’”

What sparked your interest in veterans issues?

My dad was in Vietnam, and he was really active in the VFW. I think Vietnam was probably the first time the tide really turned against veterans. My dad got spit on when he got back.

Literally spit on at the airport when he returned. Right now there’s kind of a similar trend in the mainstream media, and I don’t like that, and I think it’s important for us not to do that. Being an adult actress, you have a platform to talk about things, so I figured that I might as well talk about things that I think are important.

In what way do you see veterans being metaphorically spit on in the media today?

The mainstream media takes its classicism to the point that they malign veterans, which is a really interesting incoherence, because they don’t seem to realize that nobody hates war more than the soldier. But there’s a pervasive anti-nationalist, anti-veteran, anti-military tendency in the mainstream media. When I took Sgt. Berg to the AVN Awards, people said, “Ah, Lady Gaga did that, too!” But Lady Gaga didn’t take a career veteran, she took service members who had been discharged because of the Don’t Ask Don’t Tell policy. So hers was an advocacy for gay rights. I don’t care if vets are gay, straight, trans, or whatever — that’s not important to me. So I do think that in the mainstream media there is kind of an agenda. When they do decide to support veterans, there’s usually another reason for it.

Did you ever consider joining the military growing up?

I did. I worked as an engineer, so I guess I could’ve joined in that capacity, but I don’t think I was necessarily cut out for that environment.

There’s a few. I know a couple of male performers who are veterans; most notably, Brad Knight, who won Best Male Newcomer at this year’s AVN Awards. I think he was Navy. It’s more common with the men, and I know several of the female performers’ husbands are veterans as well. There’s one trans-woman performer I know who’s a vet. I think it really speaks to the fact that there’s all types of people in the military and they go on to do a lot of other things in life.

Was this the first time you ever met one of your military fans?

I’ve met a few, because sometimes we’ll do signings and they’ll come. With Sgt. Berg, I ran a contest, and he won that. He’s a real fan of the industry. To clarify, the contest wasn’t a paid thing — meaning, he didn’t have to become a member of the site, which is something girls will do sometimes. It was open to all vets, but he’s an actual fan of the industry. He follows it the way people follow movie stars. That’s part of the reason he was chosen, and the other part of it was that he’s just a great guy and I liked his story. To me, he just represented the everyday vet. He’s not the Rambo or the guy with the Purple Heart, but the guy who gets the stuff done behind the scene. I brought him and his wife out and paid for that.

What do you say to the people who are giving Sgt. Berg flak for this?

There are always going to be people who are unhappy. I get so much flak on a day-to-day basis for my profession that, honestly, the blowback on this one was way less than I thought it be. I’ve mostly seen positive feedback. A lot of the people who are saying that this is inappropriate are conservative, moral grandstanders — and, by the way, just from a statistics standpoint, they tend to be the greatest consumers of pornography. Sgt. Berg got permission from his CO to wear his dress uniform, and I wasn’t attached to whether he wore it or not, but he wanted to and his CO encouraged him to. He’s a reservist so it’s a little bit more lax. People will give him a hard time for it but he got to go and sit near the front row and have an experience that was worth it to him. That’s why I brought him, too — because I knew that the experience of the event would be worth any blowback he got, just as long as he got permission and it doesn’t affect his career.

Why do you advocate for veterans’ rights?

The biggest reason I advocate for veterans rights is that there’s just not enough conversation about it. What’s unfortunate, though: a lot of the veteran organizations, even if they want to work with me, because of the perception of the industry, they can’t. And so I’ve talked to several, but so much of their base is perceived to be this old, moralistic, conservative group that they don’t want any association with adult performers, which is unfortunate because it’s really easy for someone like me to fundraise. I actually started the first scholarship fund for youth with pornography. I did that last year, and I did it because I was in partnership with an organization and they decided that they did not want to have any link to me so I just decided to start my own. We raised like $14,000 in an hour and a half, but they don’t want my money, so we did that and I just sent a young woman to school for computer science for a year. This is the problem with the adult industry — they give you a platform, but nobody wants to take your money. Somehow my money is filthier than the money that comes out of Microsoft or what have you.