After hearing he had been stop-lossed and would be heading back to Iraq for a second time, Kristofer Goldsmith decided... 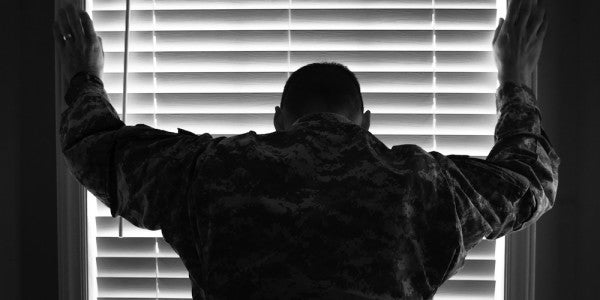 After hearing he had been stop-lossed and would be heading back to Iraq for a second time, Kristofer Goldsmith decided to end his life. Going back to war acted as a trigger to his ongoing and undiagnosed post-traumatic stress disorder that he had been silently suffering since returning home from his first deployment. In May 2007, the young Army sergeant washed down opiates with vodka and walked into a field.

“I woke up handcuffed to a gurney and was told I was getting kicked out,” describes Goldsmith in an interview with Task & Purpose, after being found by police. What should have amounted to a medical discharge with disability for the unseen wounds he suffered in Iraq, resulted in a general discharge, the loss of his Montgomery G.I. Bill benefits, and an abrupt dismissal from the military. But not before the Army also attempted to give him an Article 15 for malingering, or faking a mental illness in order to escape war duty. While this measure was later dropped by his commander, there would be no ceremonious farewell and no reintegration process into the civilian world for this young soldier. He found himself back home in Long Island, New York, still suffering from panic attacks.

Goldsmith’s story highlights the complex issues facing many post-9/11 service members and veterans returning home from war. According to a study released by the Institute of Medicine in June 2014, of the 2.6 million troops who have been to deployed to Iraq and Afghanistan, an estimated 7–20% may have PTSD. From 2003 to 2012, the number of veterans seeking treatment for PTSD increased from 190,000 to over 500,000. The report also noted that “in 2012, 13.5% of soldiers had a diagnosis of PTSD, as did 10% of marines, 4.5% of Navy personnel, and 4% of Air Force personnel,” an indicator that PTSD and traumatic brain injury are the signature wounds of our wars. The combination of over a decade of conflict and multiple tours of duty have wreaked havoc on the military and the system in place to care for the wounded.

Many of these veterans suffering from PTSD or traumatic brain injury have been discharged as “other than honorable” or “general” for behavioral problems related to PTSD, or have been misdiagnosed with personality or adjustment disorders, precluding them from VA benefits because they were deemed “pre-existing conditions.”

Personality disorder or adjustment disorder have very similar symptoms to PTSD, and are usually caused by trauma or a life event. Adjustment disorder, however, only lasts six months whereas PTSD is often seen in patients for well over six months. The complexity of these medical conditions may not be the only reason vets are getting misdiagnosed. It has been an ongoing problem for DoD and the VA as both have been accused of purposefully misdiagnosing veterans to save money on disability checks. The Pentagon denies such allegations and has made efforts to close this loophole of pushing vets out the door without proper diagnosis. As many as 30,000 have been discharged since 2001 for these disorders.

An “other than honorable”discharge is usually due to minor misconduct: drug abuse, being late to formation, and missing appointments. These minor infractions coincide with behavior seen in those suffering from PTSD and traumatic brain injury. Between fiscal years 2000–2013, these types of discharges totaled 125,204. This is often referred to as having “bad paper” and prevents a veteran from receiving medical care at VA facilities and educational benefits. However, what is spoken about even less are those who have “general” discharges, which means veterans also lose benefits and have difficulty finding jobs in the civilian world. Veterans discharged under general conditions number as many as 172,125 since 2000.

An investigative report by the Colorado Springs Gazette published in May 2013 found that “the annual number of misconduct discharges is up more than 25 percent Army-wide since 2009” and the problem is acute on bases that harbor more combat units, such as Fort Carson in Colorado Springs, where misconduct discharges are up 67%. In the Army, over 76,000 troops have been discharged in this manner since 2006. To be clear, this is the active-duty Army and does not reflect the Reserve, National Guard, or other branches of service. The issue clearly needs to be looked at military wide.

As noted by the Gazette, the danger of this lies in the fact that as the branches are pressured to reduce troop levels, minor incidents of misconduct that in previous years would be forgiven are now leading to other than honorable papers that have lifetime repercussions. Service members returning home with behavioral issues and substance-abuse problems (another common indicator of PTSD) are easy targets for dismissal. They are no longer the military’s problem and their medical care is not the burden of the VA because they are not recognized as veterans under an “other than honorable” discharge.

In an interview with NPR, Phil Carter, an Iraq War veteran at the Center for a New American Security, said, “There’s a very, very large cost to society by giving bad paper.” Denying these veterans life-long benefits shifts the burden of care to non-profit organizations and local clinics that do not have the infrastructure to take care of these men and women. The long-term and strategic implications are quite detrimental.

“I signed up to go to war,” says Goldsmith, who after the Sept. 11 attacks, graduated high school, and decided he needed to serve. And he did, rising to the rank of sergeant in two years. He served honorably in Iraq as a forward observer, but was told he was damaged goods upon returning home, where he began to struggle with depression and panic attacks, one of which put him in the emergency room.“I thought I was dying,” he says.

Goldsmith reached out to behavioral health, but the Army’s mental health clinic at the time amounted to “group therapy” — enlisted and officers, women and men, victims of sexual assault alongside PTSD sufferers, crammed in a room and told to talk for an hour. He did not want to go back. Because this happened before PTSD was better understood by the military as a serious medical condition, Goldsmith’s behavior of melancholy and distress became synonymous with being a “shit bag.”

After being discharged, Goldsmith went home to Long Island and began filing for disability — under a general discharge, soldiers still have access to VA healthcare. He began receiving treatment for PTSD and went back to school. While at Nassau Community College and serving as president of the veterans’ club, Kris began drafting proposals to take on Capitol Hill and make changes to Title 10, under what would ultimately become the Military Mental Health Review Board Improvement Act. This would open up the review process for those 30,000 troops discharged since the War on Terror began in 2001 for adjustment and personality disorder, with the caveat that a mental health professional be part of the review process. Prior to this bill, there was no expert on the board who could attest to whether or not the veteran may have been suffering PTSD when discharged.

The bill passed in both houses and was signed into law in December 2014, opening a review process for all veterans who were discharged under other than honorable conditions and who think they may suffer from PTSD. Additionally, adjustment disorder has since become a condition for which one can medically retire. However, none of the upgrades are automatic and veterans must wade through the appeals process, which can be daunting and re-traumatizing. The Army created a new website to begin this process and they could expect thousands of appeals. While former Defense Secretary Chuck Hagel made it clear that all military boards must implement the change and conduct public messaging to ensure the word gets out, it is unclear how many have started the process or how many cases have been overturned since the bill passed. However, the “liberal consideration” supposedly given to those seeking appeal does not seem to include general discharges. This is concerning as many of those vets face similar struggles when kicked out of the military.

Kris Goldsmith (left), an Iraq war vet, with Bill Rausch, political director for the Iraq and Afghanistan Veterans of America, conduct a rally in Upper Senate Park, December 4, 2014. The group held a rally before delivering over 58,000 petitions, held by Rausch, to Senate Majority Harry Reid, D-Nev., urging him to bring the Clay Hunt Suicide Prevention Bill to the floor.

Goldsmith appeals his case again next month; this time hoping to see a mental health professional on his case. The law clearly states that a “psychologist, psychiatrist, or a physician with special training on mental health disorders” must be present. Those who fought for this bill hoped the military would make it explicitly a psychologist or psychiatrist, but with shortages already in those fields, the Pentagon is afforded the loophole of “special training.”

“I just hope it’s not a foot doctor who they put in front of a PowerPoint on PTSD and labeled it ‘special training,’” laughs Goldsmith, still able to handle the uphill battle with a sense of humor.

While receiving bad paper for misconduct or criminal offenses is sometimes deserved, it is on the military to help those whose behavior is a result of combat-related PTSD or traumatic brain injury. The military has a tough job ahead of it in determining how it will review thousands of cases and define, medically, which ones are legitimate. This is no easy task, but the change in policy is a step forward and will greatly help those veterans who have been shut out from benefits due to a lack of understanding and forethought. Many Vietnam-era veterans, who have gone untreated and without benefits for decades, will be appealing their discharges as well.

There is a moral imperative to fix this wrong. The hope is that aid comes quick enough for those living without proper care. And those previously denied an upgrade, like Goldsmith, should be allowed to appeal their cases again with the new guidance.