Navy Blue Angels had to change their show after jet caused $180,000 in building damage

The Blue Angels tweaked the low-flying "sneak pass" after the sonic airflow from one of its jets shook up a Navy building in California last year. 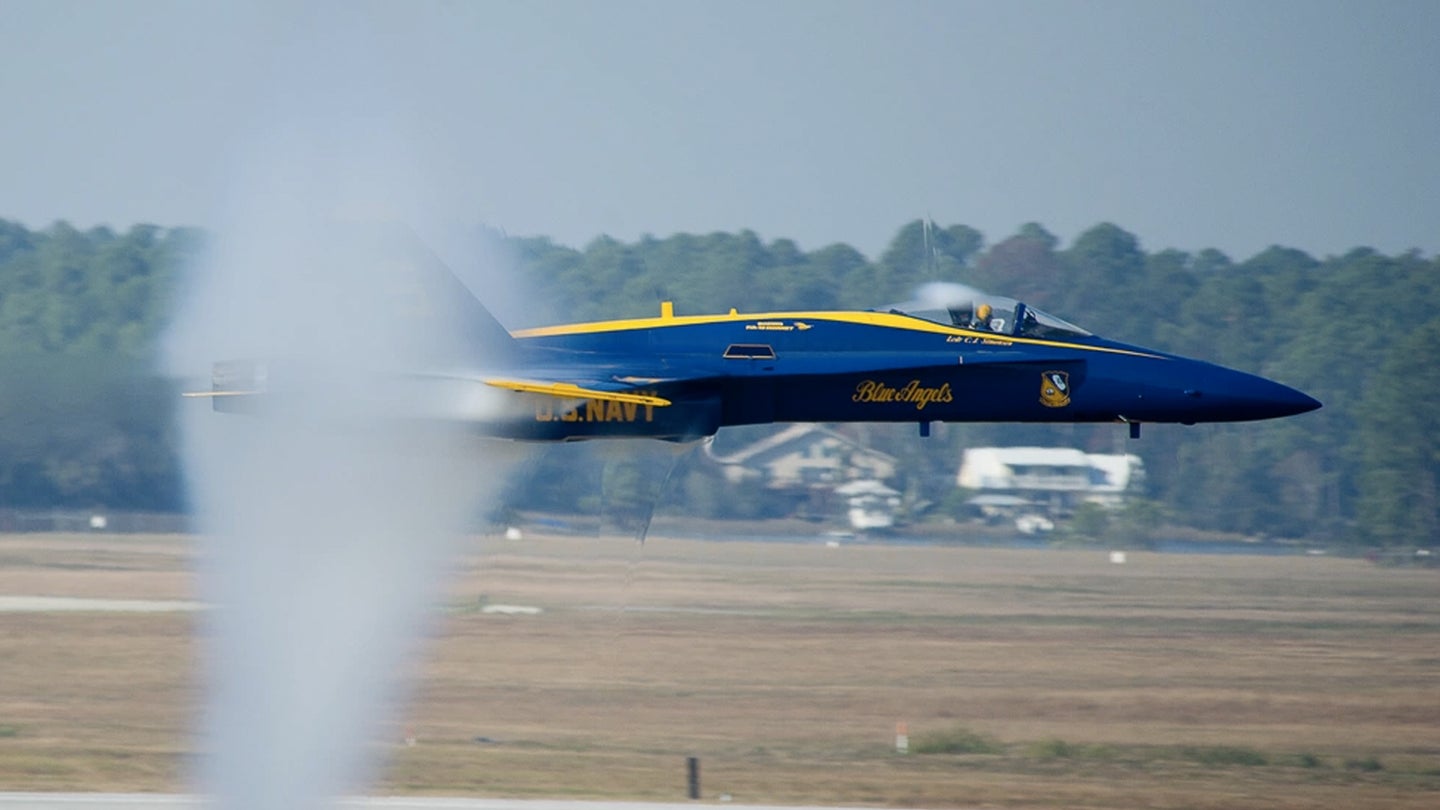 The Navy Blue Angels modified their routine after an F/A-18 Super Hornet accidentally shook up a few buildings last year at Naval Air Facility El Centro, California, causing $180,000 in damage and injuring a dozen people, according to a recently-published investigation by The Seattle Times.

According to the Navy incident report shared by the Seattle Times, the damage was caused when a Blue Angels pilot flew a little too close to buildings and a little too fast during a “sneak pass” maneuver at the base on Jan. 21, 2021. The sneak pass involves flying as low as 50 feet at about 700 miles per hour, which is just under the speed of sound, according to the Blue Angels.

The sonic wave created by the sneak pass shook walls, picture frames, and ceiling tiles, covered people, furniture, and floors with heavy debris, dislodged sheathing in shear walls, pulled nails out of plywood framing, cracked drywall, and broke windows. Firefighters reported ringing in their ears and headaches and were concerned with possible respiratory issues from fallen dust and debris, but they did not report lingering effects, the investigation found. Thankfully it seems none of the 12 people hurt by the flyover were seriously injured, though it sounds like it was a frightening experience for some. One witness said it felt as if “an airplane had just crashed into our building.”

The investigation found that the pilot was not the problem, since he had not deviated far from the team’s established safety boundaries. Instead, one of the top contributing factors was the jet. From 1992 to 2020, the Blue Angels flew F/A-18 Hornets. But starting in the 2021 show season, the team started flying F/A-18 Super Hornets, which are larger and heavier than the older Hornets, but also have longer range and reduced maintenance demands, according to the Navy.

As the fans and bystanders found out personally on Jan. 21, 2021, the Super Hornet’s engine “creates a noticeably larger localized sonic airflow area” compared with the legacy Hornet, the investigation found. Airflow is the movement of air and in this case it refers to how a jet pushes the air around it mid-flight, almost like a boat cutting through the water. At subsonic speeds, the effects of airflow “are not pronounced,” according to NASA. But as airflow velocities increase, the air becomes compressed until distinct pressure waves, also known as shock waves, begin to form.

These shock waves start appearing at transonic speeds, where an aircraft is right on the cusp between subsonic and supersonic and bubbling between the two. But the shock waves grow more intense as the jet gets faster and the air around it grows more compressed. “These effects are far-reaching, even extending to the ground in the form of sonic booms,” NASA wrote.

Though witnesses did not report hearing a sonic boom, the pilot flew over Naval Air Facility El Centro at 0.97 Mach, which was fast enough to generate a larger airflow compared to the legacy Hornet. That airflow still may not have damaged the buildings at El Centro if not for several other contributing factors. First, the Blue Angels safety regulations require aircraft flight paths be at least 500 feet away from the crowd line, and the pilot in question flew about 80 feet into that bubble, which took him within 73 feet of an administrative building and within 20 feet of a fire department building.

He was also flying 15 knots — about 17 miles per hour — faster than the 620-knot indicated airspeed limit. These deviations were “reasonable,” the investigation wrote, but the pilot was actually moving faster than he thought he was. A rear-view camera mounted to the underside of the jet led to a .01 error in the aircraft’s indicated Mach number, so the pilot thought he was flying at .96 Mach when he was actually at .97 Mach, which sounds small but it increased the sonic wave travel by about 40 percent, investigators wrote.

Damaging incidents like this are rare in Blue Angels history. Navy officials told The Seattle Times that the sneak pass maneuver has been performed safely for decades at air shows around the country, and the Jan. 21, 2021 incident is the only known time the maneuver caused damage, even when flown by other Super Hornets. Still, the Navy investigation recommended Blue Angels pilots stop their sneak pass maneuver if the flight path passes within 500 feet of the crowd line or within 200 feet of “any structure, vehicle or personnel.” The recommendation also calls for removing rear-view cameras on solo aircraft, measuring speed during a sneak pass with Indicated Mach Number, and reducing maximum speed during a sneak pass from 0.96 to 0.95 Indicated Mach Number.

“Based on the airflow signature modeling … these revisions will provide a substantial reduction in the probability of reoccurrence while best preserving the spirit of the maneuver,” investigators wrote.

So don’t worry, airshow fans, you’ll still get plenty of bang for your buck from the Blue Angels, it’ll just be with less risk of shattered glass this time.