Editor’s Note: This article by Steve Schiff was originally published on Fatherly, a digital lifestyle guide for men entering parenthood.... 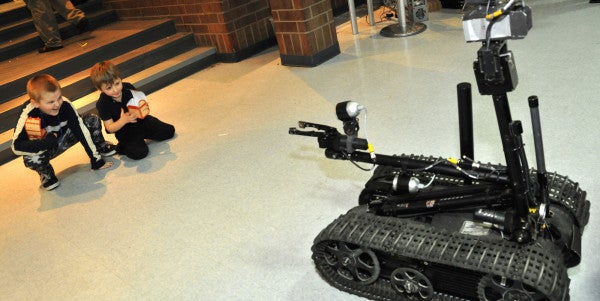 Editor’s Note: This article by Steve Schiff was originally published on Fatherly, a digital lifestyle guide for men entering parenthood.

This article was produced in partnership with our friends at GMC.

Everyone seems to agree that kids need to learn how to build things, but if STEAM education seems unapproachable, take heart. It’s entirely possible for you to impart those very necessary, highly in-demand skills on your kid without actual steam coming out of your ears — or your kid grinning over a pile of disassembled laptop parts.

Take it from Jenny Young, who grew up taking stuff apart and putting it back together with her engineer dad in his Ohio garage shop. You know, like all girls do — or so she thought, before obtaining her Mechanical Engineering degree and finding few other women in her new peer group. That’s partly why she started Brooklyn Robot Foundry, a school (now 3 schools, actually) where kids age 2 to however old you are learn to solve problems, get STEAM educated, and, most importantly, make things. Specifically, things that go, “Beep-boop” and help save the universe from the Death Star.

Okay, so R2-D2 isn’t on the syllabus … yet. But if you follow Young’s simple tips, you can empower your kid with a fighting Jedi spirit through trial-and-error and building. Besides, as the saying goes, that’s not the droid kids are looking for. These days, it’s all about drones. “Everyone wants to make a remote-control flying machine, because that’s awesome, right?” Young says. “We say, ‘Start at this level. Maybe when you go to college you can build a flying robot.”

Related: 4 Military-Inspired Tactics For Teaching Your Kids A Little Discipline »

Start With What They Know

Part of the problem with teaching engineering is the false preconception that it’s too complicated or difficult for you to grasp, let alone a small, questionably functional human. Young has found building around everyday materials demystifies the whole operation. Let kids build with familiar arts and crafts supplies — popsicle sticks, pompoms, googly eyes — then add simple engineering components like LED lights, and boom, baby’s first circuit.

The Foundry’s entry-level class is called “Tiny Builders,” and the 2-to-4-year-old kids’ first project is a simple vibrating motor attached to an offset weight that the kids decorate however they want. Is it a frog? A princess? A gimpy elephant? Who cares? You built it, now you can make it look like whatever you want, and no one has to do any math.

But don’t those Tiny Builders have equally tiny hands? And attention spans? Yes and yes. So attach connectors to the individual components. Then, all little Sausage Fingers over there has to do is snap the motor into the battery pack.

Eventually, they’ll be old enough to make those connections themselves. For now, they see the physical circle of electricity and get the concept, which is something many STEAM toys actually fail at. By hiding the components in colorful blocks, they teach kids to snap together a toy but not how it works. “At the Foundry, you see the motor, the gearbox, the battery pack,” says Young. “You’re physically looking at what the electricity is doing, and it’s actually easy to understand.”

On attention spans, Young says, “Something exciting basically has to happen every 5 minutes.” The Foundry breaks their introductory lessons into storybooks that align with the build. They start with pass-around games (“Who has the motor? Who has the battery pack?”), read some story, build for 5 minutes, and repeat until 45 minutes have gone by and no one’s wandered off.

Play To Their Strengths

For the bajillionth time: every kid is different. Older kids have better motor skills and less stubby fingers, but attention can still be an issue. It may take them 40 minutes to build a robot that only takes you 10. Chill, and remember that you’re still doing a project meant for a child.

Some kids might be more interested in design and decorating than building. Other kids might want to try and build things in ways you think might not work. Middle schoolers might care more about socializing than tinkering. Great. Whatever keeps them engaged. Young says those kids often end up creating bots that land on future Foundry curricula, or working through problems in groups before ultimately teaching it to their peers.

“Children haven’t been around long enough to hear ‘No’ so much, so they can create and build without preconceptions. Let them do that, fail, and try again and see what they can create.”

As a parent, your instinct might be to take over a project when your kid doesn’t seem to be getting it. But the real “Aha” moment comes when they realize they’ve made something themselves that physically moves and works. So let them fumble and fail their way there, like you with your most recent promotion.

The Foundry calls this “The fun of the build.” It’s their slogan and their mission. “Every kid doesn’t need to be an engineer, but every child should realize they can build things and see how fun it can be,” she says. “Things aren’t always going to work, and that’s okay — that’s awesome. You have a problem, you work and create and build some more and try again and figure it out.”

That goes for you, too, STEAM-phobic parent. In fact, the greatest lesson of all can come with trying and failing together. “It’s eye-opening for the kid to realize their parents don’t actually know everything,” Young says. “It’s fun to fail with your kid! Then you try again and it works, and how great is that?” Fail with the kid … that’s what you’d call a light bulb moment.

If you want to witness that moment for yourself, of course Young would be glad to have you and Junior sign up for the Foundry’s next session. If that’s not an option, try building this simple, adorable walking stick robot together at home. It’ll take you less than 2 hours and only cost you some easy-to-obtain supplies (many of which you probably already have). It’s a small price to pay for a kid who knows how to put together a gearbox.

This article, “How To Turn Your Kid Into A Robot Engineer So They Can Save You When The Robots Take Over,” originally appeared on Fatherly.