Why More Military Spouses Need To Share Their Stories

I’m a 21st century military spouse. I am a college-educated, working woman who has been supporting my service member’s commitment... 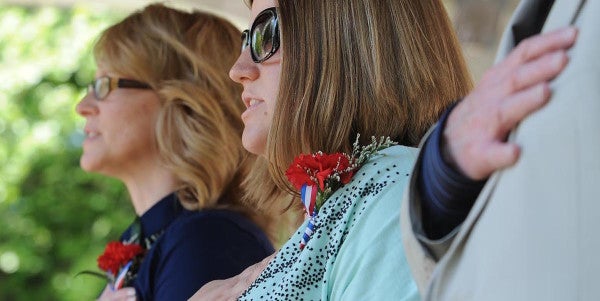 I’m a 21st century military spouse. I am a college-educated, working woman who has been supporting my service member’s commitment to our country for more than a decade.

I gave birth in an overseas Navy hospital. I’ve been a solo parent during a six-month deployment. I vote via absentee ballot in presidential elections. I shop at the commissary. I’ve lived on-base in privatized housing. I’ve lived off-base in neighborhoods where our house was the only house with an American flag hanging in front.

Am I a typical military spouse? Maybe.

I’m an avid reader of historical fiction. In the evenings, after the kids are asleep, I often find myself absorbed in fiction set during World War II. I ponder the plot lines and character development, especially the women who held down the homefront during the war. If I was a military spouse in the 20th century, what would my story be?

Then the realities of my military marriage bubble to the forefront in my mind. I ask myself, How will my grandchildren view my role as a Navy wife when they learn about the war on terrorism?

When future writers examine the history of today’s military families, will they see a story worth writing? Will our stories be worth reading or making into an award-winning film? Will ours be a story worth telling? What will be the major themes of this future historical fiction?

In my opinion, the stories of the 21st century military spouse share three common traits: longevity, vigilance, and connectivity.

We’re in for the long haul.

The first theme in this war story is longevity. In April, the Month of the Military Child, we often read about military children who are impacted by the wars in Afghanistan and Iraq. Their day-to-day military lives are shaped by the events of Sept. 11, 2001. They don’t remember a day when the United States didn’t have troops in the Middle East.

The same is true for the 21st century military spouse.

A 21st century military spouse knows a neverending war. They scoff at banners declaring victory, but still feel hope when the president announces “troop drawbacks.” Then comes the surge. Then it’s more training of soldiers in a nation that I’ve never been to, but the foreign land’s name rolls off my tongue like it’s a second home. The 21st century military spouse has been in it for the long haul.

Military life today falls under a cloud of constant vigilance. The threat, either overseas or homegrown, never takes a backseat. Our minds don’t get a break from the peril of fatal injury for our service members.

When tragedies like the shooting at the recruiting station in Chattanooga, Tennessee, happen, 21st century military spouses add this threat to their growing daily worries over their service members’ dangerous jobs. When a mass shooting leaves 12 people dead at the Navy Yard, we no longer feel safe inside the gate. When an Iraq War veteran kills three at Fort Hood, we wonder why.

We accept that our husbands and wives put their lives in harm’s way during a deployment. We don’t expect their lives to be on the line when they’re home, but it’s becoming more and more of our reality.

It is a text message instead of postage. There are military installation Facebook groups instead of social functions. The 21st century military spouse is always connected to her service member, other military spouses, and their civilian friends and family members through her computer or cell phone. This network — which connects Army wives stationed in Okinawa with those unpacking in Texas — is shaping our military story.

In the past, military spouses were limited to the friends and resources at their duty stations. Today, their social media circles move with them whenever they relocate and websites, not handbooks, are the guides for navigating military protocol. For the growing number of male military spouses (9%), dual-military couples (6.4%), same-sex military families, and transgender military spouses, this digital network can be a lifesaver when feeling isolated on post.

This connectivity doesn’t end when deployments start. Smartphone applications like Skype and FaceTime allow military couples to see each other during frequent separations.

The story of the 21st century military spouse is a complex one that is worth taking the time to listen to and worth telling. Don’t be afraid or ashamed to tell your story. We want to know your story. America needs to hear your story.