When A Military Family Becomes A Gold Star Family

Editor’s Note: This is an excerpt from “My Father’s Son,” a new novel by Andy Symonds, the son of a... 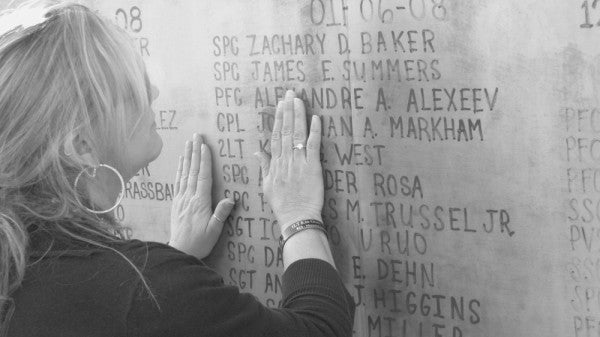 Editor’s Note: This is an excerpt from “My Father’s Son,” a new novel by Andy Symonds, the son of a Navy captain.

It was my mom’s scream from downstairs that finally shook me out of bed that morning. It couldn’t have been more than a moment after the doorbell rang and she left my room, but somehow I had managed to drift back into a protective sleep.

Suddenly I found myself standing at that sunny window in my bedroom, shades ripped back, my short breaths fogging the panes that just minutes before had brought light into the room. Now, through that same lens, my panicked eyes focused on a dark blue sedan parked in the driveway. Two ashen sailors were adjusting their covers as they respectfully stood at attention on the front porch. One appeared to be a chaplain while the other was wearing standard Navy Dress Blues – with one difference. My eyes instinctively went to the large gold pin on the stockier man’s uniform. It rested proudly on his upper left breast and blazed brightly, like it had a life of its own. The anchor, trident, eagle, and pistol. A relatively small object that told a much bigger story. That signified its wearer as a warrior elite. A U.S. Navy SEAL. It was the same pin that I had looked upon with fascination on my dad’s uniform. The same pin that when he let me hold it, under his direct supervision, I cradled in my cupped palms like the treasure it was. My eyes ignored the other ribbons and medals on the man’s uniform, the white collar on the chaplain’s dark suit. I stayed focused on that symbol of strength, drawing solace from the Trident. Not crying, barely breathing, but knowing what their presence meant.

I watched their faces register devastation as a second shriek echoed throughout the house. She must have been standing at the large plate glass window in our living room. From that window she would have a clear view of these nervous sailors standing on our stoop, bouncing on the balls of their feet. I knew she was hoping that if she didn’t open the door, didn’t invite them into her home, didn’t hear their message, then the inevitable wouldn’t have happened. I knew better.

Looking back, I gravely wish that I had walked down those stairs to comfort my mother and stand with her to face the notification team. As a matter of reason but not excuse, I can only say I was frozen in my confusion and rising heartbreak, which lead me to merely observe the scene from the distance of my bedroom window. My inaction that day is one of the great regrets of my life, and something I reflect on often.

While I watched them wait for someone to answer the door, I tried to pause time. No, I tried to rewind it. Not to reverse what had happened – I knew that was asking too much. But just to bring it back a few minutes, back to before the doorbell rang, before my mother retreated from my bed, before these two men came to the house that I lived in with my sister, my mother, my father. I knew that if I could just go back to that minute, to those precious seconds before I knew, back to when my mom’s cool hand was on my forehead, when everything was still fine – if I could just feel that peace and security one more time, I would never let it go. I scrunched my eyes as tightly as I could that morning, willing myself back to that place, as even now I still occasionally do. Sometimes, I almost get there. Almost. But as I unclenched my eyes that day, I knew nothing would ever be as it had.

What had been a sluggish swirl of motion quickly sped up, sending a rush of blood and adrenaline to my face. For a moment I thought I was going to barf, right there on the damn window. I was frozen to it, watching the chaplain and SEAL walk through the front door, my muscles contracted and tight. My stomach finally quieted and the sourness subsided. Time and sound seemed to pause, nonexistent for how long?

She was standing in my doorway in her favorite Hello Kitty pajamas, sporting untidy pigtails, disordered, rubbing her eyes. There was a sudden realization that at thirteen, I was now the man of the house. As Dad had always told me I was when he was gone. And now, he was.

Excerpted with permission from My Father’s Son. Available from Mascot Books. Copyright © 2015.