The Senate has found a new way to save money, but this time it’s at a cost to military families... 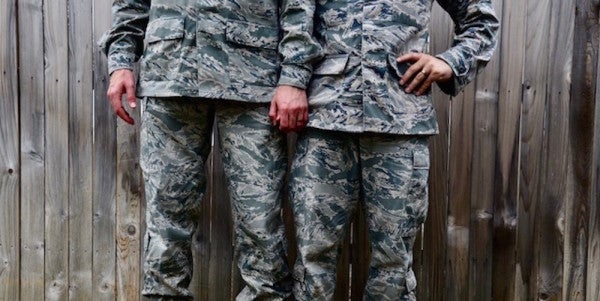 The Senate has found a new way to save money, but this time it’s at a cost to military families — specifically those where both spouses are active duty service members.

A new proposal considered by the Senate Armed Services Committee last week would require that dual military couples receive basic allowance for housing (BAH) stipends at the “without dependents” rate, even if they have children. Because, these families currently receive two housing allowances, the Senate apparently believes they they don’t need the bonus housing cash that is given to military families who have children.

Around 6.4% of active duty service members are in dual-military marriages, according to a 2015 Department of Defense report, and Military Times estimates there are 84,000 dual military couples across the armed forces. It is unclear at this time exactly how many couples would lose their dependents bonus.

For many military families, this is an alarming proposal, but not a surprise. Fiscal year 2018 marks the third year in a row that the Senate has tried to cut basic housing allowances through the National Defense Authorization Act, according to Kelly Hruska, government relations director with the National Military Family Association.

“We don’t like it,” Hruska told Task & Purpose. “We haven’t liked it for the past three years.”

According to Military Times, the proposed plan would save roughly $300 million over the next five years. To put that number in perspective, a single F-35 Joint Strike Fighter aircraft costs around $100 million, which makes the savings of $60 million a year hardly seems worth valuable financial assistance for thousands of families.

“This is the third time they’ve tried this, and the savings is just so minimal,” Hruska said.

The change would not immediately impact families, however. The end of the dependents bonus would come into play when families receive their next permanent change-of-station assignment, Military Times reports.

The Senate believes that the current BAH is too high, since the payout rates are typically higher than the cost of living in the areas where service members are stationed. But the Pentagon says BAH is a necessary part of military family compensation. The money, though distributed for housing, is not always used for rent or mortgage expenses — nor should it have to be, according to advocates.

“You’ve got both parents serving and you want to cut their housing allowance? To us, it’s just petty,” Hruska told Task & Purpose.”It’s ridiculous.”