What It’s Like To Finally Understand The Realities Of War 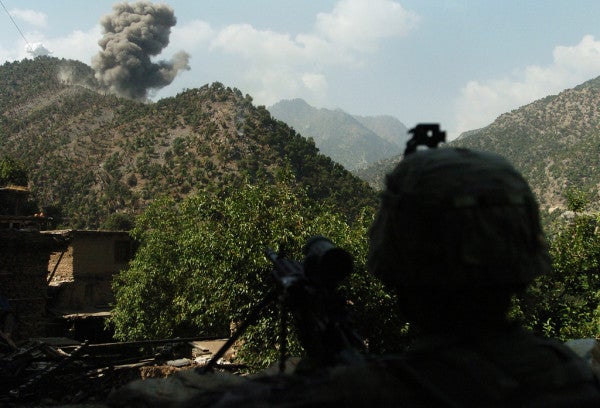 Best known for his compelling coverage of the war in Afghanistan, Junger released a book called “War,” in 2010 that closely examines the nature of combat. The book follows his embed with a platoon of U.S. soldiers deployed in Afghanistan's Korengal Valley. He and his colleague, the late photojournalist Tim Hetherington, were also nominated for an Oscar in 2010 for their documentary, “Restrepo,” a visual extension of Junger’s book.

On July 11, 2012, Junger spoke at an event posted by the Moth, a nonprofit organization that hosts live storytelling events around the world, sharing one of his own war stories. Junger’s story was recorded and released as part the Moth Radio Hour podcast series on Aug. 18, 2015.

“I’m used to talking and explaining how things work. And then I started to understand that’s not what the Moth is. What you’re really doing is telling a story and allow people to understand something more deeply,” Junger says on the podcast, referring to crafting the story he shared that night.

Moth stories are some of the “most important, most defining stories of a person’s life,” according to producing director Sarah Austin Jenness. In this instance, Junger recounts the day he learned about the death of Hetherington on Twitter. Hetherington was killed by a mortar on April 20, 2011, while covering the Libyan civil war in the city of Misrata.

That same day, Junger received an email from a Vietnam veteran from Texas who he and Hetherington both knew. He references it as part of his Moth story. The email read:

Sebastian, I’m so sorry about Tim. But I have to tell you something. It might sound callous, I gotta tell you. You guys with your books and your movie, you came very close to understanding the truth about war. But you didn’t get all the way. The core reality of war isn’t that you might get killed out there. It’s that you’re guaranteed to lose your brothers. And in some ways, you guys didn’t understand the first thing about war. And now, Sebastian, you’ve lost a brother, and you understand everything there is to know about it.

Junger didn’t find the note callous. He agrees with the veteran’s perspective.

Junger has continued to grapple with the experiences he had in Korengal and with the loss of his “brother.” He directed a documentary released in 2013 by HBO called “Which Way Is The Front Line? The Life and Time of Tim Hetherington” — a tribute to the career of the accomplished photographer. In the film, Junger references the email he received from the Vietnam vet about the reality of war.

Sebastian Junger discusses his film after screening the 77-minute documentary, Which Way is the Front Line From Here?Photo by Lauren Gerson, LBJ Library

Junger also released a second documentary in 2014 called “Korengal” that turned unused footage from his Afghanistan embed into the story of the relationships forged in combat. His most recent film, “The Last Patrol,” premiered on HBO last year and followed a 300-mile trek he took with two combat veterans featured in his previous documentaries, as well as Spanish photojournalist Guillermo Cervera, who was with Hetherington when he died. It was a trip Junger and Hetherington originally planned to take together.

Junger has since spoken publicly about why veterans miss war and their struggles with post-traumatic stress when they return home.

You can listen to Junger’s full Moth story here.