5 Ways Being The Boss Changes When You Leave The Military

Being a boss in the military was about hard and fast conformity. But this stops after service, and civilian employees... 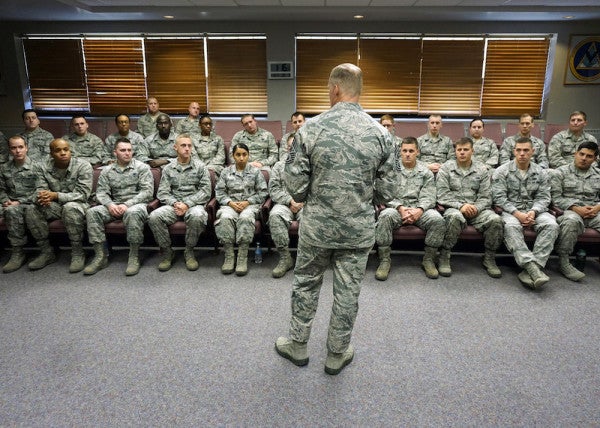 Being a boss in the military was about hard and fast conformity. But this stops after service, and civilian employees can actually quit when they want (and they do). This alone can be hard to swallow for some veterans. In addition, negative stereotypes continue to shadow veterans, despite a generation of Americans that take great pride in their vets. It’s become so widespread that even the joint chiefs of staff are making public note of it. Today’s veterans are having to think more and more about how people are perceiving their transition as much as the transition itself.

Being a freshly minted civilian in a position of authority can come with a little pressure. What will your new subordinates think of your ability to lead? Should they refrain from confrontation with you?

Here are five simple things to remember so that your new team has an even-keeled perception of your leadership:

1. You can’t make people do push-ups.

Gone are the good old days of “Do it because I said so, or else I’ll make you sorry.” The first and most important thing you can learn about your new leadership position is why people will listen to you. Motivating people to want to listen to you is a long sought after objective in leadership (with plenty of YouTube videos to help). Ugly punishments tends to decrease morale, reduce productivity, and increase self-terminations (which costs you experience). So, instead of wasting your time trying to force people to work hard for you, take some time to show them why they should want to work hard for you.

Unless you’ve gone from being a military doctor to a civilian doctor, or something similar, you’re generally going to find that your decisions are less on the plane of “dissecting a village’s insurgency problem” and more like “figuring out why your supplier is late on their deliveries again.” Leniency is no longer a sign of weakness, but actually counts toward a reputation of being understanding and flexible. Remember that a good sign of leadership is how you handle your team’s mistakes. Normal people don’t enjoy the thought of being a failure, and subordinates can often make mistakes due to a process failure that needs attention. A calm demeanor in the face of error, combined with a level-headed approach to repairing it, can earn your people’s trust and loyalty.

Leadership and followership in the military is based on a strong sense of protocol. People call you “sir” or “ma’am” because the rank on your shoulder demands that they do. In the civilian world, and especially with newer generations, employees prefer a more personal work environment. Attempts to enforce military-style protocol will make people feel inferior and will alienate them. Without harsh protocol measures, people’s attitudes toward you will be a reflection of their opinion of you. If you’ve earned their respect or loyalty, they’ll show it. Try facilitating a comfortable office atmosphere that makes people productive and happy to be so.

It’s not exactly polite to get into people’s personal business as a civilian boss. You can’t ask your team members how their free time might be a reflection of your company. Civilian employees have a right to keep their personal lives personal, so long as it does not affect their performance at work. While many rules still apply, such as how a worker’s drinking problem will cause them to fail performance or attendance standards, questioning the habits of a colleague’s personal life is hardly an issue for a supervisor. Do your best to keep a pulse on what goes on in your people’s lives so you can be supportive, and also be aware of indicators of serious issues such as depression or addiction. But leave work at work and home at home.

Everyone who has ever served knows that you never actually take off the uniform, and no vacation is safe from a unit recall. But hourly and (especially) overtime-exempt employees expect to be given a break when the office lights turn off. It’s well known that stressing your employees well into the evening can break down morale and overall personal health, so much so that Germany may even ban the practice. What’s important to realize is that folks need a break. It’s essential to allow for personnel time to decompress, focus on their personal lives, and come back to work refreshed. Check with your local labor department to make sure you’re in compliance, and remember that keeping your employees happy is equal to keeping your employees.

Two things that the military taught us that do translate well into civilian practice: employee support and documentation. Support of your unit members in the military is a pillar of military heritage. Civilian employees openly embrace this practice as that of a caring and thoughtful employer, and it’s not a trait that should be lost on them. When things do go wrong, documentation is the military trait that will save you. Proper documentation of all employee dealings makes your life easier, your employees’ work lives better understood, and the legal complexities therein much easier to navigate.

Veterans are supremely qualified for leadership positions thanks to the military’s strong focus on organizational and management skills. Stereotypes must still be overcome and disproven, but the end result will show that our nation’s veterans are both up to the task and prepared for the responsibility of once again being in charge of great people that produce great results.