Sea stories and tall tales fill every VFW hall from open to close every day. Veterans tell stories of how... 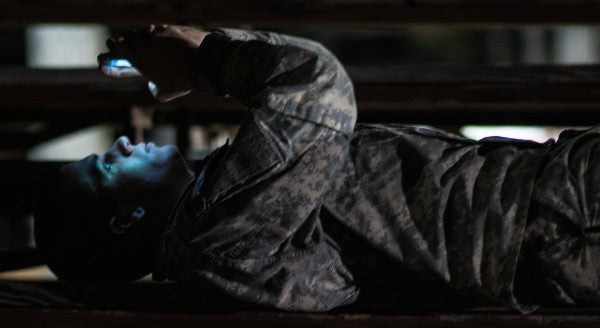 Sea stories and tall tales fill every VFW hall from open to close every day. Veterans tell stories of how much harder things were in the old corps, and that the new corps is nothing but fluff. There are tales of heroism and valor and a million incredible deeds someone else did. These stories are great time killers, but they present a catch. As veterans and service members, we constantly revisit the past, and all we talk about is “back when.” It’s time to cut that shit out now. Your after-service slump is not doing anyone any favors. But if you admit the real reasons why you miss the military, you can find ways to compensate.

1. You miss the camaraderie.

Yeah, you had some really close friends, and they were literally battle tested. It’s no surprise that under those circumstances we bond so closely with the people around us and hold them dear to us like family. The problem is that you hold on to the mindset once you’re out; the notion that it requires misery and conflict to build a tangible relationship with other people and let them into your life. Instead of making an effort to reach out to civilians and open up to them, like they do, we go into lockdown mode and push everyone as far away as possible.

What to do about it: Start making a conscious effort to adapt to the culture of the people you’re spending time with either at work or in your extracurricular activities. By reaching out to them, you may find they reach back for insights on life-strengthening bonds and friendships.

2. You miss the lifestyle.

Barracks life is cluttered with nights of heavy drinking and other chaos and calamity that jarheads find fun. As sailors, we partied our asses off every port they hit on a deployment. You worked hard and played harder, and why not? You had guaranteed disposable income and sustenance that wasn’t going anywhere regardless of how many hours you worked. After the military you either hold on to the drinking, or the working, or both, which starts causing problems. Especially when your civilian counterparts don’t share in your revels and don’t find that lifestyle as appealing. While we find it fun, and it’s part of our culture when we’re in, it does not correlate to civilian life when we’re out.

What to do about it: Accept the invitations that you’re given to participate in events and gatherings. Step back and realize that you’re part of the rest of the world, and there’s a fun and decent lifestyle there too. Also, not every event needs to turn into an all-night drinking fest. Think moderation.

3. You miss playing with guns and blowing shit up. Then getting paid for it.

Let’s be honest: We all think guns are cool, and bombs are cooler. The only thing better than playing with these two bundles of joy is getting paid to make things go boom. There aren’t a lot of jobs in the private sector that involve carrying weapons, making the jobs that to highly competitive. Sadly, veterans are often stuck joining the workforce in other career options with much less excitement than we’re used to and left to toil away in mundane jobs to scrape by.

What to do about it: Exercise your Second Amendment right to bear arms. While a .22 caliber rifle modeled after the M4 doesn’t pack the punch or bang, it’s a much cheaper alternative to still get in a bit of lead-slinging therapy on weekends.

Face it, pride and excellence are something that’s been drilled into your head harder than a railroad spike, and it carries over. Take a look at your closet. Are all your hanging items facing in the same direction? Still fold your skivvies the way you were taught in boot camp? Do you cringe at Irish pennants and gear adrift? We often strive to do things at a level of excellence and perfection well above our civilian counterparts, and then get sassy with them when they fall short of our expectations handed down through our military programming for doing it well, and doing it right the first time.

What to do about it: Make an effort to help others see why you do things the way you do by explaining in a constructive manner. Your constant drive to be excellent in a positive and productive way can help develop a culture of higher standards at your new workplace that becomes the standard practice there.

Open and honest conversation is something you can get away with in the military. We turn everything into an acronym and have analogies for every other item, verb, and action ever created. Blue falcon anyone? We’re able to be so blunt about what we think and feel while in the service, mostly because they can’t, or perhaps won’t, get rid of you for your mouth. The civilian world, however, will drop you like a hot sack of rocks for saying anything that hurts the sensitive feels of a co-worker. As such, we stop talking to other people and internalize our thoughts, opinions and ideas, rather than making an effort to talk like the rest of society and show our ability to adapt.

What to do about it: It’s hard to open to up and spill your guts to other people in a way that won’t scare the shit out of them. Practice jotting down some of your thoughts and rewriting them in ways that sound slightly more delicate than you’re used to. Be deliberate in your interactions and give sincere thought to what you say to people, and how you say it. It’s easy to come off as standoffish and condescending to your civilian counterparts.

As humans we often become creatures of habit and maintain certain trends in how we interact with people, the way we talk, and the manner in which do things. It’s so easy and mindless to continue down the path we started ourselves on, but just as easy to offend others or alienate ourselves from the rest of the world by driving along on autopilot. Making sincere and deliberate efforts to improve small areas of your life can have an immensely positive impact on your interactions with others and the relationships you build after the service. You’re the one responsible for your quality of life and limited by the efforts you’re willing to make to improve your day to day.