Read The Terrible Letter A Military Fiancee Found On Her Car

Ellen Wilson, a young woman in Georgia, found a terrible letter on her car recently, all because her fiance is... 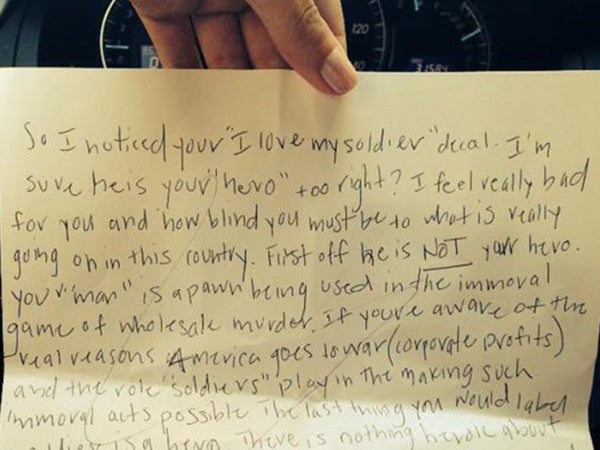 Ellen Wilson, a young woman in Georgia, found a terrible letter on her car recently, all because her fiance is a soldier in the U.S. Army, according to a recent story in the Independent Journal Review.

Wilson boasts a decal on her car that reads, “I love my soldier.” Well, apparently, someone took offense to that and took the time write her a terrible note rife with conspiracy theories about war and hatred for people in uniform.

Wilson put the photo on her Facebook page, where IJReview presumably found it.

So I noticed your “I love my soldier” decal. I’m sure he is your “hero” too right? I feel really bad for you and how blind you must be to what is really going on in this country. First off he is NOT your hero.

Your “man” is a pawn being used in the immoral game of wholesale murder. If you’re aware of the real reasons America goes to war(corporate profits) and the role “soldiers” play in making such immoral acts possible. The last thing you would label a soldier is a hero.

There is nothing heroic about blindly following immoral orders from a undeserved paycheck, especially when such orders involve the unnecessary murder of others!!! It’s people like you and your “soldier” who are destructing our country, shame on you bitch! You’re lucky I didn’t slash your damn tires!!

I’m all about dissension and critical thinking regarding military action. It keeps the government accountable and saves the lives of U.S. service members. But this letter is filled with conspiracy-ridden rhetoric written by someone who thinks it’s justifiable to leave hate mail on strangers’ vehicles. To completely shame the U.S. military, and the service members who comprise it, in an anonymous note is cowardly, especially when all Wilson did was display a bumper sticker professing love for her significant other.

The most effective way to counter uninformed bullshit like this is to encourage greater dialogue between service members and civilians, reaffirm the strength and honor of the U.S. military, and deny credibility to individuals who maintain such a warped perspective.

Because in the immortal words of 3LW, haters gonna hate.