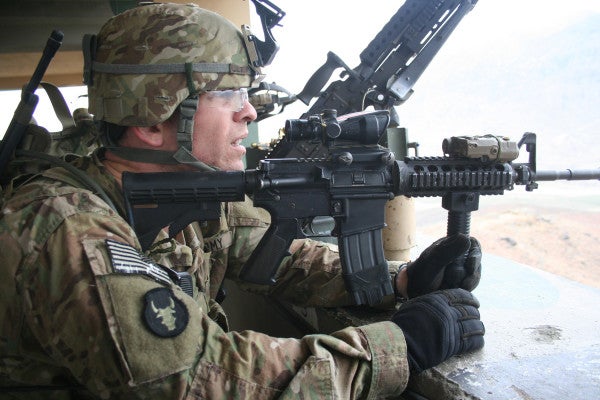 The chain of events motivating Taylor Gingrich to join the military began when his brother Garrett, an infantry officer in the Iowa National Guard, returned from a deployment in Egypt in February 2004. “I knew he would be deploying to Iraq soon, so I joined the military to be able to deploy with him,” said Taylor.

Taylor, a native of Dysart, Iowa, enlisted in the National Guard as a medic and deployed to Iraq from 2005 to 2007. He became an infantry officer like his brother in time for his second combat tour in Afghanistan from 2010 to 2011.

“Both deployments were hard,” said Gingrich, “whether it was fighting off IEDs in Iraq or IEDs and small arms fire in Afghanistan. But I was able to serve with my brother, and we were engaged in operations against the enemy about 15 miles apart at one point.”

Garrett was a commander of one company while Taylor was a platoon leader in another, both in the 1st Battalion, 133rd Infantry Regiment, of the 34th Infantry “Red Bulls” Division.

“The transition after the second deployment was difficult because it had been so long,” said Gingrich. According to the National Guard Bureau, the 34th Infantry Division from Minnesota and Iowa endured one of the longest deployments of a National Guard unit since World War II.

“When I returned, I wanted more education so I finished a second degree,” said Gingrich. He now holds bachelor degrees in organizational studies and business administration. “After that I realized I had to move to find work, so my wife and I moved to Minneapolis. That also proved to be incredibly difficult,” he said.

“A huge hurdle was my resume. It only had my civilian education and military experience,” said Gingrich. “It was hard to portray my military skills so they could be understood by the civilian sector.” He spent eight months searching for work with no success.

“Then I realized I already had the qualities civilian employers are looking for, like teamwork, organization and discipline,” he said. “I had to focus on equating these to civilian skills.”

At the same time, Gingrich, now 31 and living in Richfield, Minnesota, kept his part-time job as a soldier in the Iowa National Guard where he is the executive officer of Headquarters Company, 1st Battalion, 133rd Infantry Regiment.

There he worked with one of the coordinators and was able to network right away with leads that worked for him. “One of the things I now tell my soldiers as I now assist them through the process is when you are in an interview, it is a two way street,” said Gingrich. “You are evaluating the company at the same time they are looking at you, deciding if you are compatible. That is key.”

Moving on to a civilian job

Gingrich connected with a company called Strategic Source in Bloomington, Minnesota, that hires a lot of military veterans. “They are patriots,” said Gingrich. “They support vets and share my values of service and dedication.”

Strategic Source provides a service to companies and organizations to help them control costs and reduce risks of supplier management, said company president Doug Austin, a Marine veteran. “Taylor has discipline and a positive attitude and helps develop the team,” he added. “I would like to hire more like him.”

Austin is proud that 43% of his staff is former military. He said it is not always easy to find the skill sets that veterans possess among the civilian job-seeker pool.

Advice for the next generation of American veterans

For Gingrich, the key was to focus. “I had to find my focus after returning from deployment,” he said. “Decide what you want to do, then work as hard as you can toward achieving that goal.”

“I wasted a lot of time wandering aimlessly,” Gingrich said, “looking for random position after position. I got traction when I found what I wanted to do and then began moving towards that goal.”