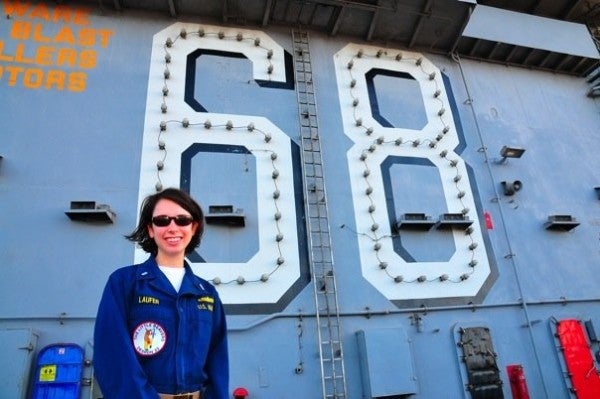 Molly Laufer is a surface warfare officer veteran who served four years in the Navy before transitioning to the civilian workforce in 2011. She now works for a direct-to-consumer snack company called NatureBox, which launched in January 2012. NatureBox’s mission is to provide easier access to healthier eating by delivering nutritious snacks directly to its members’ doors.

As senior manager of digital marketing at NatureBox, Laufer is responsible for driving new visitors to the company’s website and customer acquisition through a wide range of on and offline marketing channels. However, being the first full-time employee when NatureBox first launched meant that she had to constantly change hats in order to grow the business.

These days, she brainstorms, forecasts, plans, and executes campaigns across a variety of digital channels to increase the company’s growing customer base.

On her path to the military

It was always Laufer’s dream to attend the University of Virginia. As high school graduation approached, her father encouraged her to apply for a Naval Reserve Officer Training Corps scholarship so she could serve her country and develop leadership skills while receiving a liberal arts education. At UVA, Laufer pursued a degree in foreign affairs and Russian studies, a fairly non-traditional degree choice for most military officers.

“The skills I learned through this interdisciplinary program were instrumental for success both in the Navy and in my civilian job,” Laufer said, who graduated from UVA in 2007 and was commissioned as an ensign in the Navy. “Being able to think critically, effectively communicate, both written and verbally, and being able to look at the big picture are skills that I really took from my education that I use on a daily basis in my job.”

On her most pivotal experience while serving

Laufer said that her four years in the Navy gave her the confidence she needed when transitioning to “approach problems creatively, manage multiple projects, and really buckle down, roll up my sleeves, and get the job done.”

She described one of her most pivotal experiences being the 27 months she served as a division officer on the USS Samuel B. Roberts (FFG-58). “On a small ship like a frigate … most junior officers wear many hats on a day to day basis,” Laufer said. “Between collateral duties, training teams, divisions, watch standing, and qualifications, the ability to juggle and balance priorities and lead teams really shaped me during these few years.”

Laufer left the three service three years ago and took six months off to travel and move to San Francisco before taking a job with NatureBox. She said that it took a long time before she fully understood the lessons she gleaned from the military, however, one of the most important takeaways she learned was a “new and profound appreciation for our way of life here in the U.S. and the impact and opportunity that we have as U.S. citizens and members of the military.”

Laufer also said the ability she learned as a surface warfare officer to manage up and down the chain of command translated very well in the civilian workforce. While civilian organizations might not be as structured as a military chain of command on a Navy ship, utilizing this skill to anticipate the questions and concerns of her bosses prepared her to be an effective and multi-faceted employee at NatureBox.

Laufer offered up three valuable pieces of advice for service members transitioning out of the military. The first applies not just to the work force, but also to living a successful life. “Take a risk – this is the time for you to try something new, move to a new location, pick up a new skill, explore your passions,” Laufer said. “If I had done what my peers were doing or what a headhunter wanted me to do, I would likely be working in a role at a company that looked more like what I was doing in the service and less like where I am today.”

Laufer also advised figuring out what you love and are passionate about and get a general idea of how you want to incorporate that passion in your career. “Your ‘mission statement’ may change as you do more searching (both of the soul and job variety), but it will help frame your discussions when you network and put yourself out there.”

Finally, when you receive an offer, make sure to negotiate with the company to give yourself the best deal possible. “Everything is up for discussion in most civilian jobs — you’re no longer one in a year group or rank of many, waiting for the next promotion or salary raise or title according to a government pay scale,” she said.