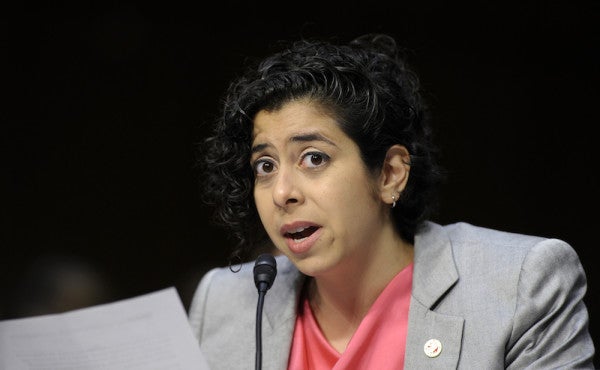 Anu Bhagwati is a fearless advocate for women in the military. A former Marine captain and company commander, the 39-year-old is the founding director of the nonprofit organization, Service Women’s Action Network, which aims to foster and support change for servicewomen and veterans through policy reform, media advocacy, litigation, and community organizing. An individual punished for her defense of the treatment of female service members while she was in the military, Bhagwati is now a champion of social justice within the armed forces. Where did she get the fearlessness she possesses to take on such systemic military issues? Perhaps ironically, from the military itself.

Bhagwati recently spoke with Task & Purpose to discuss her path to where she is today, and what advice she has for the veterans who follow her.

On her time in the Marine Corps

Bhagwati joined the Corps in 1999 after finishing her undergraduate degree because she wanted to do something completely different and extreme that was not expected of her from her family and culture. “I was really intrigued by the physicality and the hardcoreness of the military. … I realized the Marine Corps was the thing that most closely fulfilled my needs at that point,” she explains.

She describes her service as extremely challenging for a variety of reasons. “I loved the physicality, the larger-than-life intensity, the team-building, the mentorship and training I gave to younger Marines, the mentorship I got from senior enlisted Marines, and generally proving men wrong about my capabilities as a Marine leader and athlete,” Bhagwati says.

Bhagwati thrived in the Marine Corps, developing leadership skills that empowered her to command 450 Marines in her twenties. “Marines take no bullshit from anyone, so learning curves came fast to me,” she says. It also prepared her to take on new challenges without fear. In 2002, Bhagwati volunteered to serve at the School of Infantry at Camp Lejeune, North Carolina, training new Marines in combat skills and commanding infantry troops. According to a Washington Post op-ed Bhagwati wrote in 2013, it was a billet few non-infantry officers had attempted, and she was the only woman in her position. She welcomed the challenge.

However, this experience wasn’t kind to her. At Lejeune, Bhagwati faced overt discrimination and harassment and also watched as her trainees made allegations of sexual harassment against an executive officer that were ignored. “I tried to change it from the inside, which was risky and very harmful,” Bhagwati says. She ultimately separated from the military in 2004, devastated by a system that perpetuated misogyny and left her ostracized from a job she had hoped to turn into a lifetime career.

In the long run; however, Bhagwati believes the pain and betrayal was worth it: “I wouldn’t have been able to start this organization or do this life-changing work without the experiences I had in the Marines, both good and bad.”

Two weeks after Bhagwati separated from the Corps, she started a master’s degree in public policy at the Kennedy School of Government at Harvard University, where she focused on international security issues and human rights. The degree gave her a strong sense of how government works from the perspective of multiple agencies. In 2009, a rigorously analytical mind and a compassion for those who are “hurt or missing at the table” ultimately drove Bhagwati to become the first executive director of the Service Women’s Action Network, or SWAN, setting up the organization in New York City with another veteran.

Five years later, Bhagwati is now responsible for fundraising, public speaking, developing policy, litigation, and media campaigns, and communicating messaging to stakeholders, including major media outlets. In that short period, SWAN has made significant strides breaking down long-held barriers to servicewomen’s rights in the military.

Two of SWAN’s achievements that Bhagwati is most proud of are helping to repeal the combat exclusion policy, which was lifted by then-Secretary of Defense Leon Panetta in January 2013, and making the topic of military sexual assault and harassment a nationwide conversation that has engaged both military and congressional leadership. “It’s worth it when you realize just how much DoD and VA policy we’ve changed in the last several years,” says Bhagwati. “The impact is fast, direct, and felt immediately by every new class of recruits, cadets or officer candidates being trained as we speak.”

While gender equality policy and culture still have a long way to go before women are treated as equal in the military, Bhagwati says one of the privileges of this job is that many of the people who made the lives of servicewomen “a living hell” are now answering for their actions. “It hasn’t come easy at all, but the brass can’t ignore us now even if they want to,” she says. “That’s one of the impacts of successfully using the tools we use to make change, like litigation and media.”

When it comes time to transition out of the military, Bhagwati advocates for thinking outside of the box and pursuing things that make you joyful. Additionally, she says, “Take your time. You’re probably processing experiences that can’t be processed overnight. So be gentle with yourselves.”

For those who aspire to influence change, she says, “Don’t expect to be loved! You will see the absolute best and absolute worst of the human species.” However, you will find that helping veterans and service members, or contributing to any cause that you have a passion for, is incredibly rewarding.