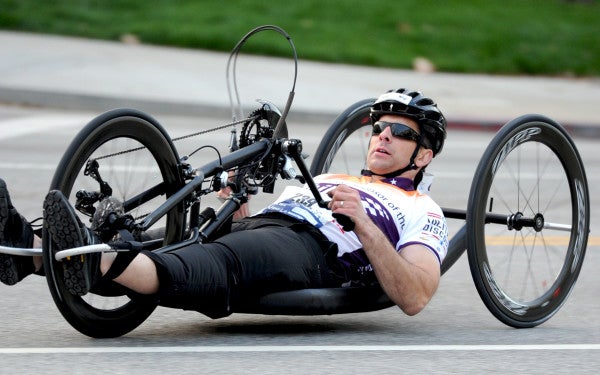 Thirty-year-old Derek Herrera has had a busy two years. Even though he is still an active-duty captain in Marine Special Operations Command, he recently became CEO of RuckPack Inc., a company that manufactures and sells healthy alternatives to energy drinks and shots, and enrolled in an MBA program at UCLA’s Anderson School of Management, where he is studying entrepreneurship and marketing.

He has also spent the last two years relearning how to walk.

In 2012, Herrera was left paralyzed from the chest down after being hit by a sniper while leading a special operations team in Helmand River Valley in Afghanistan. With help from the MARSOC Foundation, as well as friends and family, Herrera was able to obtain a ReWalk Robotics ExoSkeleton that, with help, allows him to stand, walk, and sit (Check out Herrera’s website for videos of him using the device) through motorized leg braces, a backpack that contains a battery-run computer, a wrist-mounted controller, and crutches.

While there are great benefits to being able to walk again, even at a slow pace, Herrera says the biggest benefits are psychological, not physical. “More than anything, I am excited and hopeful for the future, which is significant because a lot of times, for people with these sorts of injuries who are paralyzed, they are left with a feeling of helplessness,” he explains. In Herrera’s case, he wakes up feeling inspired every day about where the technology is going to go in the next five-to-ten years.

Even though Herrera’s military experience left him with a life-altering injury, he still describes his service as one of the best experiences of his life. “I have thoroughly enjoyed my time in the infantry and special operations because of the brotherhood and teamwork displayed by the units I have been lucky enough to serve with,” he says.

Herrera received his bachelor’s degree in systems engineering from the U.S. Naval Academy in 2006 and was shortly then commissioned as a Marine officer. He deployed to Afghanistan in 2012 and was wounded in combat in June of that year. After being medically evacuated off of the battlefield, Herrera spent two months in in-patient recovery, and then transitioned to out-patient rehab after that. Within six months, he was back to work as a staff officer with his battalion. Herrera’s medical board cleared him to remain on active duty and he extended his service another year. He plans to medically retire from the military next month.

On going back to school

Prior to his injury, Herrera never considered a career outside the military. It wasn’t until that Herrera started to think about how he could translate the skills he had learned in the Marine Corps into smart business skills. He decided to pursue an MBA with a focus on entrepreneurship because it was a field that he had limited exposure to, but thought he would thrive in thanks to the leadership and management skills he had developed in the military. He set a five-year goal for himself: Start and run his own business or take over and run a successful business.

“My education has provided a solid foundation for all of the pursuits I have had in my career to date,” Herrera says.

Meeting his career goals as a new CEO

Even before completing his degree, Herrera became the CEO of RuckPack after pairing up with the founders of the company, who are also Marine Corps special operations officers. He started as a consultant, helping RuckPack with its marketing and advertising plan, and when the company decided it wanted to bring in some new leadership, the founders asked Herrera to apply for the job.

“The more I learned about it, the more I realized that this was what I wanted to be doing and the opportunity that I was looking for,” Herrera says on deciding to take the job this past August.

According to Herrera, RuckPack is based on the same qualities of service, humility, and duty that are taught in the military. “We believe in empowering people to achieve their peak performance nutritionally. As special operations officers, we are required to do things that require are incredible feats of strength and drive and mental resolve and that is how this product was born,” Herrera says. “We can easily represent a product that we all believe in.”

Ten percent of all RuckPack’s profits benefit military charities, according to the company’s website.

Aftering transitioning out of the military, things will never be the same, says Herrera. “You will not feel the same way you did when you deployed as a team to a combat zone, but that is okay.”

Herrera recommends that transitioning service members seek out civilian professions and careers that offer the same level of meaning and purpose that is available in the military.

“Once you identify this passion, pursue it with the same vigor that you put forth during your time in the service, because it will lead you a life that is meaningful and fulfilling to you,” he says.

For service members recovering from combat-related injuries, Herrera encourages them to stay positive and find goals to focus on:

“I wake every day and think about how I am going to make my business successful and all the work that needs to be done to accomplish this new mission that I have. That is big.”