For 31-year-old Marine veteran Derek Herrera, the decision to start his own company in June was motivated by a desire... 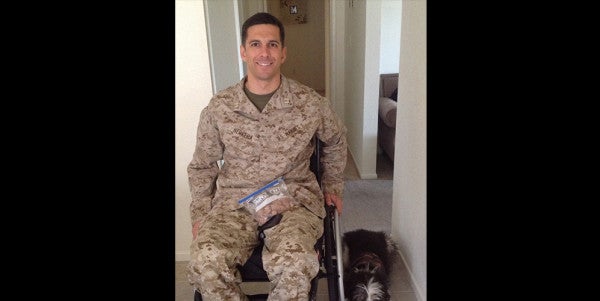 For 31-year-old Marine veteran Derek Herrera, the decision to start his own company in June was motivated by a desire to see scientific advancement put to practical use. The company, called Spinal Singularity Inc., is a medical engineering firm that designs medical devices to improve quality of life for people, like Herrera, who are paralyzed due to spinal cord injuries or disease.

Herrera was shot in 2012, while serving as an active-duty captain with a Marine Special Operations Command team in Afghanistan. Though still paralyzed from the chest down, Herrera spent the next two years relearning how to walk with the help of an ExoSkeleton, which he wore to receive the Bronze Star medal for valor during his retirement ceremony in November 2014.

As Herrera began his rehabilitation process, he says he initially placed a lot of stock and faith in academia, because he felt that universities and research centers were the mostly likely place for innovative technology to emerge.

However, Herrera came to realize that the medical and scientific fields were often more focused on advancements in science rather than advancements in a person’s quality of life. As he made his way through the rehabilitation process, Herrera took stock of the challenges he faced, seeing not just obstacles, but opportunities for improvement.

Which explains Herrera’s decision to go into business for himself. It was a way to improve not just his customer’s quality of life, but also his own.

Herrera chose to focus on neurogenic bladder, which is the inability to sense the fullness of one's bladder and control it, because there is little innovation related to this problem, even though it poses a daily challenge for those dealing with it.

A standard catheter is little more than a tube and a nozzle that must be inserted into the urethra five to 10 times a day. By contrast, the Connected Catheter can stay in the body and allows a user to empty his or her bladder with relative ease. It can also tell a patient or clinician when a user’s bladder is full by wirelessly relaying pressure data to an external device.

“I saw firsthand what some of these problems were and how they affected my quality of life,” said Herrera on why he founded Spinal Singularity. “I’m designing a product for myself, but on the same token there are millions of people who will benefit from this program too.”

Herrera hopes to have the first prototype completed by the end of this month.

Watch Spinal Singularity’s awareness video or visit the crowdfunding page to learn how you can support Derek’s efforts.