There’s a million ways to break a vase. You can smash it with a sledge hammer. You can throw it... 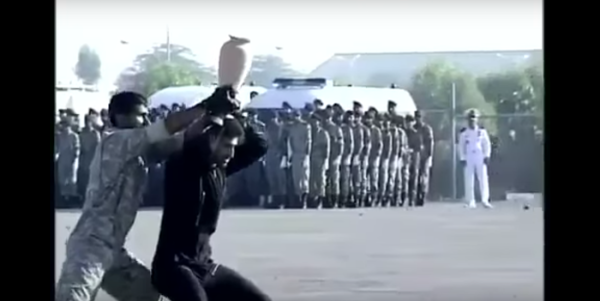 The Iranian military seems to favor the last option.

In a video that began circulating online in late December, members of the Iranian military, whom a number of Arabic blogs and websites have identified as special forces commandos, take turns karate kicking a vase for the viewing pleasure of their superiors. But things don’t go according to plan. In fact, they go terribly wrong.

In one attempt after another, the commandos fail to destroy their inanimate adversary. One especially motivated trooper even tries to smash it to bits with a spinning backhand punch. However, the vase remains stubbornly intact.

As the embarrassing display of physical inadequacy unfolds, the camera turns to the military commanders, who appear stricken with disappointment. Then, when it becomes clear that the vase is too tenacious for its elite assailants, the ceremony is abruptly concluded. The shamefaced soldiers take a bow.

Meanwhile, at the soldiers’ feet, the vase stands tall. Proud. Defiant. I’m reminded of Russell Crowe in “Gladiator.” The vase didn’t ask for this life, but here he (or she) is, an unlikely champion in a deadly game that was never meant to turn out his way. Grab the popcorn and see for yourself: