If you're reading this, chances are I don't need to tell you how crappy a military job can be sometimes.... 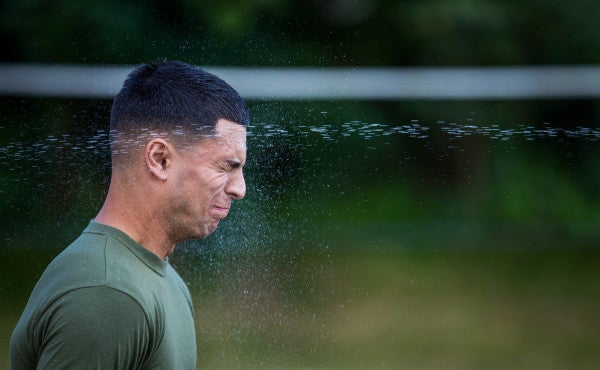 If you're reading this, chances are I don't need to tell you how crappy a military job can be sometimes. I consider myself lucky that the overall crap level I experienced was relatively low during my years in uniform. Still, I endured many moments of boredom and frustration that I grumbled and groaned my way through, all while doing my job as best I could. Because that's what Marines do. I mean, what other option did I have? Quit? Not so much. So I trained hard to suck it up, pushed through, and got things done.

Two years ago, shortly after I returned to the civilian world and the facial hair had returned to my face, I was hired by a large, prestigious advertising agency. If you're thinking, “Oooh, Mad Men! Fine suits and busty redheaded secretaries and aged scotch!” just know now that you're wrong, so very wrong — As was I. Starting my job with a degree in film and television, as well as years of advertising experience working for my father's production company, I pictured a world of good money, creative work, and office parties with lots of beer and actresses. Sure, my dream was to be a writer, but I figured this was a good place to start.

I immediately faced the same problems many veterans find when they get a civilian job. The people who hired me were impressed with my experience, but had no idea how to apply it to putting me to work (of the 900-plus employees at the New York office, I was one of two vets). They nodded politely while listening to me talk about directing artillery fire for a battalion and then asked me earnestly if I was ready to handle the all-important task of forwarding an email from the executive producer to the editor about a tampon commercial. The disconnect between respect for my experiences and the idea that, since I was a junior employee, I was unprepared to handle any responsibility drove me up a wall on an hourly basis.

For the first six months, I grinned and bore it. After all, I figured, I was new to the company. I had to expect a bit of time at the bottom messing around with Excel spreadsheets and photocopying receipts for other people's “client dinners” consisting of several hundred dollars worth of top-shelf vodka. But as months went by, I began to realize that there was no light at the end of the tunnel. The people in positions above me were just as miserable, only passing their busywork off to me so they could spend all day (and, in most cases, night) running back and forth from panicked conference calls to terrified meetings because the client didn't like the color of the shirt on the guy holding the razor in the last shot and if it wasn't fixed, everybody would be fired.

But I stuck it out because it was my job. What was I going to do, quit? Of course I could have quit, and I should have. I was miserable. But I just couldn't bring myself to do it. Because that's not what we do in the military. We suck it up and get stuff done. I wound up staying there for 18 months, growing more disgruntled every day until I couldn't hide it anymore. I came to work furious and snarky, spoke less and less to my coworkers, and took long “rage walks” at lunch. At last, they fired me.

Related: The most productive way to bounce back after losing your job.

I walked out of the building that day and practically skipped home, grinning like a moron the whole way. I wished I had quit a year earlier, when I first realized that the people I worked for would never understand that they were wasting my experience, and more importantly, that I was wasting my time in a job I didn't want.

Since then, I decided to pursue my passion and have made serious progress with my writing, to the point where I am actually starting to get paid for it. Working freelance, I already make more that I did at the agency with better hours, minimal irritation, and frequently from my couch in my underpants (otherwise known as The American Dream).

Service members are typically very good at recognizing bullshit, but we are trained to slog through and not give up. And when the uniform comes off, it's all too easy to get stuck in that mentality. I'm not saying work after service should be easy and carefree. Our ability to push through the hardest times is a great strength that we should always take pride in and use when needed. But, take it from a reformed miserable employee: When you transition into the civilian world, you have options. Take the time figure what field you want to work in as well as what work environment will make you happy.