JOB ENVY: The Army Vet Trying To Change Where People Get Their Socks 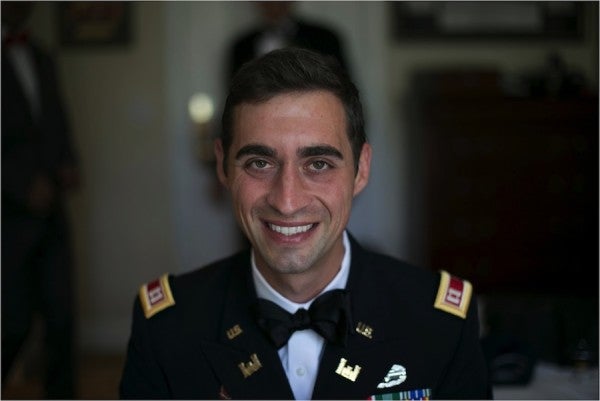 Texas native Mario Barrett is working hard to support veterans, but not in the way you might expect. His occupational specialty? Socks.

The 31-year-old runs the day-to-day operations for Sockwork, whose motto is “Socks With A Purpose.” Sockwork is a monthly sock subscription that Barrett and his wife started in February 2014 as a way to start a business and donate back to charities that support veteran causes. They devote their time to communicating with non-profits, handling customer service and packing socks for delivery.

What he learned from his time in the Army

Barrett separated from the Army in 2012 after five years working as an engineer officer. As a 2007 West Point graduate, he says his time in the military gave him the opportunity to lead some of the best men and women he has ever met. “Every soldier I had the pleasure of working with taught me something new. I’ve taken all of these lessons with me today to help shape the person I’ve become,” Barrett tells Task & Purpose.

Barrett also says he left the military with two key lessons that he still applies to his daily life. First, treat everyone with respect. Speaking down to others is not constructive or good business. Second, never take no for an answer. “My first commander taught me that when somebody tells you something cannot be done or is not possible, figure it out and show them how to do it,” says Barrett.

How his education has contributed to his career

For Barrett, the Army was a great place to receive 360-degree feedback on decision making and leadership. When he separated in September 2012, he went on to pursue his MBA at the McCombs School of Business at The University of Texas.

Before he left the Army, Barrett had no idea what the civilian job market looked like. Finance, consulting, marketing, entrepreneurship, Silicon Valley, they were all just buzzwords he heard on the news.

It wasn’t until business school that Barrett discovered what these buzzwords really stood for and really learned what the other side of the world looked like. “My eyes were opened to the world of entrepreneurship,” explains Barrett. “Before, I would’ve wondered how anyone started a business. Now, I know that you just have to go do it, be willing to hustle along the way, fail fast, and then start over.”

How one pivotal moment changed his life

A moment that changed Barrett’s life took place during a career fair at business school. While speaking with a local recruiter about how he could help veterans who are transitioning, the recruiter asked, “What are you going to do about it?” Her question stuck with Barrett for an entire year as he thought about what he could do to make an impact. That’s when Sockwork: Socks With A Purpose was born.

“We saw firsthand how resource-consuming fundraising is for non-profits and we wanted to help,” explains Barrett, referring to himself and his wife. “At Sockwork, we sponsor a different veteran charity each month and donate 10% of profits to it.”

During Sockwork’s first year, the company is sponsoring four different non-profits and is on track to donate over $5,000. While Barrett admits the donation is a small amount, he hopes it will encourage other veteran-owned businesses to adopt a similar model.

“Prepare and ask for help!”

One of the biggest problems that Barrett sees veterans facing is that they are so focused on the military when they are in, they often don’t know what the outside world looks like and what opportunities are available.

“Transitioning can be overwhelming at times, so use social media to reach out to other veterans who work in a specific industry and ask them for a few minutes of their time to tell you about their experiences,” Barrett advises. “If you wouldn’t go to a promotion board or school without preparing, don’t go into a transition without preparing.”