How To Know When A Company Is Truly ‘Military-Friendly’

“Military-Friendly” is a badge of honor you see thrown around a lot these days. From awards in magazines and newspapers,... 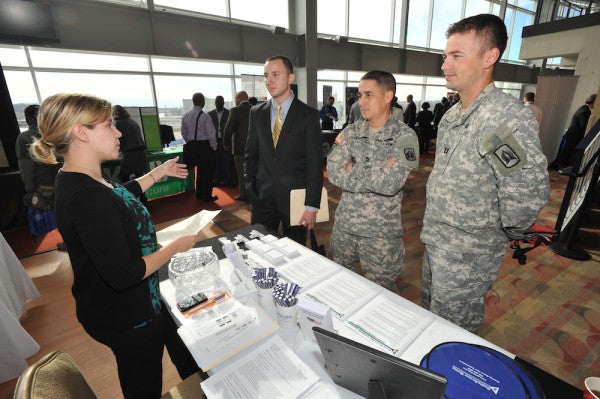 “Military-Friendly” is a badge of honor you see thrown around a lot these days. From awards in magazines and newspapers, to marketing campaigns and job fairs, every company claims to be a military supporter. But what the heck does “military-friendly” really mean? Too often, it's a military discount, free appetizer, or promise to hire a wildly large number of veterans that gets companies recognized, instead of meaningful efforts to impact our community and hire and retain veteran talent.

In April 2014, Greg Jaffe at the Washington Post estimated that companies had pledged a million jobs for the then 210,000 unemployed post-9/11 veterans. If there were five jobs for every unemployed vet, why are there any unemployed veterans at all? Because supporting veterans means doing more than pledging to hire us.

Here are five ways you can really tell if a company truly has veterans and military families as a priority.

1. They have a veterans affinity group.

It’s one thing to hire veterans and military spouses, it’s an entirely different thing to ensure they transition smoothly, integrate into the company, and succeed once they are in the building. Many of the top companies in the country that are serious about hiring from our community have employee affinity groups that mentor new hires, participate in the military community, and make sure veteran and military family hires feel like they have a community—something many miss after leaving the service.

2. They give to veterans non-profits in an impactful way.

It used to be that companies would buy a table at a gala or present a big damn cardboard check and that was their idea of “giving” to our community. While both initiatives are still hugely important to many non-profit organizations, companies that are truly “military-friendly” are doing much more. Look beyond the long press releases and media blitzes and find out where they are investing in our community. Do they support groups that you belong to? Groups that are making a difference, even if they aren’t that well known? Some companies will match employee donations and allow you to volunteer on company time. Cardboard checks are important, but look deeper and you’ll find the companies that support the same causes you do. Besides, if you’ve ever tried to fit a big damn cardboard check in a deposit envelope you know how much of a pain it is.

3. They are quiet professionals.

Some of the most “military-friendly” companies we know won’t appear on any end of year lists or in a special issue of a magazine. They just are quietly hiring, integrating, and promoting veterans in their ranks. At these companies, you’ll find military spouses running major departments, or when a young veteran gets hired as a seasonal employee, he is running the entire department four months later. These companies won’t brag, you need to ask them how many veterans are in the company and if there are any senior leaders with a military background. We’ve seen companies that won’t participate in the big hiring campaigns because they already hire more veterans than the pledge demands so there is no point. It might be harder to find them, but if you are serious about finding a job you should be checking under the hood of the company anyway.

4. Your friends, combat buddies, or their spouses work there.

It’s the simplest thing really. Do you know somebody who works there? If a company is military-friendly, you should be able to find some veterans or military spouses to chat with about it. Some of the most military friendly companies are hiring from our community in big ways, which means you’ll find someone you know within a couple of degrees of separation.

5. They are advocates for a cause.

Just like individuals, companies that really care about something take a position and do things to make a difference. Whether it’s veteran homelessness, mental health issues, unemployment, financial burdens, skills gaps, support for veteran-owned businesses, or a host of other issues that impact our community, caring companies take a stand and put their money and efforts down to fix it. If the CEO is out there banging on a podium about veteran homelessness, you are seeing what matters to a company and whether it's the kind of company where you can see yourself working.

We in the the military community need to look deeper before we call a company military-friendly. Is it really that 10% discount on your $1 bottle of water or is it the 40,000 veterans that work for the company worldwide that matter to us? It means a lot that companies are willing to take a hit on their bottom line for the military community, and we need to constantly thank them for those efforts, but look beyond the superficial and make sure it's a place you can be happy for many years. Not offering a military discount doesn’t mean a company is anti-military any more than offering one means they truly support veterans.