JOB ENVY: The Army Officer Who Gets Deployed Troops Gaming 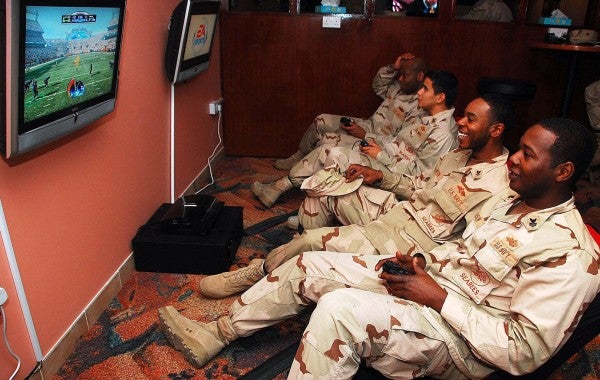 For service members deployed overseas, it’s often the little things that make the

most difference. While serving in Iraq in 2003 as an infantry officer in the Army, Stephen Machuga realized many of the care packages being sent to deployed troops were well-meaning, but never had what troops wanted or needed. Care packages missed a reality of 21st century technology — troops can play video games in war zones. After he left the service in 2006, Machuga decided to reach to the gaming community to try and change that.

Operation Supply Drop was born, a military charity that assembles care packages of

personnel in military hospitals. Since the charity’s founding in 2010, they’ve

raised 1.6 million dollars’ worth of games and accessories to be sent to

Machuga spoke with Task & Purpose to describe his current work and his transition from military service.

Machuga describes himself as an unremarkable infantry officer.

“I was the enlisted man’s officer; my guys loved me because I talked video games

with them and couldn’t care less about which colonels were getting promoted,” he said.

A Ranger School graduate, Machuga says he’s happy he got to experience the military as an infantryman. “: I’m so happy I was infantry. I got the full “MILITARY” experience, versus being a combat service support branch that boxes widgets or files paperwork.”

The genesis of Operation Supply Drop

After leaving the Army in 2006, Machunga moved to Washington, D.C. to work as a government contractor doing analytical work. The idea for the charity came from an exchange he had with one of his former subordinates:

“[One of my soldiers] in Iraq re-enlisted after he got out and was immediately sent over to Afghanistan. When he got there, he knew because of my love of video games that I had friends in the gaming industry and wanted to see if we could get someone to send them some video games,” he said. “I reached out to some contacts and they delivered in spades with boxes and boxes of Guitar Hero bundles. Of course, word got out that some crazy guy was sending thousands of dollars of video games to deployed troopers, and thus started the charity.”

His unique role in the military charity space

Machuga said he isn’t aware of any other charities with a military gamers bent. While building Operation Supply Drop has been a challenge, it’s what he enjoys the most about his career.

“You know how they say that if you love your job, you’ll never work a day in your life? Well, that’s partially true,” he said. “I’ve never worked harder in my entire life, up all hours of the night answering emails, requesting donations, building alliances, but it’s all so much fun to watch this charity keep getting bigger and reach a tipping point. People are taking note. It’s exciting.”

On the ones carrying the torch in the military now

Machuga has nothing but respect for his brothers and sisters serving today. And the capabilities of the modern military surprise him, he said. He has no doubt that current troops can handle the threats America faces today.

“I can’t get out there and go kick ISIS in the junk,” he said, “but I’ve been shot at for a living, so I can definitely appreciate those kids who are still out there picking up the guidon where I put it down.

“I still marvel at the fact that I was in at times; the kids nowadays feel like superheroes to me.”