In 2007, Kyle Christopher Barwan enlisted in the Army National Guard. Less than 180 days later, he was discharged, apparently... 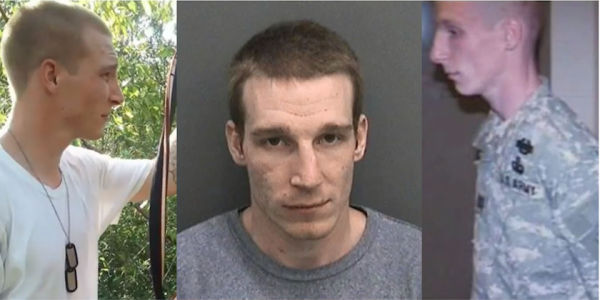 In 2007, Kyle Christopher Barwan enlisted in the Army National Guard. Less than 180 days later, he was discharged, apparently after having failed to meet medical procurement standards. But that hasn’t stopped Barwan, who was arrested in on Jan. 25 for impersonating a member of the military for the purpose of material gain, from attempting to reap the benefits of honorable service. Not once. Not twice. But no fewer than three times.

Barwan, 27, is a serial stolen valorist. A quick Google search confirms that I made that term up, but I can’t think of any other way to describe him.

Barwan has been on the radar of the Stolen Valor watchdogs for quite some time. In 2010, his name appeared multiple times on the military blog This Ain’t Hell after various photos of him in bizarre uniform configurations began surfacing on the site. (You can read the thread here.) That year, Barwan was arrested in Indiana and charged with impersonating an officer and possession of cocaine.

Barwan was sentenced to a total of 30 months in jail for the 2010 incident, but apparently that wasn’t punishment enough.

Barwan’s most insidious act to date may have occurred in 2012, when he was arrested in Kentucky and subsequently sentenced to 16 more months in prison after he defrauded someone of more than $1,000 and also, as the United States Department of Justice website puts it, “falsely assumed and pretended to be…a United States Army Chief Warrant Officer, and in such pretended character … conducted a military promotion ceremony for military personnel.”

Holy shit, right? Now, fast-forward to two days ago, when Barwan, who at some point along the way apparently assumed the nom de guerre “Kyle Reacher,” found himself in handcuffs again, this time for doing what he does best: playing pretend. His victim was a Florida woman named Katie Brees, whom he met on the dating website Plenty of Fish while posing as a major in the Army Special Forces recently returned from a five-year deployment.

Related: Is this stolen valor? >>

Brees, the granddaughter of a Korean War veteran, told detectives that she gave Barwan $60 to pay for a video game controller he told her would be used in a video game tournament to benefit a fallen soldier. He also joined her family to celebrate Christmas Eve. That night, she recalled, his phone rang and the number came up either as “U.S. Military” or “U.S. Government.” Great news! He had just been promoted to captain. From major.

Sensing something was off, Brees Googled Barwan’s name and found the This Ain’t Hell thread. And that’s the story of how Kyle Christopher Barwan, serial stolen valorist, landed in jail again.

“I thought meeting somebody with a military background would be a good thing,” Brees told a local Fox News affiliate. Adding, “He even got my 83-year-old grandfather to semi-believe him. And to a person that was actually in the military that’s hurtful.”