When 16-year-old Alyssa Elkins of Morgan County, Ohio, was recently diagnosed with leukemia for a second time, she decided to... 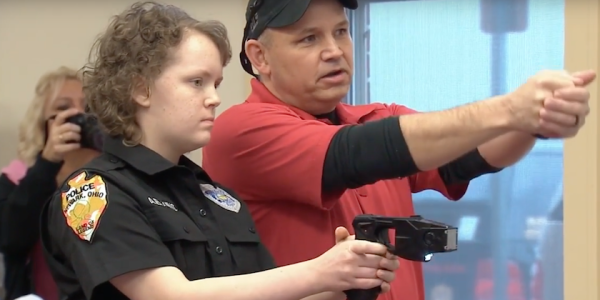 When 16-year-old Alyssa Elkins of Morgan County, Ohio, was recently diagnosed with leukemia for a second time, she decided to forgo treatment. Instead, she chose to spend the remainder of her life enjoying time with her family. So, she came up with a bucket list.

Petting a miniature pig was one item on Elkins’ list. And so was shopping for a wedding dress with her mother, sending a bottle with a message in it across the ocean, visiting Disney World, and also, because Elkins is the hero America needs right now, shooting people with a Taser.

As The Columbus Dispatch reports, Elkins got the idea from watching a video of her uncle, a State Highway Patrol troop, getting hit with a Taser in training. She thought it was funny. Her family, determined to do everything they can to keep Elkins’ mind off her illness, decided to make it happen.

“I’ll do anything for my niece,” Josh Barry, the trooper, said.

A few days ago, Elkins and her family — she has eight siblings — arrived at the Newark Police Department, where two civilian employees and six officers were waiting. All had volunteered to be on the receiving end of Elkin’s Taser.

“She’d never hurt anyone,” Elkins mother told The Dispatch. “My other daughter wasn’t even sure Alyssa could push the button, that she’d be too afraid to hurt somebody.”

Elkins took aim at her first target, Sgt. Doug Bline, who acknowledged that, yes, getting momentarily paralyzed by a powerful electric jolt is painful, but, in this case, totally worth it. The crowd gathered for the occasion shouted “Taser! Taser! Taser!” Elkins pulled the trigger and Bline crumpled to the floor. Then her next target stepped onto the mat. It was her uncle.

“I’m never doing this again,” Elkins said after shooting her uncle. “I had the experience.”

Elkins, who endured four months of treatment for leukemia in 2015, has anywhere from a month to six months to live, her mother said. The thought of someone having to face death at such a young age is almost unbearable to consider, but Elkins doesn’t see it that way.

“God loves everybody and he’s for us and not against us,” she told The Dispatch. “He puts us through trials. In the end, I’m not really scared. If he takes me, I know where I’m going.”