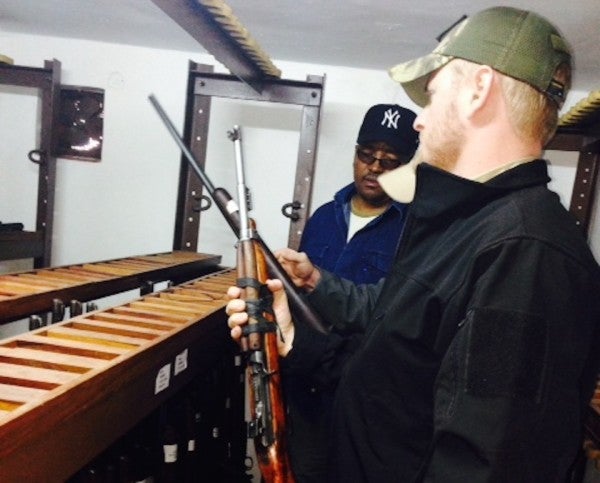 When Marine veteran Ryan Tate sat down one night to watch a documentary about the Tusk Trust Foundation, he didn’t know what a profound impact the film would have on his life. As an animal lover, the 29-year-old normally shielded his eyes from animal abuse, but when he saw a rhino stumbling to stay on his feet and struggling to stay alive with half of his face missing, he felt like someone had punched him in the gut. It was that moment he knew he was going to do something about it.

Tate is now the president and founder of Veterans Empowered to Protect African Wildlife, or VETPAW, a nonprofit organization that employs military veterans to train and support Tanzanian anti-poaching efforts in collaboration with African nations and organizations.

Ryan Tate is the founder and president of the nonprofit Veterans Empowered to Protect African Wildlife.

Tate joined the Marine Corps in 2001 with delayed entry, entering boot camp in 2003. He describes his military service of the most incredible experience of his life. “I had the opportunity to see some of the most ugly and most beautiful places the earth has to offer,” says Tate, who served one tour in Ramadi, Iraq, in 2005. “The leadership you learn serving in an infantry unit in a combat zone is like no other.”

Tate’s time in the Corps played a major role in his success as the founder and president of his own nonprofit, as well as an animal-rights advocate. “The Marine Corps taught me to stand up for what’s right,” he says. Additionally, the VETPAW teams that deploy to African countries still maintain a similar military leadership structure that Tate learned in the military, offering a clear hierarchy to effectively perform their missions.

After leaving the military

After separating from the Corps in 2007, Tate started his bachelor’s degree at Santa Fe College; however, while in college, he was offered a job on the security detail for then U.S. Ambassador to the United Nations Dr. Susan Rice. Because he was in the U.S. Department of State, he was at the front lines of country-to-country diplomacy, which he says helped him figure out the path he wanted to take. “I really wanted to understand the jobs of the people around me,” Tate explains. “I started really to come into tune with the things going on in the world and why there are going on.” Specifically, Tate became aware of the influence of non-governmental organizations and realized you don’t need to part of a large, first-world government to make a difference.

While Tate had a successful, well-paying job, he wanted to do something bigger and more fulfilling. “When I got out of the Marine Corps, there was just nothing comfortable,” says Tate. “I really struggled to find my place. I was doing what I thought I was supposed to do.”

It was at this time that Tate started researching what was really happening on the ground across Africa in regard to wildlife poaching and the terrorism element of it. Employment at the State Department also offered him access to influential leadership and information that further inspired him to pursue his goal of protecting African wildlife. According to Tate, “Rangers are dying at an alarming rate due to the increasingly militarized poaching elements. Several terrorist organizations fund their operations on the profits gained from rhino horn and elephant ivory, so these groups see to it that poachers have heavy weaponry and high grade equipment.”

While his colleagues warned him about the threat that terrorist groups posed because of their investment in the poaching industry, Tate says it only furthered his desire to help.

Being his own boss

VETPAW officially launched in 2013. As president of VETPAW, Tate’s job is to keep the organization running “like a highly tuned Formula One car.” Much of his role includes developing and maintaining healthy relationships with foreign governments, U.S. government entities, and non-government organizations working in the region.

Additionally, Tate is responsible for finding highly trained and diplomatic former service members to train and assist anti-poaching park rangers in combating African wildlife poachers. Because veterans have the specialized background to engage effectively in such a complex environment, they are a natural fit as the implementers of VETPAW’s mission.

VETPAW is unique in that it takes men and women who have already given so much in combat zones a world away, and provides them with a new opportunity and outlet for their skills to serve and protect those who cannot protect themselves. “Bottom line is we’re giving veterans a chance to once again better the world,” Tate explains.

“Whether you’re in school or recently graduated, find yourself a strong civilian mentor,” Tate recommends for service members transitioning out of the military. “Find a mentor that can assist you in developing new tools, then combine them with leadership you gained in the military, and you’ll be unstoppable. Military leadership translates best when you have a civilian mentor that helps you to develop finesse.”

Tate’s second piece of advice he directs toward “dreamers” like him. Quoting film director Darren Aronofsky, who he saw speak at a panel discussion on wildlife in films, Tate says: “If you’re passionate about something so much that it hurts, scream it at the top of your lungs for the world to hear. There’s nothing wrong with being edgy.”