JOB ENVY: The Marine Reservist Rebuilding The City Of Detroit 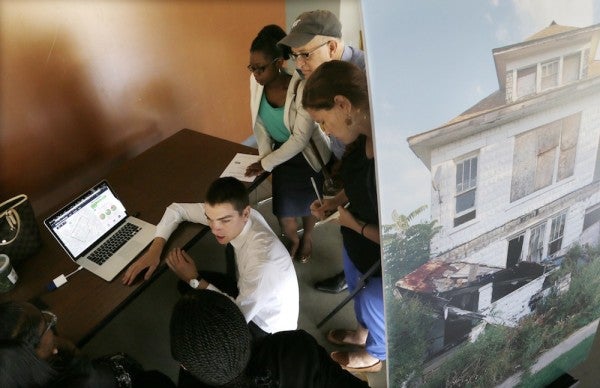 Every year, men and women who bravely serve America in the armed forces continue to help our great country through acts of public service, non-profit, and volunteer work, rebuilding parts of the U.S. left vulnerable by the recession. At only 26, Sean Seabright Jackson is one of these service members. The California native and Marine Corps reservist works for Rock Ventures, a real estate investment company headed by founder and chairman of Quicken Loans, Inc., Dan Gilbert, and is leading initiatives to help revitalize the city of Detroit, Michigan.

Task & Purpose recently spoke with Jackson about his experience.

His time in the military.

Jackson joined the Marine Corps reserves when he was 19, then living in Laguna Beach, California. As a civil affairs advisor with 3rd Civil Affairs Group, he’s worked with local leaders around the world to address challenges that affect the lives of thousands. In 2012, Jackson supported economic and governance development initiatives while working with the civil-military provincial reconstruction team to increase societal capacity and stability in Helmand province, Afghanistan. He also deployed to Haiti in 2011 during a humanitarian intervention.

“Working on the ground with a combination of non-governmental organizations, U.S. agencies, and foreign governments has exposed me to a myriad of different problem-solving philosophies,” Jackson says.

While in the reserves, Jackson also completed a bachelor’s degree in international relations at the University of California, Santa Barbara. His studies focused on relations between nation states and nation building. “The world of academia, with its models and clean causality, necessarily simplifies complex issues, however the insights drawn from this analysis have real, practical value,” he says.

Ultimately, Jackson’s military experience in civil affairs and his academic background put him on a path to becoming a problem solver.

Making the revitalization of Detroit his mission.

After his deployment to Helmand, Jackson wanted to use his experience to help support his country. “After working with the economic development teams in Afghanistan, I knew that I wanted to focus on helping rebuilding the economy of great American cities when I returned home,” he says.

In 2013, Jackson applied for a two-year fellowship with Venture for America, a non-profit organization that works to connect recent college graduates with start-up businesses in emerging cities, a decision he calls one of the most pivotal of his life. According to Jackson, the goal of the organization is to train the next generation of entrepreneurs and put them in places where they can grow both their companies and their cities, and ultimately revitalize America through entrepreneurship.

After a five-week training camp, Jackson was sent to Detroit where his boss, Dan Gilbert, volunteered him to lead the Motor City Mapping Project, which worked with local residents to survey and map 380,000 properties in the city to better understand the physical condition of each property and track the spread of blight. He also authored three chapters of the Detroit Blight Removal Task Force Report, outlining a strategy to determine which properties needed to be destroyed and which could be saved.

“Everyday we are removing the cancer that is blight from the city of Detroit, and helping the rest of the world see the potential this great American city has to offer,” Jackson says. With nearly 250 demolitions being completed each week and numerous other revitalization programs underway, the goal of the initiative is to eliminate all blighted properties from Detroit within five years.

These days, Jackson works with the Detroit Land Bank Authority to build operational systems to track the massive blight elimination efforts underway. He says the tools that helped him succeed in the business world are the same as those he used in the military: “You need to be able to figure out how to get stuff done. Entrepreneurial hustle is the same thing that all good commanders and noncommissioned officers have, the ability to take a vision and figure out how to get it done, period.”

Jackson points out that a major advantage veterans have is that they started solving serious problems at a much younger age than their non-military peers. “A 20-year-old Marine corporal has years of experience making sure that his Marines stay alive. Those without military service won’t have had that level of responsibility for another decade,” he says.

Therefore, owning the fact that the military “makes you to be scrappy, adaptable, and gives you confidence work on problems that don’t seem to have easy solutions” is a solid way to set yourself up for success.