How I’m Surviving My Battle With PTSD

Have you given up on ever having a normal life after you experienced a traumatic event? It does not necessarily... 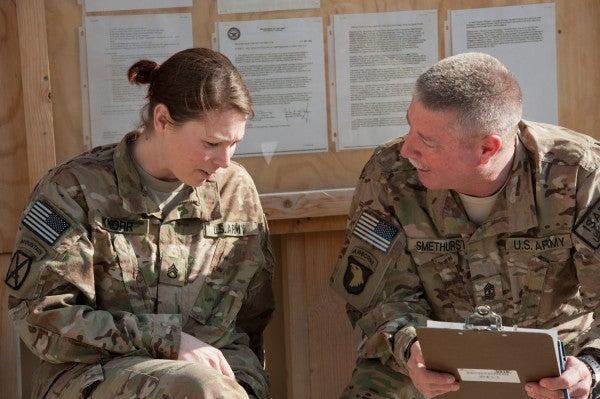 Have you given up on ever having a normal life after you experienced a traumatic event? It does not necessarily have to be a war time event. It could be other types of trauma that have contributed to your current state of being, such as rape, battery, tragic deaths of loved ones, car accidents, etc. Whatever horrible event has caused your current state of duress, I am here to tell you that there is hope for you. You just have to be willing to believe and have a desire to do the hard work.

Overcoming post-traumatic stress disorder is by no means an easy process. The longer you have had PTSD, the more difficult it is to get through the work. However, I am living proof it can be done. For the better part of 20 years, I suffered from anxiety and depression related to PTSD from Desert Storm. I had PTSD before it was even acknowledged that Desert Storm veterans were suffering from it. I just knew I had anxiety over almost anything, especially all the health problems I brought home from Saudi Arabia. I remember sitting on my living room couch in Orlando and upon hearing the fire engine and ambulance sirens, my heart would take off in a gallop and sweat would break out on my forehead. I really didn’t connect it at first to Desert Storm, but over time, I realized the sirens reminded me of the air horns going off when we were under threat of chemical attack. Over time, my anxiety worsened upon fighting with the Department of Veterans Affairs over compensation and getting proper medical care to the point where I was in near panic mode just upon entering the Orlando VA medical facility. However, things began to look upward after I moved to Miami in December of 2007.

In 2008, I was put under the care of Behavioral Health and was given a regular psychologist. I told them about my anxiety and depression from Desert Storm and what triggered it the most. I also told them about the military sexual trauma I suffered at my first base when I was 18 years old. I was raped by a sergeant from my squadron in my dorm room. I told them how I was beaten by my boyfriend who was in the Marine Corps in 1983. I thought he was going to kill me when he put a gun to my head and told me, “Bitch, I’ll blow your head off.” I was severely traumatized by both events, but at that time I didn’t really know how deeply my psyche and subconscious was affected until I began discussing it with my mental health care team at the Miami VA.

I started out with cognitive behavioral therapy. I had such a hard time with brain fog that I couldn’t focus enough to do the required work. Needless to say, I repeated it over and over again until the tenets of therapy started to stick with me and I saw a tiny little light at the end of the tunnel and started thinking maybe there could be an end to the suffering.

A doctor also suggested that I try a new mixed group (male/female) dealing with military sexual trauma and PTSD. I went to the first group meeting and was surprised to see men in the group as I admit, I had never thought about men being the victims of military sexual trauma. Oh boy, though, would I learn a lot in the coming months. No one was required to say anything if they were not comfortable speaking about it, and weeks could go by before some of the veterans even said a few words. That was certainly understandable considering the types of trauma people had endured. Things began to click for me and one day during the meeting, I had one of those Oprah Winfrey “Aha moments,” and realized I was now a survivor of military sexual trauma and PTSD.

In our meetings, we did therapy where we analyzed our “stinkin’ thinkin” as I liked to call it. We wrote down something that had happened during the week and what we thought about it. Then we were asked to see how we could look at the situation or what we thought about it differently and see a different outcome. Over months, we worked up to “exposure therapy” where you pick a particular event or place that has been very intimidating or challenging to you and you make an attempt to go there and work through it and make notes on how it goes. For example, I couldn’t bring myself to go to the beach, something I really used to enjoy when I was younger. For all those years, I had no idea how my self-esteem was so horribly affected subconsciously by being raped. It took me several weeks to actually have the courage to walk out onto the beach in my swimming suit and and sit there for a few minutes, let alone get in the water.

You might say to yourself, “What in the hell does that have to do with my PTSD from Abu Ghraib or Kandahar or Hindu Kush?” Trust me, it has a lot to do with it and how your brain processes trauma. Needless to say, exposure therapy can take time when you are trying to relearn how to just be in large crowds, it it’s worth it.

Eventually, it was time for intensive cognitive processing therapy. In this stage, I developed a bond with my therapist and learned how to take ownership of problems and what to do best in any situation I might find myself facing. I did over a year and a half of individual cognitive processing and I survived it. Some days in therapy I still felt a disconnect between my head and my heart, but over time it started clicking.

The day I was contacted about writing for Task & Purpose, I had just learned that I had “graduated” from my therapy program. What a sign that I had made the right choice by getting the therapies I needed after all I had suffered since 1991. And while I will never forget the trauma that I went through, I now know that those experiences don’t define me and will never again control my life.