What I’ve Learned About Transition As A Veteran Living Abroad

In 2014, my younger brother, also a combat veteran, died in a motorbike accident in Thailand. All our lives, we... 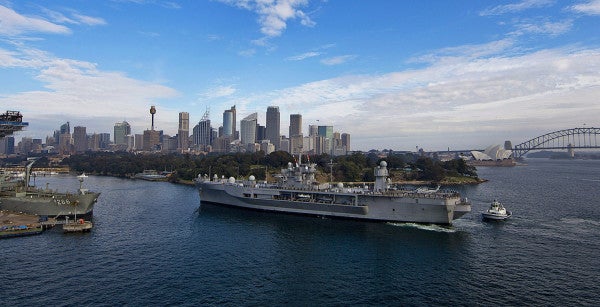 In 2014, my younger brother, also a combat veteran, died in a motorbike accident in Thailand. All our lives, we had been fiercely protective and loyal toward each other. I had served with the Army Reserves as a civil affairs officer in Iraq from 2004 to 2005. After I separated from the military in 2007, struggling with anxiety from war, he joined. I provided guidance from the states while he was in Iraq. When he came home in 2010, I thought the big worries of my life were over; that if I stuck to my plan, life would all work out. But when he died, my life ended, too. When he died, I needed to build a new life, or I would have become mired in grief permanently. I moved abroad to Australia.

The transition felt like basic training all over again. A U.S.-based IT contract unexpectedly ballooned into a massive endeavour. My life became a flurry of seemingly simple tasks that had to be completed under immense pressure. I simultaneously adapted to a different culture.

For my first conference call in Australia, I found myself in a street-level garage, sitting on a turned-over mop bucket. My laptop rested on an empty milk crate plugged into an outlet meant for a washer. I used one hand to dial the international conference number. I used the other to cross my fingers that the washer outlet wouldn’t cause my laptop to go up in flames.

My clients asked on the call, “Where are you?”

I looked around the garage, thinking they heard the echo.

They clarified, “Are you in Australia yet?”

But that was just the beginning.

Every day I woke up and fell into the day. I had to let go of my ego. The first time I took a bus, the bus driver let me ride for free. I didn’t understand that I was supposed to buy a travel card from a newsstand beforehand. It’s easy to become frustrated when basic competencies like using public transit pose a challenge.

I plied every ounce of focus into my transition. The first few weeks were filled with close calls and an erratic sleep schedule. Struggling to adapt to the time difference, I overslept 20 minutes into a conference call. I joined the call just in time for someone to call me out by name.

Instead of seeking care from the Department of Veterans Affairs or a therapist, I learned to repair myself. The end of the American workday was 8 a.m in Australia. Once a week, instead of sleeping, I rode the bus to the beach. After a bit of hiking, I settled in on an empty stretch of sand.

Whatever was ailing me, I handed it over to the ocean. Once it was the stress of not knowing the future. Once I sobbed and asked the ocean why my brother had died, and not me.

After a few months in Australia, I had a job interview. But, I chose to call a friend back home instead of preparing. I did the interview. I went to the beach.

I knew I wouldn’t get the job. I looked around at the wide open water. I listened to the waves roll on the shore. I took in the devastatingly gorgeous cliffs. But I didn't feel rejuvenated. I felt alone. The great open space that had served as my therapist for several months felt empty. The physical isolation reminded me of my personal isolation. Social isolation is dangerous for anyone. For veterans, it can be a killer.

That evening, I walked into the kitchen of the youth hostel I was staying in. I announced I would be going to the crab races at a local bar and anyone would be welcome to join. One man shouted back, “I’ll go.”

He turned out to be Australian. At the crab races, I made fun of my American-ness. I said “G’day, mate” with an exaggerated accent. He laughed and informed me no one says that.

On another outing to a pub quiz on Anzac Day, I boldly shouted, “What’s an Anzac?” He laughed at my impish behavior. He explained it was a day of mass casualties for Australian and New Zealand soldiers in World War I. I nodded.

We took last place in the pub quiz. The host took pity on us and awarded us a prize: a free pitcher of beer. We cheered.

The final key to living abroad was easier said than done. In a funny way, I had participated in a community event. The host's last-prize award made me feel welcome in my new surroundings. The chat on the way to the store made me feel connected to another person again. All of these things gave me a sense of belonging; something I hadn’t felt for a long time.

That stroll to catch up on grocery shopping marked the completion of my transition. I was no longer a former service member trying to get away from my past; I was a woman, who happened to be a veteran, moving forward with my happy little life abroad.