There’s No Such Thing As The ‘Congressional’ Medal of Honor

It’s a myth so widely dispersed that even military publications are in on it — falsely referring to the nation’s... 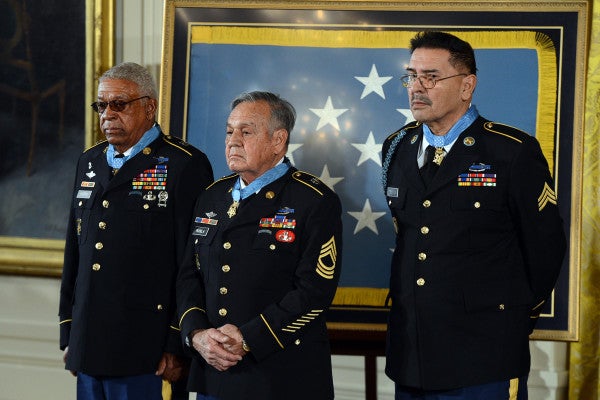 It’s a myth so widely dispersed that even military publications are in on it — falsely referring to the nation’s highest award for valor in combat as the “Congressional” Medal of Honor. But as I staunchly maintain in violent Twitter fights, it’s just the Medal of Honor. So why do people think differently?

The Medal of Honor is awarded by the president of the United States for valorous actions in combat. It is a heralded honor reserved for those actions so selfless in the line of fire that many recipients are awarded the medal posthumously.

There have been more than 3,500 Medals of Honor awarded to America’s service members since the award’s inception in 1861. For veterans of Iraq and Afghanistan, there have been 16 recipients, seven of whom received the award posthumously.

The award is often erroneously called the “Congressional Medal of Honor,” but it’s an award whose recipients are chosen exclusively by the executive branch. The Department of Defense nominates recipients who are ultimately approved by the president. The History Channel and official Army sites each have sections dispelling the myth that the award is called the “Congressional Medal of Honor.” Additionally, each branch's official awards order refers to the medal only as the “Medal of Honor.”

The second reason for the “congressional” myth seems to stem from a line in the U.S. code outlining the award. The law says that the president awards the medal to the recipient “in the name of Congress.” That section of the law, 10 U.S. Code § 3741, also calls the award the “Medal of Honor” on all references. The “Congressional Medal of Honor” myth is so widely dispersed that a separate U.S. federal law passed just last year, 18 U.S. Code § 704, refers to it, but that’s a narrow law that doesn’t outline the Medal of Honor; indeed, it defines it via a series of federal statutes that refer only to the “Medal of Honor.” Congressional staffers are subject to myths, too.