Thank You, Ronda Rousey, For Speaking Up About Suicide

Former UFC champion Ronda Rousey made headlines earlier this week after she candidly revealed that she contemplated suicide after her... 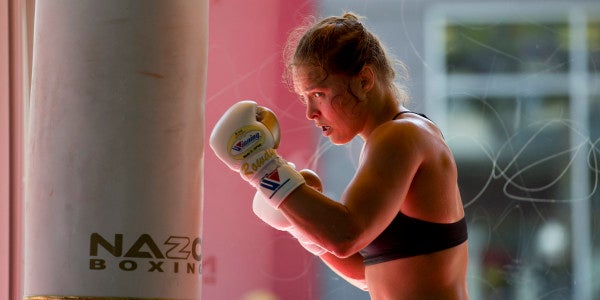 Former UFC champion Ronda Rousey made headlines earlier this week after she candidly revealed that she contemplated suicide after her stunning upset loss to Holly Holm this past November.

Speaking to Ellen Degeneres on Feb. 16, Rousey admitted that when she was in the hospital after the fight, she was literally thinking about killing herself, questioning, “What do I do anymore? No one gives a shit about me anymore without this.”

Her candor was met with mixed reactions fromfellow MMA fighters, former boxing heavyweight champs, and, of course, a myriad of different people in the comment sections of blogs and articles throughout the internet.

However, the ripples in discourse that this powerful revelation has stirred up is both refreshing and desperately needed, especially considering the lack of discussion surrounding mental health in this country and the suicide epidemic plaguing our veterans and active-duty service members.

Thoughsome counts vary, post-9/11 veterans have a suicide rate 50% higher than their civilian counterparts, and almostone active-duty service member dies each day by suicide. This is a devastating problem within our warfighter community and why I believe Rousey’s comments were pivotal in continuing the national dialogue about suicide.

When I was perusing the comments sections on different articles I was excited to see very supportive comments regarding her statement. However, they were certainly in the minority. What was more prevalent and pervasive were comments from a plethora of armchair psychologists stating things such as:

“This is honestly incredibly disrespectful to people who actually battle depression… The fact that she considered SUICIDE after losing ONE FIGHT is just a slap in the face to all the people who really suffer from this. Pathetic.”

As a veteran who has contemplated suicide and has experienced the loss of fellow veterans to suicide, I could not disagree more.

Arguably the most important thing Rousey did by candidly discussing her suicidal ideations on national television was break down the barrier surrounding suicide by humanizing it. Her statement was certainly not “a slap in the face,” rather more like a warm embrace for other people who have felt the same way.

In a 2014 survey released by Iraq and Afghanistan Veterans of America, 40% of respondents knew at least one post-9/11 veteran who has died by suicide and 47% know at least one that has attempted suicide. And consideringsome units are hit disproportionately with members dying by suicide, and suicide numbers for female veterans are “staggering,” the most important things for suicidal veterans to understand is that they are not alone. Without discussing this with other people, especially those closest to you, the road to recovery is long and obstructed.

Similarly, not only was it important for Rousey to be so vulnerable during her interview, it is extremely helpful that she is perceived as a “universally acknowledged badass.” Sound familiar? The United States has the best military in the history of the world, built by 200-plus years of veterans fighting bravely for their country, which is why so many of us hear things similar to Rousey’s criticism.

Ask any veteran who has lost a fellow vet to suicide and it’s eerie how similar their responses are. Most have to explain that the victim of suicide was the toughest person in their unit, the baddest on the battlefield, or the most squared-away person they knew, while having to reconcile why they didn’t know what was going on inside the head of the person they admired.

Veterans often go out of their way to avoid discussing their struggles because they are more concerned with how we will be perceived and are afraid to be stigmatized for having an invisible wound. This will continue until our veterans feel safe enough to be more open about their struggles with suicidal ideations and leading the charge to change the status quo,like when Medal of Honor recipient Sgt. Dakota Meyer bravely discussed a suicide attempt in his harrowing memoir.

The backlash against Rousey for discussing this incredibly sensitive topic insinuates that there is a right time and circumstance for suicide, but this wasn’t it. However, nothing could be further from the truth. People with suicidal ideations shouldn’t be looking for justification, they should be looking for help, and unless we, as a society, begin to tear down the wall that prevents us from treating a mental health problem differently than a physical health problem, we will continue to lose some of the bravest women and men who have fought for our country.